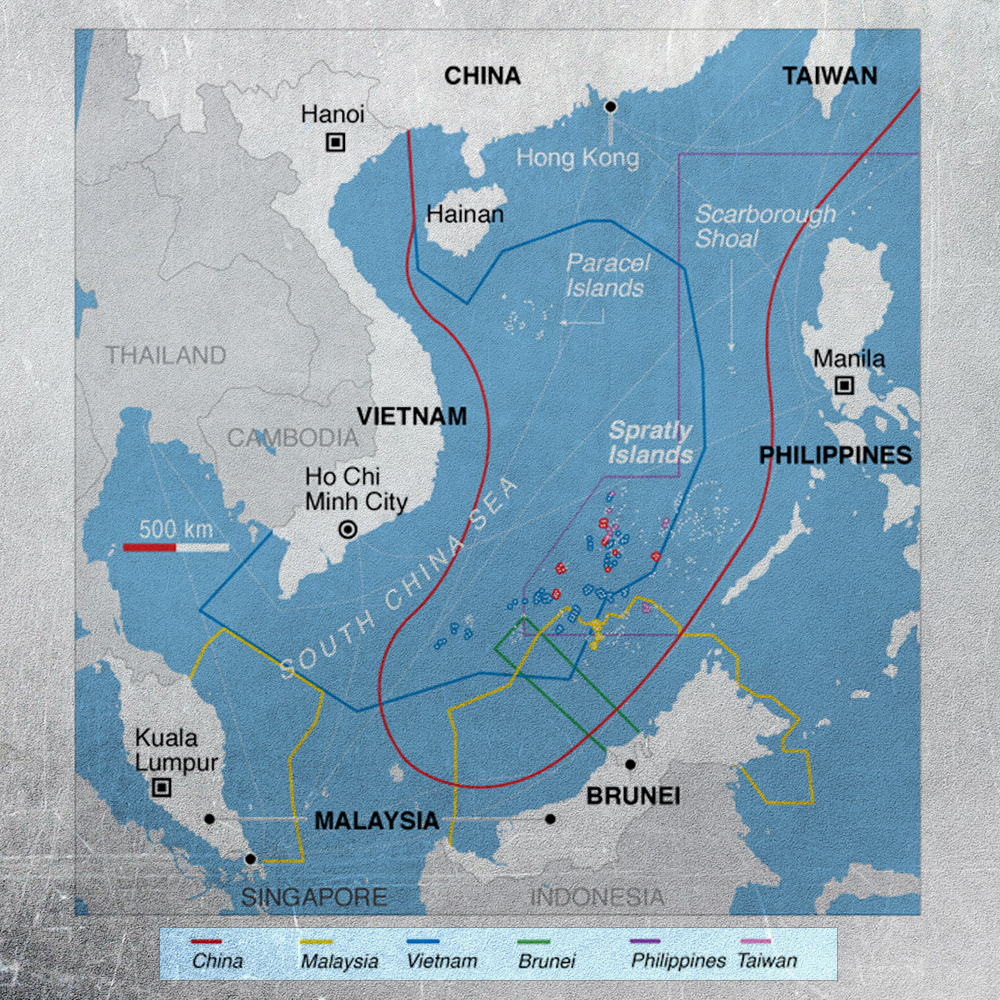 On December 15, 50 miles North-West of the Philippine Subic Bay submarine rescue vessels of the People’s Liberation Army (PLA) Navy with hull number 510 (project type 922-IIIA, under NATO classification “Dalan-IIIA”) intercepted a radio-guided Unmanned Underwater Vehicle (UUV) of the LBS-Glider type, launched from aboard the oceanographic vessel Bowditch (programme “Pathfinder”) of the US Navy. The American ship allows the performance of hydrophone scanning of the waters, seabed mapping with high accuracy using a towed acoustic station of the SURTASS type and low frequency LFA buoys. Four search sonar stations, located in the body, allow the successful detection of all modern submarines at depths of up to 450 metres, as well as other submarine vehicles, systems of sonar surveillance and even cables. 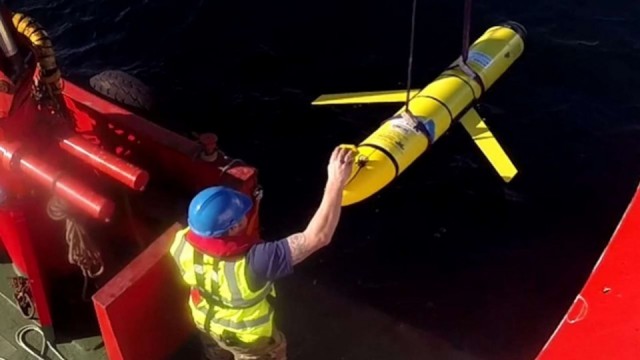 The use of UUV is of greatest concern to the Chinese military, since this technique allows cutting underwater cables, already connecting the island garrisons on the artificial islands composed of the Xisha and Nansha archipelagos, as well as those who in the future will connect the military units on the mainland with the garrison on Scarborough Shoal (the latter still a draft).

Some American experts believe that the UUV, caught by the Chinese military, “will go for parts” for subsequent copying, but the drone was returned to its owners five days after the incident. The reason for such a fast return of the US drone, in fact, lies on the surface. The staff of the Shenyang Institute of Automation of the Academy of Science (AS) of China, in 2003 began the development of their own drones, which were submitted for testing in 2008. Since then the production technology has improved and for the Chinese specialists the American construction was not surprising. It is known that the UUV LBS-Glider was disassembled, special instruments made it possible to assess the capabilities of the lithium-ion batteries and acoustic sensors of American manufacturing.

According to Chinese media, the Chinese equivalent of the LBS-Glider UUV under the designations “Sea Wing” and “Deep Search 100” were successfully used for five years for mapping the seabed of the South China Sea. Hydrography ships “Practice 1”, “Science 1”, “Ocean 6” and “South Peak” carry the UUVs. Officially, the first three ships work in the interests of the Academy of Science of China, and the fourth answers to the Office for Affairs of the Sea. Currently theses ships are laying cables from the mainland to the artificial islands. The reason is quite simple: there are only two special cable-laying ships at the disposal of the PLA Navy: one in the Eastern fleet and the second was integrated this past December into the South fleet.

The American Navy regularly heats up the situation in the South China Sea. The “operations for the protection of freedom of navigation” that they carry out serve in fact to cover up the annual exercises in maritime warfare together with the navies of Australia, Singapore, Taiwan and the Maritime Self-Defence Forces of Japan.

The Chinese military closely monitors their American counterparts and at the same time systematically implement a program of weapons placement, military and special equipment on the nine artificial islands. It is well known that on Zhubi, Yongshu, Yongxing and Meiji runways were built and tested. On the first two islands the length of the runway is 3000 metres, and on the third and fourth it is 2700 metres long.

According to satellite images analysis it is clear that these runways are suitable for all aircraft in service of the Navy and Air Force of the PLA: from the front-line fighter bomber Jianhong-7A to the strategic bomber Hun-6K and the transport IL-76. On other islands helicopter landing pads were also built.

According to media reports in China, on the man-made islands there are 72 Jian-11b fighter jets already posted, which will carry out air patrols and covering the islands and ships from air strikes. For the Chinese military, the aircraft allows the use of anti-submarine ship Ying-62, -83 to combat surface enemy ships at a distance of up to 450 km. The Jian-11B is able to counterattack the carrier-based F/A-18E/F fighters and the EA-18G for electronic warfare of the US Navy. In this situation the pilots of the PLA Navy will use the container system of electronic warfare and long-range anti-radar missiles Ying-91.

In the event of an armed conflict between the navies of the US and China in the artificial islands sector the Chinese military will use the Jianhong-7A as mentioned previously; its crews regularly in their exercises fire aircraft torpedoes “Air 3-500” and depth bombs Shen-3A. To counter the radar of surface enemy ships and the destruction of their air defences/missile defences, the Jianhong-7A pilots will use the anti-radar missile Ying-91, and for self-defence, will use the air-to-air SD-10. The AWACS KunTszin-200 will provide coordination for the aviation with early warning and control. It is known that its airborne radar allows the detection of 500 air and 500 surface targets simultaneously at a distance of up to 400 km at a flight altitude of 10,000 metres. With a unified digital system of data exchange standard of 1553 it is possible to transmit information on targets such as other aircraft, as well as ships and missile boats.

The main task of the Hun-6M strategic bombers is the destruction of the destroyers of the US Navy, equipped with the air defence/missile defence Aegis. 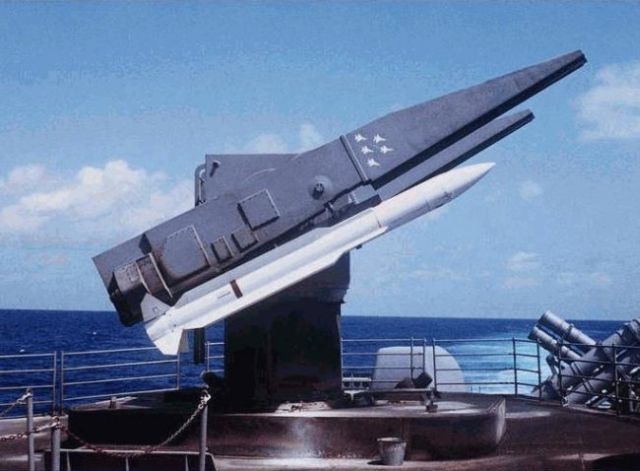 The main weapons system of the Chinese missile carriers is the supersonic missile Ying-12 (with speeds of up to Mach 5.5), which will prevent the Hun-6M of entering the air defences zone of the American ships. The rocket launches will be carried out on targeting information from the KJ-200 AWACS aircraft.

For the air patrol operations over the waters of the South China Sea there are two versions of tanker aircrafts for providing support, namely the Hong-6U (from the 17th regiment of the 6th Bomber Air Division) and IL-78, which was built on the Russian transport IL-76-MD base by Ukrainian specialists with the use of their components. The maximum capacity of fuel tanks of the Hun-6U is 37 tonnes, but in a real wartime situation the aircraft will have a load of 20 to 30 tonnes of fuel, which will allow the crew to fly 1000 kilometres to the refuelling area, service four Jian-11B fighter jets and then return to base. The IL-78 for the same range can service from 8 to 10 fighter jets at a high enough speed, as equipped with the new refilling complex “ORM-1M” with pumping speeds of 2340 litres per minute. It should be noted that the fuel-distributing apparatus of the Hun-6U allows servicing two fighter jets at the same time, while the IL-78 is able to refuel three aircraft.

It is clear that in addition to the aviation, naval forces of the PLA will be stationed on the artificial islands. According to experts of the Chinese corporation “China North Industries Corporation” (NORINCO), any class of ship can be deployed on the naval bases on the artificial islands of Zhubi and Meiji, as well as aircraft carriers. The depth at the berths is sufficient and the engineering structures guarantee a reliable anchorage for ships with a displacement of 20,000 tonnes or more.

Berths at the naval base on the island of Yongshu allow the permanent deployment of the TFR project 054A, the destroyer pr. 052C/A and the amphibious assault ship/helicopter carrier pr. 071 (Mistral class), as well as ships of lesser displacement, such as corvettes, minesweepers and missile boats. It is known that on these three islands there are already a few missile ships pr. 022, which can destroy large surface enemy ships with their SAMs. 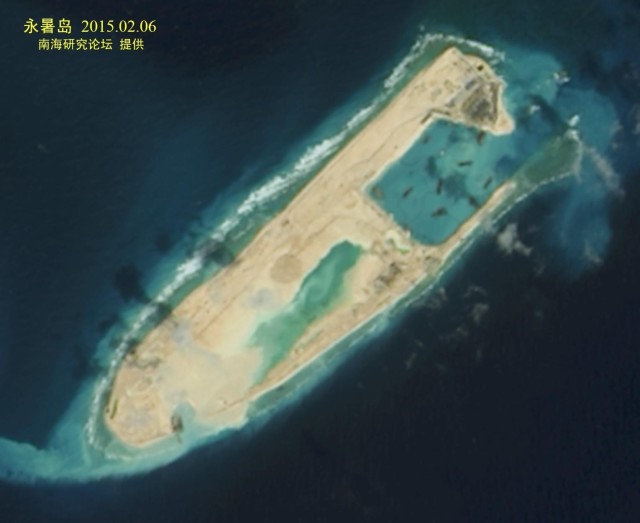 The formation of fuel reserves on the island bases, as well as centres for repairs and maintenance of machinery will allow the Chinese Navy to deploy on a regular basis in the Xisha and Nansha archipelagos a search group of about 30 surface ships, as well as a mixed force of diesel-electric submarines and nuclear submarines. It should be noted that a similar number of surface ships of the South Fleet of the Chinese Navy is specified in the strategic requirements of the command of the “Defence of the Near Zone and Protection on Long Campaigns”. Incidentally, the ships of the Chinese Navy providing year-round patrols in the South China Sea, periodically “expel” ships of the US Navy from the 12-mile border zone.

There is information that the naval search and strike groups of the South Fleet will be built on the following two principles. 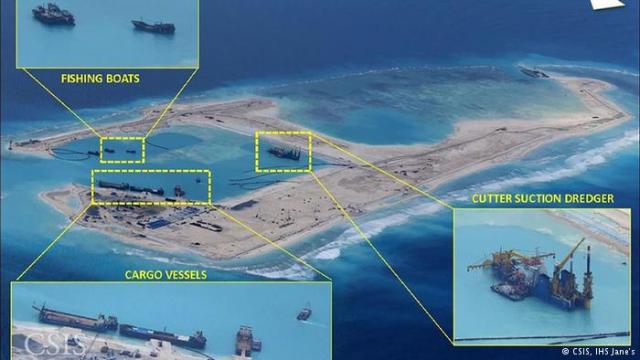 The first concept is the “Four Steel Borders”. The composition of the strike groups includes destroyers pr. 052C/A which provide air defence and escort surface enemy ships; TFR pr. 054A and corvettes 056A carry out the tasks of anti-submarine warfare, as well as carry out missile attacks based on target designation from coastal radars and other ships. The fourth element are large scout ships pr. 815A equipped with radio electronic suppression systems.

It is quite natural that on these islands radar with 360-degree coverage is placed for over-the-horizon station reconnaissance and aerial antennas. In addition, coastal launchers of different missile models have been observed, and units of the SAM Hongqi-9 are deployed to provide air defences, which in the future will be replaced by the more sophisticated Hongqi-26. The latter, according to some Chinese specialists, are analogous of the Russian S-400 system, however it is not yet possible to verify this assertion. Given the complexity of the tasks of air defence in conditions of heavy electronic countermeasures in fixed concrete positions, air defence systems are placed near borders, which provide protection with the above-mentioned SAM.

It should be noted that the location of Yongshu, Zhubi and Meiji (Nansha archipelago) is a triangle with sides of 295, 195 and 195 km. Yongxing is the central link for life support on the island garrisons, which is 810 km from Yongshu, and from Meiji to the potential garrison on Scarborough Shoal it is 625 km. When looking at the map it becomes clear that a significant part of the South China Sea basin is under the control of the PLA Navy ships and Air Force.

The American “shipping protection” may run into a steel border of man-made islands in the South China Sea.

Associate Professor of the Department of Regional Studies and Foreign Policy of the Russian State Humanitarian University, Candidate of Political Science, Maksim Kazanin.

This is a tactical error from China, its soft power initiatives were very successful and indicated China was playing the long game which it would almost certainly do very well in. China has instead chosen land grabing and confrontation in the South China Sea in violation of internationaly agreed 200 nm EEZ limits stoking old fears in its neighbors and allowing a containment coalition to be built against it. Now watch as Trump sends Kissenger in to try and woo Russia away from China and the Brix – seems the NWO has finally realized it was barking up the wrong tree and gone with its version of long game which will involve a WWIII against an isolated global bogy man China.

Seems we do indeed live in interesting times I did however expect the Chinese to be smarter.

Putin is no fool to trust that scum Zionist Jew politician. The Zionist scum thinks he still has the charisma to influence world leaders, LoL! It was reported Putin spend only about 40 minutes talking to him. hehehe.

you don’t understand, it has nothing to do with land grabbing

China MUST control south sea to secure its own survival. China is the biggest trading nation, and depends on imports of raw resources to keep its economy going. The US navy could easily blockade China in a war, therefore China must secure the islands in SCS and build static defences BEFORE a war starts.

This is an existential matter for the Chinese state