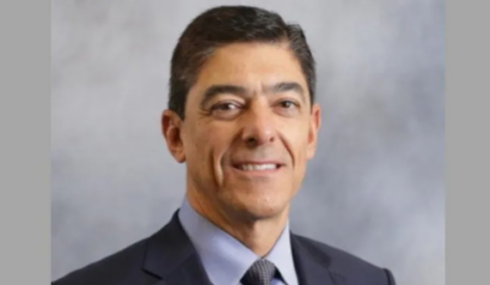 The CFO of Bed, Bath and Beyond, Gustavo Arnal, has been identified as a man who jumped to his death from the 60 story “Jenga Building” in Tribeca on Friday.

The 52 year old executive fell from the 18th floor of 56 Leonard Street on Friday and was identified on Sunday morning by the New York Post. The Post notes he had just sold 42,513 shares of stock on August 16, netting a little over $1 million.

In 2021, his total compensation was more than $2.9 million, which included $775,000 in salary. He joined the company in 2020 after stints working as chief financial officer for Avon and as an executive for Procter & Gamble, the report notes.

Bed, Bath & Beyond has been on a roller coaster ride over the last month, which shares running up to as high as $28 per share just days ago on a “meme stock” rally. It then saw investor Ryan Cohen exit his position in the company, sending shares plunging.

In the days following, the company announced plans to try and reduce costs and stave off bankruptcy, including a $500 million financing agreement in order to help pay its vendors. It released a statement about its strategic and business updates that will result in store closures and a reduction of its workforce. Its plan includes closing approximately 150 lower-producing banner stores and a reduction of 20% of its workforce.

But the measures didn’t convince the street. As we wrote on August 31, we spoke with at least one institutional trading desk specializing in consumer discretionary who said they’ve all but given up on Bed Bath & Beyond and left the ‘meme stock’ for the ‘apes.’

Subsequently, both the company’s debt and equity were downgraded.

Analysts from Raymond James called the plan “kicking the can down the road”, insinuating that it was just a matter of time before the struggling retailer faced bankruptcy. By the end of last week, the company’s stock had fallen back to single digits, closing with an $8 handle, down more than 65% from highs it set just days ago.

Go Woke, go broke and jump from a skyscraper in disgrace.

I bought an ice cream maker from that store. It worked okay but was very expensive.

Ukrainian Pravda
Reply to  The Crunge

I heard BB&B donated a whole bunch of them to Ukraine to help hide battlefield casualties from the public.

beyond not far away when zelensky is your coke dealer

Another Bilderberg Jew parasite down.

From what I heard, this was part of a marketing effort for BB&B to boost its mattress sales but somehow, the mattresss delivery guy’s GPS got scrambled by the Russians and he ended up laying the mattress on the sidewalk outside of a homeless shelter in Brooklyn instead. Those Russkies have some dark sense of humor..

Guess BBB should not have banned Mike Lindell,s My Pillow products from their stores. Guess he didn’t have a pile of My pillows to land on.

Southfront: How is the death of this shyster SPIC in New York City related to military-political events on planet Earth? The world is a better place without this high and almighty dead SPIC and millions of others like it.

Imagine offing yourself just because some greasy Jew teenager sold your stock.