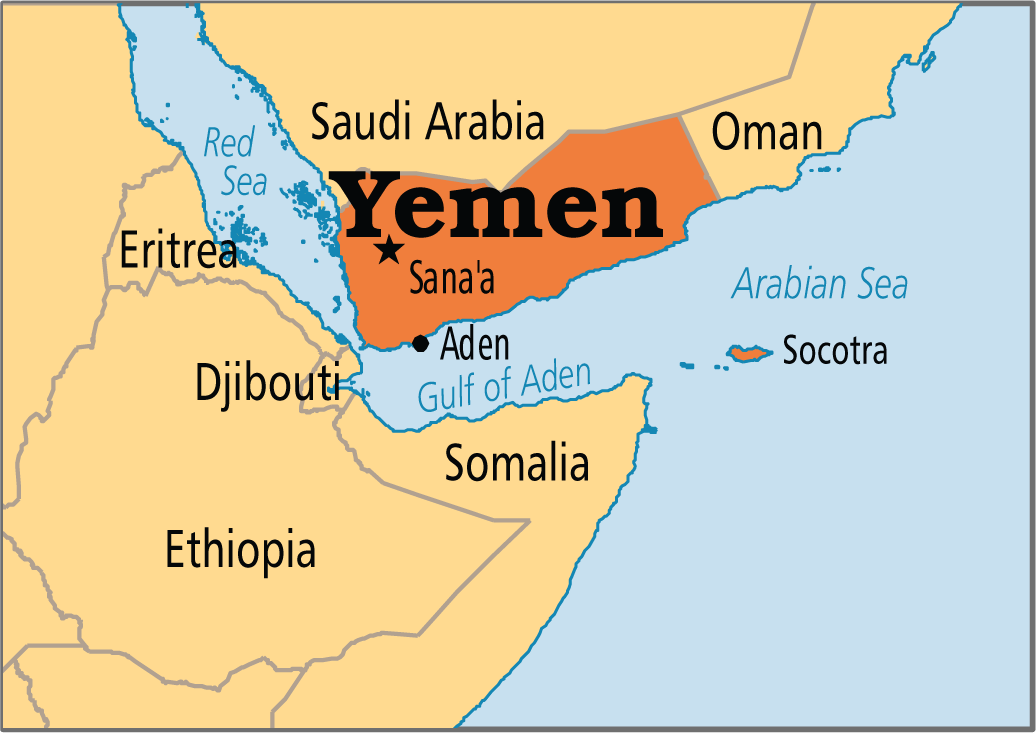 The strategically located Yemeni island of Socotra has once again become a major focal point for the battles for territorial control between the Saudi-backed  ‘Yemeni government’ nominally headed by Abd-Rabbu Mansour Hadi, who has been based in Riyadh for most of the last four years, and the Southern Transition Council, which is strongly supported by the UAE.

The most recent outbreak of disputes between Saudi-backed forces and the UAE-backed Southern Transition Council (STC) for control over strategic areas in Yemen has once again spread to Socotra Island, where the opposing forces are fighting for control over the main city on the island.

The conflict between the Hadi government and the STC itself became obvious several years earlier, in April 2017, when Hadi accused the governor of Aden, Aidarous al-Zubaidi, of disloyalty and dismissed him. Several weeks later, on 11 May, the STC headed mass protests against al-Zubaidi’s removal, with the former governor of Aden chosen to preside over the 26-seat council. The newly-created entity immediately declared its intention to ‘reinstate the Southern State’ – a reference to the former South Yemen republic. Hadi immediately denounced the STC as illegitimate.

Most of the military forces brought together under the command of the 26 members of the STC had previously existed as the ‘Security Belt’ forces, which from 2016 were provided military and financial backing by the UAE, with the associated paramilitary forces comprising an estimated 90,000 Yemeni fighters drawn from the southern parts of the country. They are one of the most battle-hardened and effective military forces in the country, and in 2015 the Security Belt forces provided the main fighting forces to secure territories in the south and recapture the port city of Aden from the Houthis (Ansar Allah).

The clashes between the allies of convenience began in earnest in August of 2019 when the STC attacked positions in Aden held by the forces of Abd-Rabbu Mansour Hadi and the Saudis and took effective control of the city, the temporary seat of government. The fighting died down and eventually stopped when the two groups reached a deal in the Saudi capital several months later, ‘the Riyadh agreement’, with the objective of forming a unity government.

But sporadic clashes have continued over the ensuing months, with friction escalating since the STC’s declaration in April of this year that it intended to exercise emergency rule directly in areas under its control rather than continue recognizing the authority of the Saudis and the administration of Mansour Hadi, a possible step towards separating from Yemen and reconstituting the autonomous State of South Yemen (which existed from 1967 until 1990).

When it announced the decision to impose direct emergency rule in April, the STC accused the Hadi administration of corruption and mismanagement. Alkhader Sulaiman, a spokesman for the STC based in the United States, told Al Jazeera that:

“This is not an event that just sprung out of nowhere. This is a pile-up of mismanagement, misgovernance, especially in south Yemen, which has been Houthi-less for four years now. Unfortunately, things have deteriorated humanitarian wise. The situation, in terms of basic services, is minimal.”

The ‘foreign minister’ of the Hadi administration, Mohammed al-Hadhrami, in turn accused the STC of violating the power-sharing agreement signed last November in the Saudi capital, Riyadh.

“The announcement by the so-called [Southern] Transitional Council of its intention to establish a southern administration is a resumption of its armed insurgency … and an announcement of its rejection and complete withdrawal from the Riyadh agreement.”

The period since has been marked by alternating periods of negotiations, recriminations and clashes as each side has attempted to secure their respective positions.

The latest clashes in Socotra broke out several days ago, and it appears that the STC have managed to secure control over most key facilities in and around the capital of Socotra. On Friday Middle East Monitor reported:

Forces of the UAE-backed Southern Transitional Council (STC) today captured the building of the Socotra Security Directorate in Yemen, according to a local official.

The Yemeni official, speaking on condition of anonymity for security reasons, told Anadolu Agency that the STC forces took over the building located in the western region of Hadiboh, the capital of the province.

The official stressed that the clashes between the government forces and the STC militia are ongoing, as the latter is trying to advance towards taking over the city of Hadiboh.

Another government official told Anadolu Agency that “the STC militia launched an artillery bombing on neighbourhoods and houses, in an attempt to advance towards the city of Hadiboh and take control of the centre of the province.” LINK

On Saturday (20 June) a spokesperson for the Hadi administration said that the militia of Southern Transition Council have staged “a full-fledged coup in the governorate of Socotra”. Yemen’s official news agency, citing an anonymous Hadi administration official, reported:

“The militias of the so-called Transitional Council in the Socotra carried out a full-fledged coup that undermined state institutions in the province.

These militias launched an attack with various medium and heavy weapons, targeting state institutions and citizens’ properties, and stormed government camps and headquarters as well.”

The official called on the Saudi-led coalition to help “stop the mess, chaos and aggression carried out by militia and implement the provisions of the Riyadh agreement.”

In a related context, a local source, preferred not to be named as he is not authorized to speak to the media, told Anadolu Agency that “the gunmen of the STC arrested Colonel Abdel-Rahman al-Zafni, commander of the Air Force camp in Socotra, and transferred him to an unknown location.” LINK

According to the ‘Emiratesleaks’ website, the STC have now effectively secured control over all key installations on Socotra Island:

Yemenis and Arabs expressed their anger at the United Arab Emirates’ regime for its militias to occupy Socotra island in eastern Yemen, as part of Abu Dhabi’s plan to divide the country and spread chaos and sabotage.

Activists started the hashtag “#احتلال_سعودي_اماراتي” (#Saudi-Emirati Occupation) to express their anger towards the UAE’s practices in Yemen and Saudi Arabia’s collusion with Abu Dhabi to take control of large areas in Yemen.

Tweeters pointed out that Saudi Arabia and the UAE launched their war on Yemen more than five years ago under the pretext of fighting the Houthis. However, Abu Dhabi and Riyadh have turned into occupiers.

The UAE-backed Southern Transitional Council today took full control of Socotra Archipelago, after controlling the Special Forces Camp, the last military base of the internationally recognized legitimate government, which did nothing but denouncing “the new armed coup” and demanded Saudi Arabia to intervene urgently.

A local official in Socotra said that the province was completely under the control of the separatists after months of tension, unrest and military buildup. “No fighting took place in the Special Forces Camp. A negotiation took place with its leadership to surrender, which is what actually happened,” he added.

Surrendering the Camp by negotiation was part of a strategy implemented by the Houthis when they first started the coup and invaded Sana’a in late 2014. The Southern Transitional Council appears to repeat the same scenario, especially after publishing footage from within the office of Socotra Governor Ramzi Mahrous, similar to the photos published by the Houthis on the eve of September 21, 2014, from the office of Lieutenant-General Ali Mohsen al-Ahmar.

The separatists also took control of the headquarters of the local council of the Qalansia district, which is the second most important district in the archipelago after Hadiboh, where they had a number of camps in the area in the past.

The separatists toppled the Republic of Yemen flags from government headquarters and military bases, and raised the flags of their supposed state “the Arab South”.

While the legitimate authorities could thwart a number of suspicious shipments, some of which carried weapons aboard, controlling the port of Socotra and the airport, the separatists are now able to receive any sea or air trips coming from the UAE, without any government oversight. LINK

The UAE has been committed to a controversial military build-up of Socotra Island since 2018, when it began deploying armoured vehicles and troops there. Then in May of 2019 Yemeni officials reported that the UAE had sent reinforcements consisting of hundreds more troops to Socotra, mostly from Aden where the Southern Transition Council had recently wrested control from the Saudi-backed forces of Mansour Hadi.

It appears that the UAE is attempting to secure control over Socotra with the STC providing the façade of a Yemeni-based armed movement, as it proceeded to build a military base there, attempted to secure control over the port, installed communications networks, and has been carrying out other development projects – as it has done elsewhere in Yemen in areas controlled by the STC, such as Aden and Mukalla.

Strategic control over Socotra Island would fortify the transport corridors for its oil exports as well as between the UAE and India, with whom it has important trade links, as well as to its military bases on the Horn of Africa, adjacent to Yemen and Socotra Island, located in the port town of Assab in Eritrea and Puntland and Somaliland regions in Somalia.

Just days prior to the latest developments, in a controversial decision the UN decided to remove Saudi Arabia from a blacklist due to the large number of children its aerial bombardments have caused in Yemen (which moreover excludes the number of civilian deaths caused by the economic blockade and military siege to which the people of Yemen have been held since 2015):

Campaigners reacted angrily on Monday after UN Secretary-General Antonio Guterres removed the Saudi-led military coalition from a United Nations blacklist, several years after it was first named and shamed for killing and injuring children in Yemen.

“The Coalition to Support Legitimacy in Yemen will be delisted for the violation of killing and maiming, following a sustained significant decrease… due to air strikes,” said the UN’s newly-published annual report on children in conflict zones.

It said the toll had fallen since an agreement signed in March 2019.

The announcement came on the same day that a Saudi-led coalition airstrike struck a vehicle carrying civilians in northern Yemen, killing 13 people, including four children, according to Houthi rebels.

Yemeni tribal leaders, speaking on condition of anonymity for fear of reprisals, told Associated Press that Saudi warplanes had targeted a vehicle in the Shada area of Saada province, a rebel stronghold, killing everyone inside. LINK

Battle of the headchoppers, may the bigger hacksaw win.

Is this Hasbara Hunter. :)

Anyone with a brain knew the Riyadh Agreement Was dead on arrival and in fact, it was dead even before arrival.

Overall a good article, informative, well written. My favourite line in the article really captures the reality of this S__tshow:

As I had predicted, it did not take long for the savage Wahhabi Bedouins to be at each others throats. The UAE petro-pimps have pissed off the Saudi cunts as they are normalizing relations with Syria, inviting a warming from the lardass pimp Pimpeo. The Saudis are increasingly marginalized, dead broke and taking a beating at the hands of the Ansarallah. Could not have happened to better arseholes :)

In which dream or fantasy was this?

He and Bolton were arguing over a hooker

It’s hard for me to get emotional about this. It’s kind of like Saruman’s Uruk-hai battling Sauron’s Orcs, eh, I hope they both lose. What would happen if the UAE and the Saudi faction fought like cats and dogs, not certain if this matters to N.Yemen. If the Saudi / Hadi faction lost, it would put an end to the myth of the ‘legitimate’ Yemeni govt but Pompeo would move onto his next lie to keep his war crimes going.