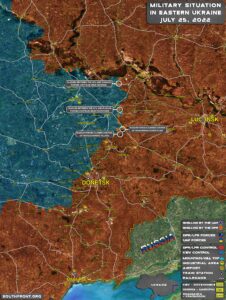 On July 25th, the the military of the Donetsk People’s Republic declared the beginning of mop up operations in the Vuhlehirska power station located on the western outskirts of the city of Svetlodarsk.

The first reports about the Russian military operations on the territory of the plant came late on July 24th. So far, the TPP reportedly remains under control of the Armed Forces of Ukraine. According to the reports from the area, the Ukrainian command left the area of the power plant and only small groups of Ukrainian servicemen continue fighting.

Russian military reporters are already working near the power plant: 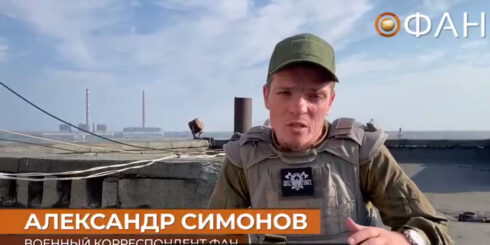 Before the beginning of the mop up operations, the Russian military destroyed the Ukrainian military positions in the area around the plant. The mayor of Gorlovka announced the complete blocking of the power plant. The AFU can only retreat along the road to Semigorye which is already under fire control of Russian-led forces.

On the same day, units of the Allied forces entered the own of Novoluganskoye, where clashes continue. The advance of Russian troops is complicated by mining of the main routes.

Russian control of the Vuhlehirska power station will pave the way for advance on the Ukrainian strongholds in the city of Bakhmut (also known as Artyomovsk).

Even the bots are checking their own posts.

That’s because even he can’t understand what the f^&k he just wrote.

CNN? Man, you just shot yourself in the head here, Maricon.

I am pro Russia but those soldiers in the last video look like clowns, especially that tall guy with that big trousers looks really weird

These are Luhansk guys.

slowly but surely the allied forces are destroying the NAZI formations of Ukraine.

Did you get that nazi soldiers? You are now a stain which needs mopping up.

Maybe the LPR, DPR and the Russian forces will let the women do it?

Bad day for the Nazis. Lots of one way tickets to hell. The 🤡 clown of Kiev should be getting one soon. There is always plenty of room in hell for their kind. The world will be a better place 🙏 when they are burning 🔥 in hell.

our 99% Lgbt military has a tranny admiral. you Russians like females—we prefer little boys ….this why we only train 9 year lgbt ukies to emigrate to oregun

Gay parade in Berlin in support of Ukraine.

Were you the one with the daffodils in your armpits?

Clear the area with a flame thrower.

Muhammad your Prophet
Reply to  Clyde

I can only count to 22 but only if I use my fingers, Exactly 11 on each hand. But first I have to take them out from my butt.

Count the dead then.

In war sacrifices must be made…fight to the last man…USA will avenge you!

First the US scavanges the Ukrainians for cannon fodder, then it avenges them?

Man, you are sooooooo f%^ked up.

Make those russian bastads pay for every inch… heheheh

The kooky ukie
Reply to  USA#1!

Momma’s calling from next door while she’s boozin’ & cruisin’ with your neighbor. It’s your bedtime, junior. Lights out.