On November 15, the  Russian military delivered missile strikes on terrorist targest in Syria, using Kalibr and Onyx cruise missiles. Onyx cruise missiles were launched by the Bastion-P mobile coastal defense missile system. This was the first time when the Russian system was used in combat condictions.

The Bastion-P is designed to engage surface ships including carrier battle groups, convoys, and landing craft. It also cand be used against ground targets. 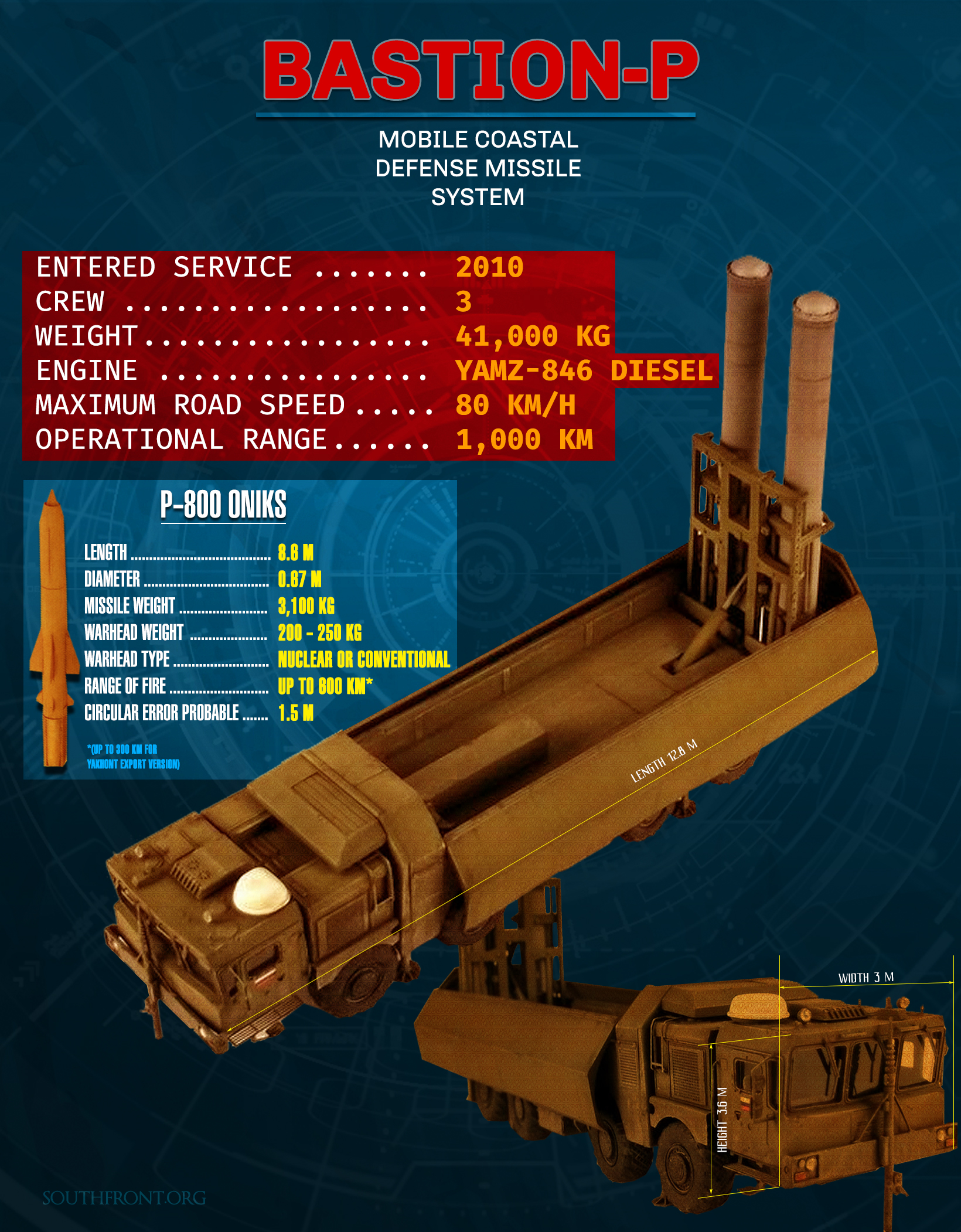 It would be interesting to know some details of what nuclear warhead might be fitted. That is its yield and any other relevant details. I did look at the video of the impacts and to be honest I though it a bit of a waist of a missile. Against a ship it would be different but 250 Kg against a warehouse is not very economic I would have thought.

They are likely testing all of their untried weapon systems Soviet and Russian, in real-world conditions.

Yes I think this is probably the reason.

Command and control vehicles being hit, very accurate and powerful……mach 2.5

Onyx” is equipped with a combined system of targeting (inertial midcourse trajectory and active radar — the final phase of flight.) Flight mission rocket generated from data obtained from an independent source of targeting. Radar homing head, mounted on a rocket, capable of capturing aerial coverage target class “cruiser” at a distance up to 75 km.

After the initial capture of the target is, “Onyx” off their radar and produces a decrease of very low height (about 5.10 meters). As a result, in the middle portion of its flight the missile is below the action of enemy air defenses. Later, after the rocket is due to the radio horizon, the radar turned on again, captures and maintains a target that is induced rocket. At this relatively small portion of the flight supersonic speed, “Onyx” far harder to defeat short-range air defense systems, as well as the possibility of jamming of its seeker.

Overview of the entire affected area with high altitude creates all the conditions for pre-launch target allocation for individual ships and selection of decoys. One of the main advantages of missiles “Onyx” — this is their program targeting, which allows you to operate against a single ship on the principle of “one missile — one ship” and next to “pack” against the order ships. It is in a volley of application fully disclosed all the tactical capabilities of the system “Bastion-P” and its main striking force. Issued missiles capable to allocate and classify targets according to their importance, choose the tactics of attack and an implementation plan.

In the autonomous control system “Onyx” laid not only data on anti-electronic warfare, but also the various methods of evasion of enemy air defenses. After the destruction of the main objectives in the warrant, the remaining rocket attack other ships, eliminating the possibility of an attack on the same target with two missiles. In order to eliminate possible errors in the defeat that is the intended target and the selection of the maneuver, the onboard computer system laid missiles electronic portraits of all existing modern classes of ships. In addition, it contained and tactical information, for example, the type of ships that can rocket decide what to aim for it — an aircraft carrier, amphibious group, the convoy and attack the main target.

Yeah these Soviet/Russian designed missiles are real monsters. Ahead of their time.

Saker posted on the Sea fired Granit Missiles having land attack ability. The Bastion defence system hitting land targets indicates the Russian missile Arsenals are upgraded…we are getting brought up to speed ( pun : ) )… On theatre ability.

NATO is going to kick chairs upon seeing this… Not just some missiles multi theatre and real time targeting, But lots of missiles.

Yeah I really enjoyed that article. There was a related article by Pepe Escobar about calling America’s bluff. Great information.

Yeah, russians do everything BIG…

Did you know we stopped production of the tomahawk and have nothing better to replace it? Whats worse is the tomahawk is a subsonic cruiser, easy for anyone to pick up and shoot down with even rudimentary AA systems nowadays…

I suppose the only advantage the US has is that they can throw a lot of them at one time. Surely this would lead to a volley of P700 Granit missiles taking out every US ship involved.

The E MED appears to be a Russian lake right now! With the RU fleet, S300 & S400 systems deployed, I don’t think the US will launch a cruise missile attack to teach Asad a lesson over Aleppo (Many politicians have put this idea forward). The strike in Syria is not a viable option! If the 6th fleet cant get within range without risk, do all the cruise missiles come from Qatar and Diego Garcia? Turkey will not allow a launch from Ankara airbase against Russia! I think we need to de-esculate from the current situation in Syria. Too many people have lost their lives in a geopolitical conflict with no end end in sight. Let the SAA and its allies establish control instead of murduring chaos.

Just my opinion. Russia knowing it’s military upgrades programs would require time,….to secure Confidence in time management,….enhance intel/surveillance . Doubtfull US military and Nato can logistic move and ready up for strike without Russia knowing…seeing it real-time. Even sending hint messages. …”We see you” : )

US and NATO would understand that an attack would be illegal, And that points of attack from sea or land would be reacted to negate a repeat Action. USN Carrier groups would be countered by several mediums which would leave them Blind,crippled and sinking. Same for land bases. ….probably not running opps from their either. USN/Nato must then use alternative strike locations….these might also Be countered… You go from sudden attack to not even plan C in hours.

Once using USN warships to strike….these assets anywhere in the world could be Marked as hostile after the illegal attack….and countered …Wether they are at sea or in port.

If such insanity did occur,…Russia might hit back unparalleled. ..to press the point home that such dramatic gesture is futile and extremely costly.

My nickname for this is ‘The Dumptruck’ to describe its appearance when the missiles are not deployed. Saw this in the recent large scale exercise in Crimea and the P-800 Oniks kicked ass.