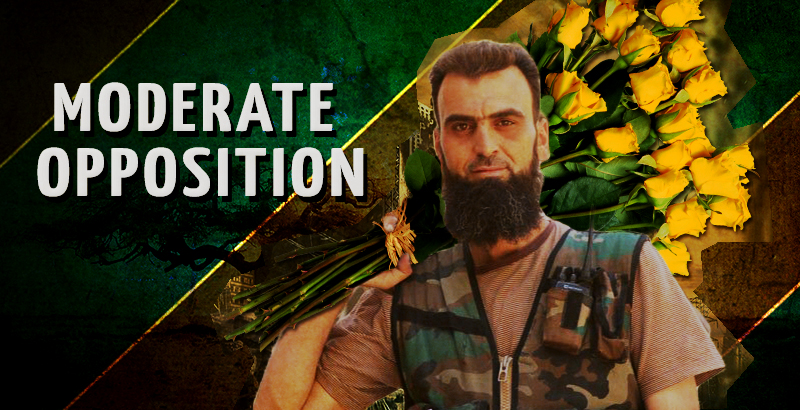 A ‘member of moderate opposition’ according to MSM

Syrian President Bashar al-Assad gave an interview to the Komsomolskaya Pravda newspaper. According to the President, the Syrian conflict really smells like World War III, caused by the fact that some countries are fighting against international terrorism, while others are its sponsors and, in fact, openly support it.

According to Assad, the West, led by the US, continues the Cold War, which was not stopped even after the collapse of the Soviet Union. The Syrian President also said that Riyadh has offered Damascus a deal, one of the conditions of which is Syria’s rejection of contacts with Iran.

“If you want to talk about the regional conflict, Syria has a good relation with Iran, and Saudi Arabia wanted to, let’s say, destroy Iran completely, maybe in the political sense and maybe in the material sense or factual sense, for different reasons. So they wanted Syria to go against Iran, that’s why destroying Syria could affect Iran negatively. That’s how I look at it. The West, for them, Syria and Russia are allies for decades now, and again, if we undermine the position of Syria, we can influence the Russians negatively,” al-Assad said. “After the war, the offer was directly from the Saudis. If you move away from Iran and you announce that you disconnect all kinds of relations with Iran, we’re going to help you. Very simple and very straight to the point,” he added.

Al-Assad also responded to questions about the role of Turkey in the ongoing Syrian conflict. According to the head of the Syrian Arab Republic (SAR), Turkey carries out a full-scale invasion of Syrian territory, “capturing” pieces of the Syrian lands. Al-Assad said that Turkey’s statements about fighting against the Islamic State (ISIS) terrorist group look ridiculous.

“They made ISIS, they supported ISIS, they give them all the logistical support and they allow them to sell our oil through their borders, through their territory, with the participation of Erdogan’s son and his coterie; they all, all of them, were involved in the relation with ISIS. All the world knows this. But with this invasion, they wanted to change the package of ISIS, to talk about new moderate forces, which have the same grassroots of ISIS. They move it from ISIS,” Assad said.

According to the Syrian President, the ISIS is also virtually supported by Israel. The Islamic State actually operates at the borders of Israel, but the country is not threatened just because Israeli authorities support both the ISIS and the Jabhat Fateh al-Sham (previously known as the Al-Nusra Front or the Jabhat al-Nusra).

“Not only ISIS, of course, or Daesh, not only al-Nusra; anyone, any terrorist who holds a machinegun and started killing and destroying in Syria was supported by Israel, either indirectly through the logistical support on the frontier, or sometimes by direct intervention by Israel against Syria in different areas in Syria,” Al-Assad said.

Speaking about Russia’s role in the operation in Syria, the president noted that Russia has changed the balance of power in the country not in favor of terrorists.

“In brief, before that intervention, although there was this American alliance, so called “alliance” which is for me an elusive alliance, they did nothing, ISIS was expanding, ISIS and al- Nusra were expanding, they used to have more recruits, more recruitments. They used to have more oil to export through Turkey, and so on. After the Russian intervention, the same land under the control of the terrorists was shrinking,” the president said. “We trust their politics, politics based on morals before interests. We trust them because we know that they wanted to support us because they wanted to get rid of the terrorists, not because they want to ask us anything in return, and they never did. Till this moment, they never asked us for anything in return. All these factors encouraged me and the Syrian government and the institutions to ask for the Russian help,” he added.

Assad has been saying this for years and years.

interviewer was somewhat critical at times. in any case i wish some reporter would ask assad about the white helmets. im sure he knows what they really are, and have wondered why he hasnt had them rounded up yet.

Assad gave a good show for himself , one point he might have made and stressed , is that Syria and Russia are long term allies , how can anyone be surprised that Russia would come to the aid of Syria. Also liked his suggestion that Turkey and its FSA is just a name change. ISIS becomes FSA .

good interview. it contains, assad on turkey, reason of shortage of men power in saa etc etc. many interesting things you should take a watch