Forces loyal to the Kurdistan Region’s President Massoud Barzani are on retreat in mutliple areas as the Iraqi Army, the Federal Police and the Popular Mobilization Units (PMU) push to restore the federal government’s control over contested areas in northern Iraq.

Following the operation in Kirkuk city, Iraqi government forces have taken control of the towns of Sinjar, Bashiqa, Makhmour, Khanaqin. In all these areas, the army was cooperating with local PMU members. For example, the Yazidi-populated town of Sinjar was taken back by the government with help of local Yazidi PMU fighters.

According to Iraqi forces, the army and its allies are now developing momentum towards the town of Rabia located at the Syrian-Iraqi order. The control over the Rabia is not clear now, but the Peshmerga is reportedly withdrawing from the area.

UPDATE: Rabia and the Iraqi-Syrian borderrossing near Rabia are under the control of Iraqi government forces.

A major part of the gains were made by government forces wtihout any shot because Kurdish Peshmerga units had abandoned their positions.

Separately government forces have taken back Hassan Bey and Afana oil fields that had been attacked by ISIS last night. 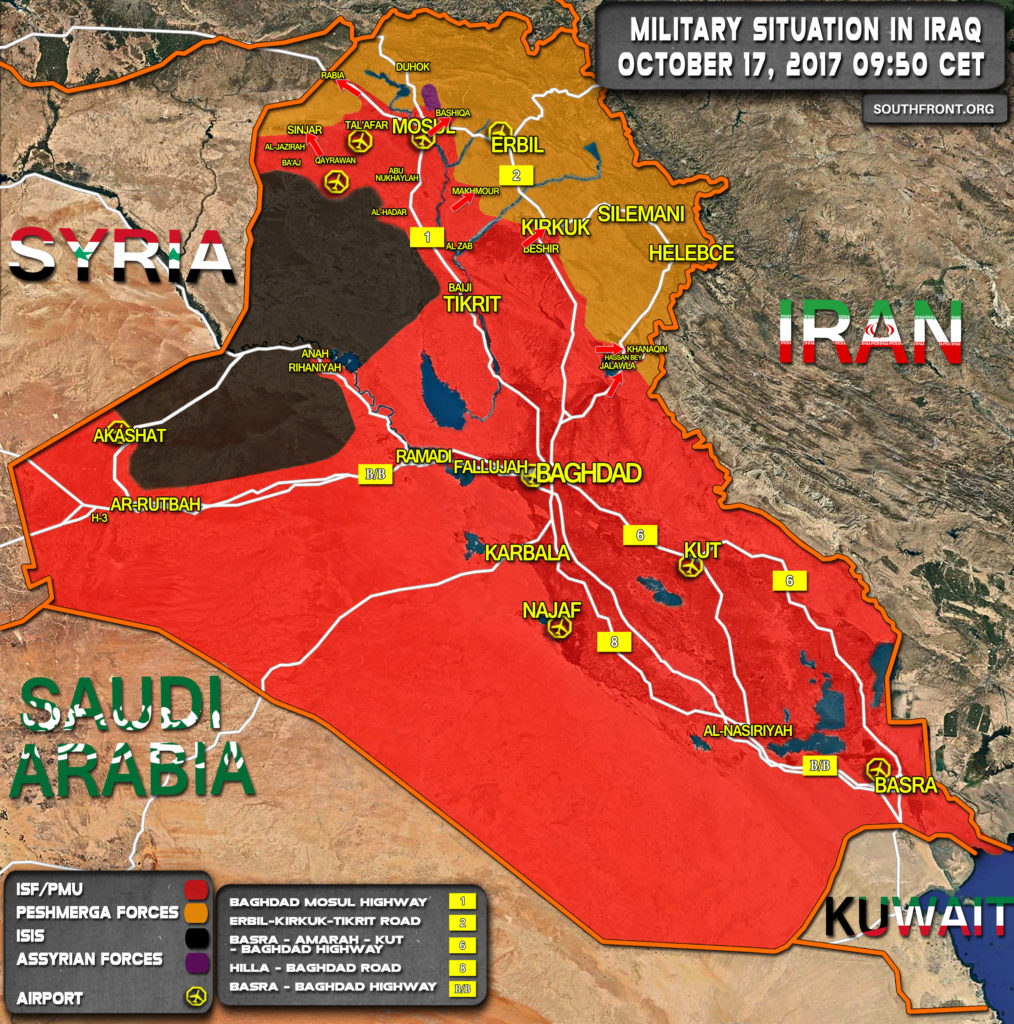 Kurds better sit down and ask Barzani about all his destructive talks and actions. He and his clan hurt Kurds more than any other “imaginary” foreign or sectarian government. RIP Talebani. As long as he was around, we didn’t see such idiotic behaviour.

With this rate soon KRG will return to pre June 2014 borders . About this situation in few words – Americans threw them under the bus . The land grabbing of KRG that they did for 2 years will end literally for few days

Iraqi government will get full control over Iraq again and will reach to the whole border with Iran, Turkey and Syria.

Wait within days Trump blamed Iran for all of these. On Twitter…

Actually the kurds get what they deserve. It is up to themselves to get rid of the jew-greedy Barzani clan.

Amin is a Persian

Personally, I did not expect it. At least, not at this speed.

If they take Rabia and then push north onwards towards Turkish border does that mean that the SDF would then be basically isolated from any means of resupply, without the consent of the Iraqi government, so basically Iran?

If I were the SDF I would really start to reappraise what I’m doing, the actions I would take against Assad, because the strategic situation is now changing with every hour. Also my fellow Kurds in Iraq have now just been thrown under the bus by the very ally I sold my soul too.

Such a fast moves are unpredictable absolutely. Look like a result of some ‘under wraps’ agreement…

Then I reckon the smart thing to do for the SDF is to stop taking further Syrian land and oilfields, before things really get out of hand. And reappraise how solid their relation with the US is, before said things get really out of hands. Because you don’t want to be the first guy to get out of the trench into a hail of bullets only to notice that nobody else is following.

Nice, well when the Peshmerga is not backed up from western states same and the SDF in Syria they cannot do shit. From always everything it’s been given to them on hand like political support and financial support, military support then only then they can do what the west will tell them to do and they will do it, they are just proxy for the US-Israeli wars. Believe that they are nothing they are pure gypsies. Now no one is backing them up for Kirkuk from the Zionists westerns politically and military and they can’t do shit about it, the US is on Iraq’s side, that’s why there is no help for them now in this situation because I will said it again they are proxy pions for the US wars where is needed that’s it nothing more. And they can cry like little girls on middle of the streets, grown man cry like children for place that was never theirs,for place that they occupied in mid of nasty terror war from the Iraqis, they had it for 2-3 years and they just thought that after Daesh Iraq will not come for it. You cannot stand up for something that’s not yours. So stop bragging about it, take it like a real man, you stupid Kurds, don’t you still didn’t realized how the US work are you blind. Well for blind people light is not needed.!

Even the candle is not needed for those blind land grabbers.

Just like uck albanians now in se europe.always mafia and white slavers in germany ,franc etc , everyone knew it but because of uISISa they are now ZioNato darlings.remember they were first ISIS with europe after turcobosnians!

+ Drugs, alcohol, weapons and even refrigerators and air conditioning!

Funny you say that .i hear iran is having a growing heroin problem. When uk could not stop drain of silver pounds to china in 1840s it sent opium to addict the chinese…which it did starting the opium wars. Sassoon jewish family and ex camerons pm if uk family all involved in that.

good maybe suleimani move was behind the event

Kurds must abolish this Kurdishtan thing it create tribalism and disunity.Be like Arabs there is no Arabistan.Kurds please understand USA plans to control Saudi oil,Libyan oil,Iraqi oil,Iranian oil,Syrian oil and gas,Caucasian oil and gas,Qatar’s oilfields and gas pipeline has failed. Tricks of regime change has been exposed by whole world.USA/NATO declaring them self as global community has also be exposed. Instigators and terrorist creator’s has also been exposed.Learn from Taliban,Al-Qaida, Al Nustra,ISIS,FSA,Friends of Libya mistakes by following USA/NATO.Georgia and Ukraine were being to shame and self destruction by USA lies.Learn to love your neighbour.

Yeah the moment I was shown an image of this, uh….. Kurdish whatever, with the uber scumbag of the century, Bernhard Levy, one of the architects behind the Libyan slaughterhouse, and others to the Malians coup, I knew we have been spot on, and my only recommendation to the stupid Kurds, is to hang that bastard from the nearest possible lamp post.

If not, well, I am glad I am not you, because, apart from some few country’s, like the NorDicks (fake joos aka khazars), and uISISa/ISISrael, you have no sympathy, no rights to Kirkuk more than I have, aka nada.

Wherever this scumbag -Levy- goes, chaos and death follows him.