Militant groups operating in the Syrian province of Idlib are actively preparing media infrastructure to carry out a propaganda campaign against the Damascus government and inject fake news fueling the MSM narrative about the “bloody Assad regime”.

While there is little new in this effort, an interesting thing is that Idlib militants appear to be determined to repeat the “little girl blogger” story, which was already used in 2016, during the final phase of the battle for Aleppo city, a part of which was occupied by militant groups.

Then, pro-militant propagandists were using account @AlabedBana [created on September 24, 2016] as an important part of their campaign against the Syrian government and in support of Jabhat Fatah al-Sham (now Hayat Tahrir al-Sham, formerly Jabhat al-Nusra – the Syrian branch of al-Qaeda), Nour al-Din al-Zinki (became widely known after filming and posting a boy beheading video) and other “moderate opposition” groups.

The account, which was allegeldy belonging to a 7-yo girl, Bana al-Abed, was used the #HolocaustAleppo, #MassacreInAleppo, #StopAleppoMassacre hashtags and called on the international community to stop the “Assad regime” from killing peaceful people – i.e. members of the aforementioned terrorist groups.

My name is Bana, I’m 7 years old. I am talking to the world now live from East #Aleppo. This is my last moment to either live or die. – Bana

Initially, the account was pretending that all tweets were written by Bana al-Abed. However, later, after it became clear that the girl hardly spoke English and all videos with her were strongly scripted in that period of her life, the official version changed to that her account was “managed” by her “mom”.

During the entire battle for Aleppo and after it, the MSM was actively exploiting the “little girl blogger under bombs” narrative to slam the ani-terrorist campaign of the Syrian-Iranian-Russian alliance. According to experts and existing data, the “Bana narrative” was a part of the large-scale propaganda campaign coordinated by special services of the US-led bloc to prevent the Syrian Arab Army (SAA) and its allies from liberating the city of Aleppo.

Her “memoir”, with a hard-core pro-militant look at the developments in Aleppo, was published in a book titled Dear World in 2017.

My book Dear World will be published on 3rd October. ❤❤❤ to everybody. #dearworldbook . pic.twitter.com/K38YXNkxHI

In 2017, the history seems to repeat itself in the province of Idlib, a part of which is still in the hands of Hayat Tahrir al-Sham and its allies. In July [considering the first post, on July 28], an account of another little girl blogger appeared in Twitter. This time the account is allegedly belonging to 6-yo “Hala” from the city of Idlib [controlled by Hayat Tahrir al-Sham]. 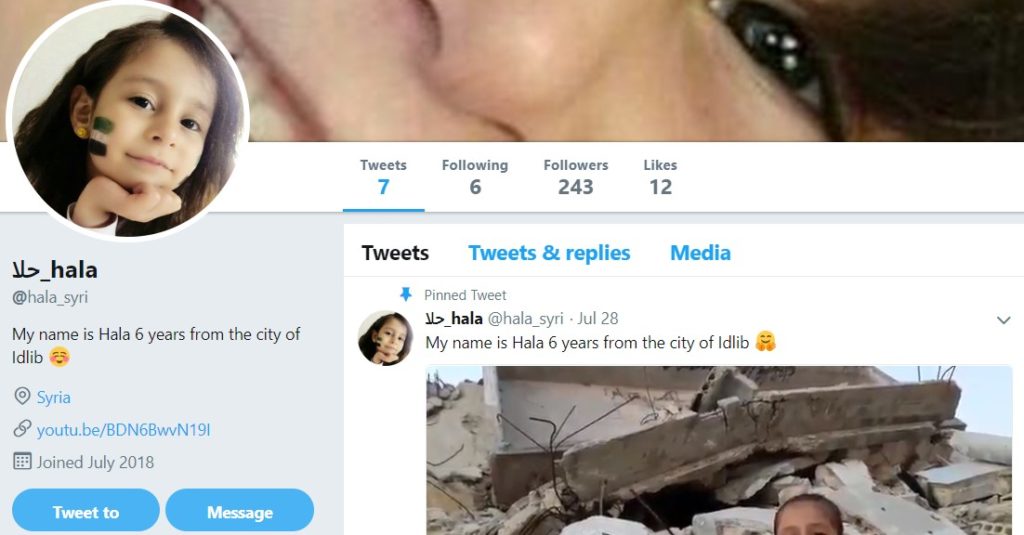 The account has already posted a few tweets using the #EyesOnIdlib hashtag. It’s intersting to note that the account was created amid reports about ongoing preparations by the SAA and its allies to deliver a final blow to terrorist groups operating in the militant-held parts of the provinces of Idlib and Latakia.

The account was created ahead of military developments that could take place soon to pretend that this was not a part of the propaganda machine, but a merely “local initiative”.

My name is Hala 6 years from the city of Idlib ? pic.twitter.com/6vxyF4Z2El 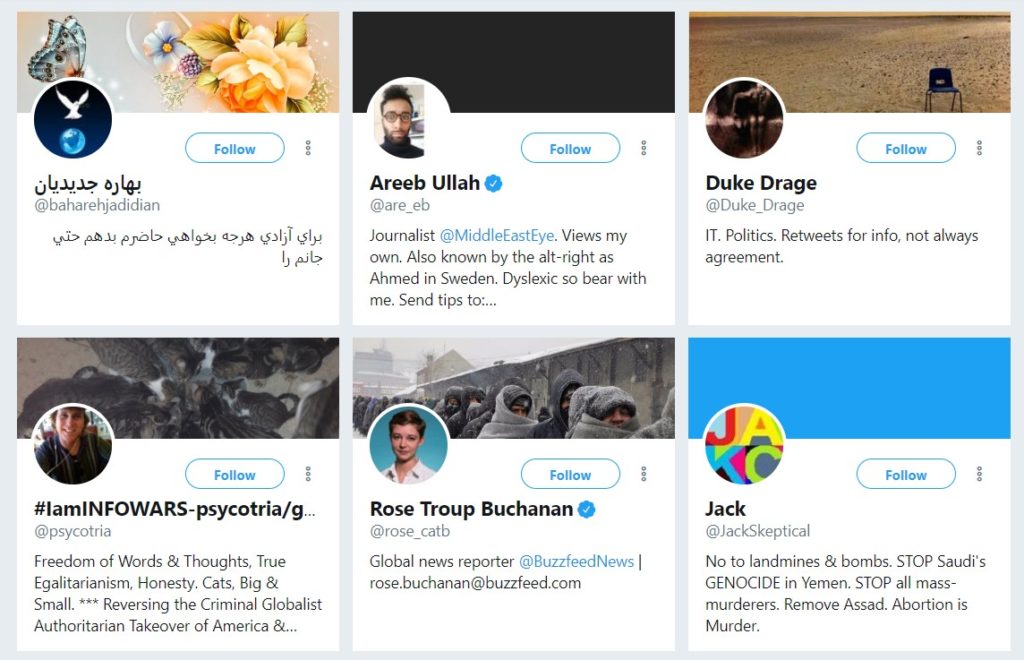 When (If) the SAA starts its military operation to defeat Hayat Tahrir al-Sham and other militant groups in Idlib, this account will likely become another tool used by pro-militant propagandists in their media war against the Syrian-Iranian-Russian alliance.

The cases of Bana and Hala show how the MSM is ready exploit children for propaganda purposes and to gain additional viwership. At the same time, these children are just victims of journalists and parents that are making money and pursuing own goals exploting them.

Nukes needed on Riyadh and Najd. Then repeat the dose twice daily, & see me next week..

Satanic Saudis are originally Jews. Since the time of Khyber their hearts are full of hatred for Islam.

History repeats itself. The uncompleted siffeen has now comprehensively completed in Syria and Iraq. Now world must hate these warmongering house of satanic Sauds. They r the actual killers of peace.

There is nothing noble in the Qur’an, it’s based on hatred against all “disbelievers”, it repeatedly tells you to fight in the name of Allah to bring the whole world under Islamic hegemony. I’m an EX-Muslim, so you’d better not try to argue with me on Islam.

I’m most definitely an EX-Muslim and there are millions of EX0Muslims like me. You must be having a heart attack every time you come across us…….

Hardly. As we say in Iran, “Jesus to his religion, Moses to his”. Not everybody born into a religion is a follower of the said religion. Being an “ex-something” means that you were a practicing and devout “something” by choice, but later based on gathering information and conscious arguments voluntarily decided to stop being it.

Would you be kind enough to tell us which part of Qur’an asks us to “fight to bring the whole world under Islamic hegemony”? I admit I don’t know much as I read the whole Qur’an only a couple of times. You seem to have a good knowledge about it so it should be easy for you.

Better look at the Russian war propaganda, oh wait you spread one and pretend that its from various “independant” free thinking individuals working day and night to get some money from donations while your donor sits in kremlin and pays well.

Ahh, Twitter and the saga of Banana-Al-Jihad. Meanwhile those who have pro-Syrian or pro-Iranian Twitter accounts are increasingly being suspended or disappearing completely – ie Ivan Sidorenko, Plutonium General etc. US based social media platforms are no longer free enterprise projects (if they arguably ever were) but are now clearly an extension of state corporatism. As is old fashioned state corporatism – fascism.

To all due respect to Anna Frank, these are all Sotonistic tryouts to copy paste that, and subconsciously conect Syrian government to evil Nazi regime and blame it to Syrian so called ‘regime’.

Time to add this to Twitter accounts to monitor any propaganda

does anybody know how many hospitals, kindergartens and kitten shelters are there in Idlib as of today, so we can keep count of how many times over they get destroyed by barrel bombs of the evil Assad regime? just for future reference…

Those Western Wahhabi-Headchoppers are the Kid-Killers… thanks to their IDF-NATO-IsraHell-U.S.-NATO-Training & Support….They are Nothing!!! Watch Out West! Men with Pitchforks are just around the Corner… it will become a BLOODY MESS! KIDKILLERS WILL DIE!!!

There is a non-zero chance that this will backfire. Even in the U.S. with the most gullible people on earth there have been backlashes.

We go along with it and one day everyone starts rolling their eyes, case and point, just about everyone has had it with naming laws after victims, ‘amelia’s law’ or ‘stacey’s law’ (intentionally choosing off names, I’m not a total jerk). Chances are the CIA goons and their Idlib proteges will get away with it, but maybe, just maybe it will backfire.