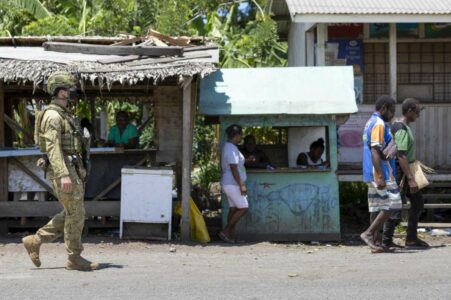 The history of humanitarian or policing missions is a history of taking sides, disruptive partiality and the forfeiture of the very object powers claim when intervening in another country.  Things become particularly absurd when the individual or government pleading for such help to an outside force is struggling to survive yet making grand statements about democracy and the like.

Take Prime Minister Manasseh Sogavare of the Solomon Islands, who has made full use of the security agreement with Australia, signed in 2017 to make future meddling in his country a smooth affair.  That understanding had been reached after fourteen years, when Australian-led forces found themselves involved in the Regional Assistance Mission to the Solomon Islands (RAMSI).  “We know that a failed state in our region, on our doorstep,” Prime Minister John Howard stated in July 2003 with forced justification, “will jeopardise our own security.”

Since 2017, the Solomon Islands has continued to sunder under the stresses of poverty, uneven development, corruption and tensions between the capital and the provinces.  The ditching of the longstanding relationship with Taiwan by the Sogavare government in 2019 became, in effect, a matter of contention between the main government and the Malaitan administration of Premier Daniel Suidani.  Emboldened, companies and entities linked to the Chinese Communist Party began to exert their influence.

Malaita’s niggling and harrying premier, unpersuaded by Honaria’s pro-Beijing drive to foster development, initiated its own measures in the province.  The 2019 Auki Communique notes how the Malaita Provincial Government (MPG) “strongly resolves to put in place a Moratorium on Business licenses to new investors connected directly or indirectly with the Chinese Community Party.”

The document also has a religious barb directed against the CCP, acknowledging “the freedom of religion as a fundamental right” and the “Christian faith and belief in god by Malaitan and MOIan [Malaita Outer Islands] peoples” which was in opposition to the “CCP and its formal systems based on atheistic ideology.”

In May last year, Suidani was unsettled by the central government’s insistence that the China Civil Engineering Corporation (CECC) conduct a feasibility study on Malaita North East Road from Fouia to Manu.  “We are strongly opposed to PRC communist ideology and investment,” the Premier objected in a statement.

To ensure that his motivations were given a full, dramatic flourish, Suidani, when he fell ill that same year, parried away suggestions from the central authorities that he accept medical aid from China.  Taiwan, instead, took him in, leading the Chinese embassy in the Solomon Islands to issue a curt statement.  “China firmly opposes any official contacts in any form between Taiwan and any officials from countries having diplomatic relations with the People’s Republic of China.”

The Suidani government has also accepted development aid from the United States, the latter opportunistically furnishing the Malaitan administration with the sum of US$25 million in October 2020.   All this time, the Premier has maintained warm relations with Taiwan, a move which has been reciprocated, showing a country very much divided against itself.

In October, a motion of no confidence was presented to the Premier in the Malaita legislature, said to have been the brainchild of the central government in Honiara.  Protesters gathered and marched through the provincial capital of Auki to seek its withdrawal.  Sogavare’s backers relented.

The snatches of commentary from The Solomon Times may well be unreliable, but the sentiment of the protests was unequivocal enough.   Outside the Assembly Hall, the marchers spoke of how, “This is a government of the people, so if the central government cannot listen then we have to stand up and talk.”  Suidani, punch drunk with an almost authoritarian air of confidence, declared that, “There is no such thing as an Opposition group, the MARA government is the executive and non-executive.”

It is precisely this patchwork of tensions and confusions Australian forces find themselves shoring up.  Simplistically, Australian Prime Minister Scott Morrison hopes that local flavour, allegiances, and factions can be ignored with judicial care.  “Australia’s response,” he reasons, “is under the treaty that we have with the Solomon Islands and that is with the people of the Solomon Islands – that is between two governments, and that is there regardless of who is running either of those governments.”

Inconsistently, and incredulously, he also stated that Australia sought to “take no part in the internal issues of the Solomon Islands but simply to ensure that any issues can be addressed in a calm and peaceful way.”

The moment those forces and personnel were deployed, Australia became a standard bearer for the status quo and defender of Sogavare.  Celsus Talifilu, an advisor to Suidani, asks a pressing question on that very issue.  The presence of the Australians “on the ground gives a very strong moral boost to Prime Minister Sogavare and his government.  They are here at the invitation of Sogavare – how can you be neutral?”  Only the Malaitans, suggested Talifilu, were the ones defending democracy. “We were thinking Australia would see the stand we are taking.”

Australian police and soldiers now find themselves in Honiara ostensibly to restore order.  Papua New Guinea has sent a small contingent, and Fiji is also promising a number.  The broader aim is to shore up a regime that is deservedly doomed and risks dying of natural, democratically induced causes.  Prior to the intervention, it was even reported that police were having discussions with Sogavare about his possible resignation. Now, the regime is digging in, warning of “another evil plan” by anti-government protestors to devastate the capital.

Unnaturally, Canberra is doing all it can to assure that the regime is placed on Australian life support, suppressing the local resistance movement that could topple it.  And all this has been done while Honiara maintains relations with the PRC.  The Prime Minister of the Solomons has every reason to feel smug.

Does anyone see the irony of Australia being part of AUKUS to combat China is shoring up a government that has swapped supporting Taiwan to supporting China while the US is supporting the group who make up the rioters. It is a convoluted world in which we live.

Things are not as they seem.

Oz is controlled by China. The Solomon Islander people need to rise up and kill all the Ozzie soldiers.