The European Parliament (EP) has adopted a resolution calling for tougher sanctions from the European Union (EU) against Russia, should the situation in the Azov Sea continue to deteriorate. The document states that the Kerch bridge was built illegally, therefore the EP welcomes the council’s decision to impose restrictive measures against the companies involved in its construction. It suggests the creation of the position of special envoy on Crimea and the Donbass region in order to monitor the development of events there. And it warns about wider security implications that directly affect the EU. It demands that Russia “immediately end the intensive and discriminatory inspections of vessels and to consider, if necessary, appropriate countermeasures.” Previously, Adm. Igor Voronchenko, the commander of the Ukrainian navy, threatened to use force against Russia as his service brought more ships to the area. Ukraine’s government announced last month that it would build a naval base there.

The EU has condemned Russia for launching a new inspection regime for cargo vessels coming from or heading toward Ukrainian ports in the Azov Sea. It is also accused of militarizing the sea by increasing the number of its ships deployed there.

On Oct. 3, NATO Secretary General Jens Stoltenberg expressed concern over the situation in the Azov Sea at a press conference in Brussels. Last month, US State Department Special Representative for Ukraine Kurt Volker stated that Washington is uneasy about the situation developing in the Sea of Azov, and is thus prepared to continue supplying Ukraine with weapons.

NATO and Ukraine held a major NATO operation Oct.10-19, dubbed Clear Sky, with substantial US Air Force participation. Just a few days ago, it was reported that the US government was considering the transfer of Oliver Hazard Perry-type frigates to Ukraine. This move will really boost that country’s sea power. Ukraine has only one seagoing warship — the frigate Hetman Sahaidachnyi. Since it is almost constantly out for repairs, it goes to sea rarely and only for very short deployments, such as NATO drills, never moving far from its home waters.

The delivery of relatively contemporary frigates with sophisticated weapons systems and equipment is a huge leap forward for the Ukrainian navy. The vessels are too large for the Azov Sea but they could operate around the entrance to it. Of course, the ships will be a factor to reckon with in the Black Sea. Ten ships of that class are available for export. They can be transferred under the Defense Department’s Excess Defense Articles program, which allows the release of surplus weaponry to friendly nations. In September, the US Coast Guard transferred two Island-class cutters, armed with .50-caliber machine guns and 25mm deck guns. The US is taking one step after another to push Kiev toward confrontation. Just as the election campaign in Ukraine is swinging into full gear, Kiev is being urged to challenge Russia militarily.

NATO naval operations are restricted by the 1936 Montreux Convention. Black Sea members don’t have many surface ships, and non-Black Sea allies are to rotate their ships every 21 days. This is a problem that can be solved with a little sleight of hand, such as by reflagging warships so that they fly Ukraine’s ensign. That’s how the American Oliver H. Perry frigates could be based in the Black Sea permanently. Any international agreement has a loophole. Russian military experts are old hands at this. They know perfectly well that the frigates will operate under US control.

That’s not all. Another way to skirt the provisions of the Monteux Convention is to sign a port concession agreement with a Black Sea country. This will trigger legal procedures based in the law of the sea, giving the US the opportunity to have some clauses reviewed regarding its naval operations. Ukraine comes in handy. The US military has its eye on the Ukrainian seaports of Odessa, Ilyichevsk, Chernomorsk, and Yuzhny. It already uses the Ochakov facility in Ukraine. Now that the construction work is over, US ships could drop anchor there. The convention does not allow aircraft carriers to enter the Black Sea, but Ukraine could be transformed into an unsinkable flattop.

The EU resolution sounds really tough. Why such a strong reaction and why now? Because Russian Foreign Minister Sergey Lavrov frustrated NATO’s plans to hold a provocative military exercise in the Azov Sea. Because of a bilateral treaty signed by Kiev and Moscow, Ukraine won’t be able to host the planned training event in the Sea of Azov without Russia’s consent.

Ukraine’s government is whipping up tensions because President Petro Poroshenko is running for reelection in March 2019 on a national security platform. This is pushing him to take a tougher line on Azov. In late March, Ukrainian border guards stopped the Russian-flagged, Crimean-registered fishing vessel Nord and illegally detained its crew. Ukraine was violating a number of international agreements. The incident triggered a campaign of provocative actions. In August, the Russian tanker Mekhanik Pogodin was detained in the Ukrainian port of Kherson. At the time, the Russian government compared that move to the activities of the Somali pirates.

Whatever Russia does is done legally. If there is a problem, Russia and Ukraine can solve it through negotiations. But neither the EU nor NATO has the idea of acting as a mediator to promote that process on its agenda. They could easily press Kiev into talks with Moscow but have not. Instead the EU votes for this provocative resolution, NATO expresses its political support, and the US sends warships and weapons. They are doing everything to goad Kiev into taking a confrontational approach and turning the Azov Sea into a flashpoint with a showdown expected at any minute.

If I were Washington, which I am not, I would bring in 3 US Air-Carrier brigades in the Azov Sea in a show of force and thus negotiate our rigths to Crimea out from a position of strength.

Because Putin only sees emphatic diplomatic talks and helpfull American hands as a weakness. Sadly enough we must admit Putin and Russia only understand brute force.

Three of these to show we mean business. 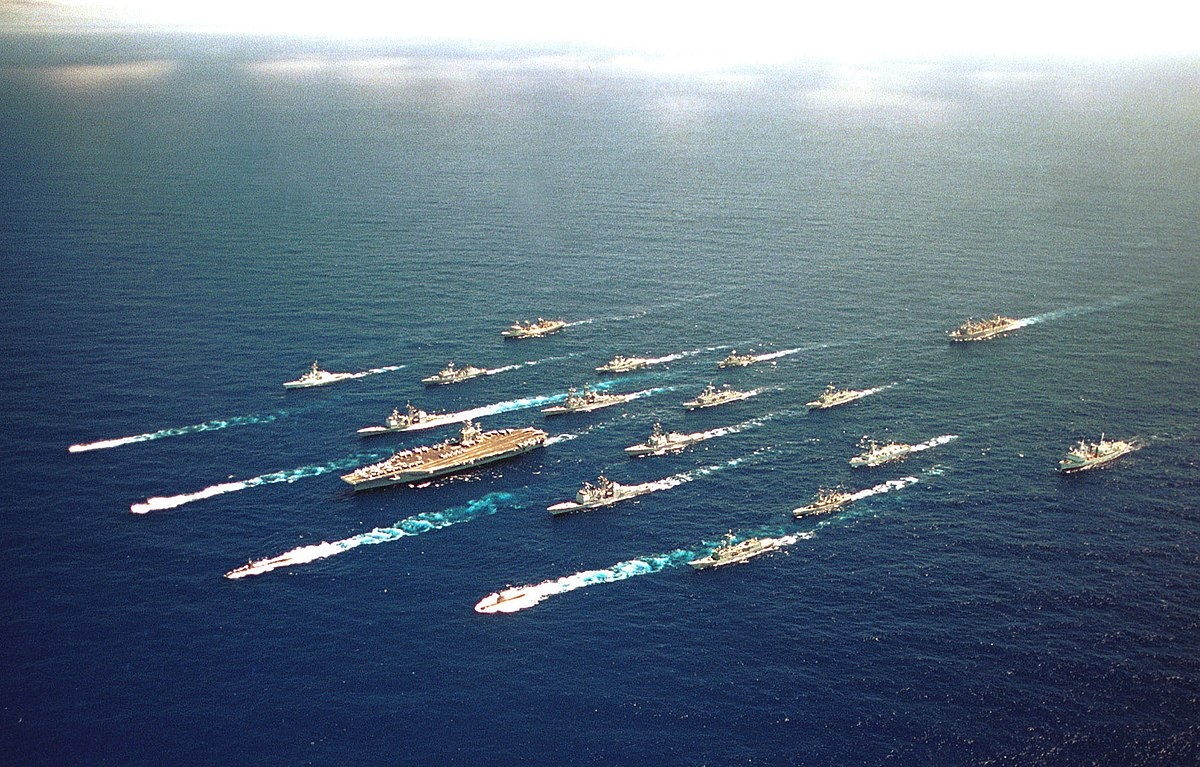 If you where at the helms in Washington, the world would already be in WW3.

Just a shot of Kinzhal missiles to wipe them away in 20 seconds.

Gee, this is how the US Evil Empire will meet its end, just like the Nazis in WW2. This time, every human on the planet could pay the price.
At least I would die free, and not an imperial slave.
Did you hear what Putin said about the Russian people becoming martyrs, while those of the aggressor nations go to hell?
Do you believe in hell, Tommy boy?
As a Hindu, I have reincarnation awaiting me in over a thousand inhabited worlds in this galaxy alone.

You will not die free. We will get you in the end and you will also bow!
Sure, but words are just words. If we regret 1 hour before we die, we can go to heaven as the robber on the cross.

For many years I didnt knew how to handle the expression hell, but after studying the bible I realised Hell is here where we are right now, on the lowest level.

No, you are just a retarded, pathetic imbecile, an useful idiot, a dumb, indoctrinated, slave who likes to repeat moronic mainstream mantras like a good indoctrinated bitch. Brute force is what your criminal, tyrannical evil empire does, illegal aggressions and countless genocides – that’s what United Satanic Assholes are. The most evil abomination in human history, including all you mutants who support them.
but unlike most of their victims, Russia can (and should) send you all to hell, instantly. So you can lick Mccain’s anus there….

Not good ecologically. There would be lot of spilled oil and dead birds when those are sunk.

NATO salivated at the thought of occupying Crimea after it’s members, primarily the US, overthrew the government of Ukraine. Unfortunately for them, they still don’t realize that the Russian people (majority) whose homes have always been there, are of the same caliber that defeated the Nazis at Staligrad and no doubt will defeat any aggressor that would attempt to evict them from their homes. The best thing for the EU to do is to toss off it’s vassal status and join the rest of the world which wants to trade, get along and not have their countries destroyed by war.

I would have just left it as “The best thing for the EU to do is to toss off”…… British humour.

RUS should use the israeli methof of targeted preemptive
killing of all that assholes in Kiev. after the first dozen of pigs are gone, there will be silence

NATO gangsters are itching for a confrontation in the Azov Sea. Is RF ready for this? And when will the RF counter statements be made loud and clear to these EU slaves and the NATO gangsters. Perhaps, only the first NATO body bags will get the message through the thick skulls of the US Evil Empire gangsters?