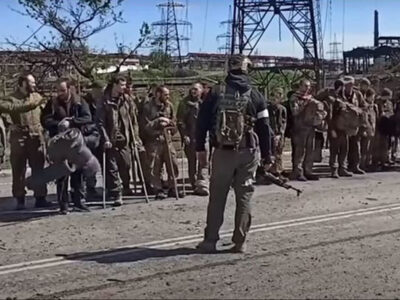 On May 25th, the official representative of the Russian Foreign Ministry, Maria Zakharova, commented on the possibility of a tribunal over Ukrainian neo-Nazis.

At a briefing, Maria Zakharova confirmed that all Ukrainian militants from Azovstal who committed war crimes will be punished.

“As for responsibility, then, of course, all those who committed war crimes will be punished as they deserve,” Maria Zakharova said.

According to the representative of the Russian Foreign Ministry, the tribunal is planned to take place on the territory of the DPR.

She added that the leadership of the Donetsk People’s Republic plans to create an international tribunal on the territory of the republic for the trial of nationalists from Azovstal. Russian Deputy Foreign Minister Andrei Rudenko claimed earlier that it wass unknown whether representatives of other countries will take part in the tribunal.

Earlier, the head of the DPR stated that the main task is for the tribunal to be transparent and to be held with maximum publicity, “so that as many people as possible learn about those crimes of neo—Nazis, which in principle are unacceptable.” One of the first stages of the tribunal may take place in Mariupol. The DPR Prosecutor General’s Office is currently preparing the necessary documents together with Russian relevant departments.

The death penalty still legally exists in the DPR. In August 2014, the Criminal Code of the Ukrainian USSR of the 1961 was adopted in the Republic. Article 58 provides the death penalty for particularly serious crimes. Execution may not be applied to minors, persons who have reached 65 years of age at the time of sentencing, as well as women. The death penalty may be replaced by life imprisonment or imprisonment for up to 25 years.

Lol the Donetsk Peoples Republic has the death penalty, these nazis are fucked!

Off topic, but today 22 years ago Hezbollah liberated south Lebanon from Israel giving them their first defeat. This was before Hezbollah had the advanced weapons and allies they have today. Unfortunately we don’t have the same the leaders we have today that helped us start Hezbollah and were there to help with conducting successful operations.

Sayed Mustafa BadrIddine (was the master mind behind against some of the best military operations against the IDF, especially the martyr operations)

I don’t want to spam the comments, but these are just a few. Rest peace guys

Hezbollah are a legend.

I love the smell of burning Yarmulkes in the morning :)

TRUTH IS THE CRUSHING SOROS DEFEAT

Can’t wait for the show.

Hopefully any foreign fighters are treated like the illegal combatants that they are also.

It is disaster, which is coming to other countries, because Washington regime tries to brainwash everyone. They are banning the Russian community (public organiztion of rus. compatriots) in the US, but “Church of satan” and Fascist party of the US is acceptable.

I hope the DPR remains independent until they can try and execute all the Azov war criminals before they become part of Russia which doesn’t have a death penalty at all, just a 7 years spa vacation in a Siberian murderer’s prison.

It’s a good thing that Ukrainian”s arent taking prisoners. Just headshot the dirty russian invader orcs and be done with it!

Denazification, not just a catchy title
Reply to  Boggs

OK, Hoggs. Whatever you say. Nothing else expected from a nation of pigs.

Last edited 2 months ago by Denazification, not just a catchy title
13
Reply

Vlad the Impaler
Reply to  Boggs

Ukrainian hookers are cheap in Romania, but they can’t find work because nobody wants to fuck a subhuman. They’re also into degenerate shit like golden showers (and literal shit), which Romanians find disgusting, so now those hookers have to appeal to the EU for welfare otherwise they starve, lol.

I’m sure they are being tried in the DPR specifically beacuse they still have the death penalty. I think there is going to be a world shortage on rope soon.

The crime scene was in DPR, that’s why they should be prosecuted here. Mariupol’ was occupied city of DPR, so the Donbass group of ukros is under LDPR’s laws I guess. By the way, death penalty still exists in Russia too, but there is the moratorium, because Russia was a member of the European council on human rights. Russia is out, so the moratorium can be cancelled.

There should always be a death penalty for crimes of such a serious nature that there will be a very real risk for future innocent victims. Those in secure prisons can escape and should we even have permanent incarceration because people are too dangerous to INNOCENT humans otherwise?

Plus, resources should not be spent on upkeep of those monsters even if their incarceration would be grim. That money should be spent on the surviving victims of their evil crimes. I wouldn’t normally call for death, but those who think they have the right to deem other human beings as sub-human are monsters that need to go. It’s the only way for the human race as a whole to move on and make true progress. They are fully aware of what they have done. No point in educating them, they need a good old fashioned ‘schooling’. Thanks to Russia, saving the world from Nazis yet again.

the 2014 murders by the UA on Ukrainian citizens in mariupol captured on film are on youtube for now. I believe they will shortly disappear. they clearly show azov and UA shooting civilians protes6ing the forced militarization of mariupol, other show the UA running civilians over in BDR’s. the wests lies will not be able to cover the sound of discord from mariupol when the truth comes to print

Russian news media should show the capitulation and surrender of the azovNazis in Mariupol to encourage the remaining ukki army to lay down their arms to stop further bloodshed,