On October 15th, the Armenian Ministry of Defense released an updated statement on alleged Azerbaijani casualties.

Since the last update, which happened on October 14th, the new losses of Azerbaijani army are – 4 UAVs, 5 armored vehicles, 1 plane, 350 casualties. The Karabakh defense army has published another list with the names of soldiers who fell in the defense of the Motherland. The list consists of 49 people.

The total number of losses of the Armenian side is 604.

Another Su-25 belonging to the Azerbaijani Armed Forces was also reportedly downed.

Turkish F-16s were also allegedly delivered to Azerbaijan through Georgia.

On October 16th, after about an hour of intense shelling, the opponent launched a large-scale offensive in the Northern direction. They tried several times to take our positions by attacking waves, but thanks to the courage and skill of the Armenian soldiers, the opponent was repulsed with significant losses, Armenian Ministry of Defense spokesperson Artsrun Hovhannisyan said.

We remind that Georgia officially declares that it prohibits military flights through its airspace for both sides of the conflict, but in reality the ban is valid only for the Armenian side.

This way Georgia has cut off Armenia from reinforcements from its ally Russia.

If these numbers by Armenia are to be trusted, it means that for every nearly 10 losses of the Azerbaijani side, Armenia loses 1 soldier.

A joint press conference will be held after the meeting with the Armenian foreign Minister.  During the visit of Minister of foreign Affairs of Greece Nikos Dendias will meet with the Prime Minister of Armenia, Nikol Pashinyan and the President of the Republic of Armenia Armen Sargsyan.

Turkey and Greece are at odds when it comes to the illegal migrants that were, until recently, flooding the borders, as well as Turkey drilling in the Eastern Mediterranean, with Greece, Cyprus, France and others strongly opposing it.

Iran also appears to be in some form of discussions with Armenia.

Levon Ayvazyan, Head of the General Department of Defense Policy and International Cooperation of the Ministry of Defense of Armenia, on October 12th met with Colonel Bahman Sadeghi, the newly appointed military attaché of the Iranian embassy.

During the meeting, Ayvazyan presented the situation created by the aggression unleashed by Azerbaijan against Artsakh (Nagorno-Karabakh), and the course of the ongoing respective hostilities.

They reflected also on the impact—from the viewpoint of regional security and stability—of the involvement of a third party—Turkey—and of mercenary terrorists in this conflict.

General of the Libyan National Army Ahmed al-Mesmari confirms the transfer of terrorists from Turkey to Azerbaijan. As reported by Armenpress, the general announced this on the air of “Sky news Arabia”.

In particular, the volume of Turkey’s military supplies to Azerbaijan since January 2020 increased from $20 million to $123 million.

In addition, in September 2020, deliveries of drones and other types of weapons increased to $77 million.

Sales of drones, rocket launchers, ammunition and other equipment have skyrocketed since August this year. If in July they were $ 278,880, then in August they reached $36 million, and in September – $77.1 million.

This points to the fact that Azerbaijan’s offensive on Nagorno-Karabakh was not a sudden action, but rather planned thoroughly in advance.

Azerbaijani forces appear to be having success, as the city of Hadrut is largely in their control now.

A propaganda video was also released, shot near the conflict line.

And finally, two photographs that show the glorious Azerbaijani army and its Turkish support, and the way they treat the Armenian side’s killed soldiers.

Any similarities to actual terrorists are accidental. Mr. Bean knows why things are happening the way they are. 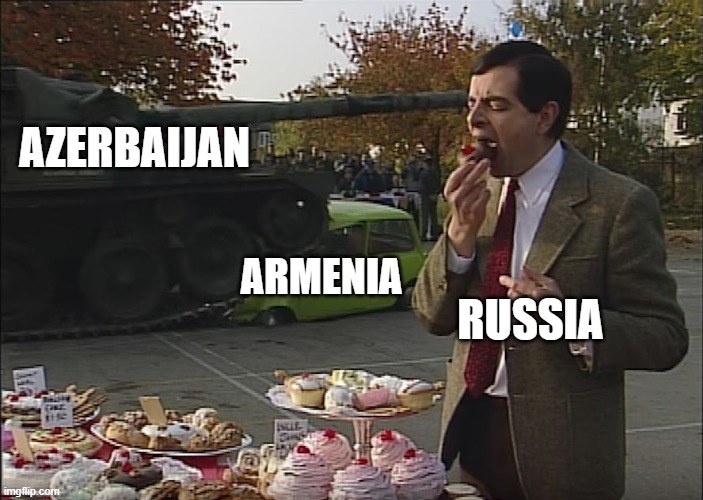 Why the need to tell us about your possible father?

The list should include the USMC, who regularly visit your home.

My dad is Rowan Atkinson

Could be, you have the mannerism of a Mr Bean.

But it could also be anyone of the 1 million or so US forces who need to unload their business into the local whore population.

my country has never had US troops stationed. but nice try. I know about Khazars so will not ask, but any German blood you have?

Your country is a shithole, full of dead 4skins.

Ok, we have someone triggered. Now I know where you are from. Tell me about North Caucasians that walk around your country as if they are owners of everything.

You know jack shit boy. If you were on this site for years, you’d still know shit.

What a schmuck you are.

It is quite telling that Azerbaijan supported by Turkey, Israel and Pakistan is not making enough progress in NK to declare victory to stop this increasingly brutal war. Since Armenia has not been able to garner any international support it is time for it to leave Nogorno-Karabakh and end this illegal occupation of Azerbaijani territory. Even India has remained neutral in this conflict considering the questionable legality of Armenian position.

Stop trying to be relevant. Pakistan and your India has nothing to do with this war.

Pakistani SSG troops are openly fighting for Azerbaijan as even acknowledged by their military chief. This is becoming more regionalized due to the Jihadis pouring in.

I don’t think that’s true. Any evindence to back it up?

And finally, two photographs that show the glorious Azerbaijani army and its Turkish support, and the way they treat the Armenian side’s killed soldiers. Stupid south front we both know that there’s no bigger thrill than accidentally opening the dishwasher door in mid-wash cycle! :)))))))

I hope to see that happening to many Hezbo rats too.

Who’d have thought that.

Pro-EU Pashinyan’s ppl getting lolacausting for a second time lmao.

No normal human being can call himself a Turk.

Armenia and Artsakh are illegal aliens in NK.

Well u were slaves of Turks and sucked their dicks for 500 years, that makes u subhuman lol 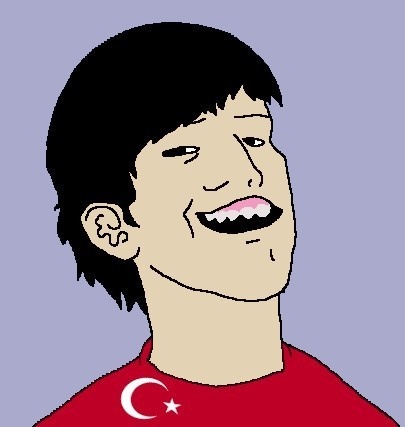 Lunch break is over Mustafa, back to work now 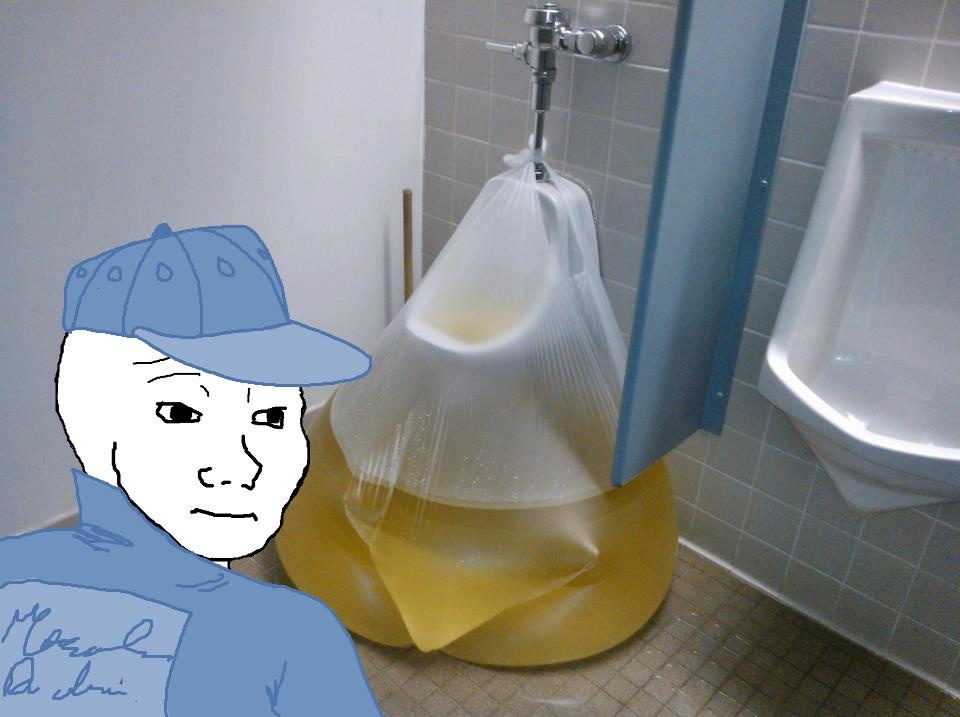 I didn’t know Beavis and Butthead were Turkish.

Shut your piehole Greeko, don’t talk about Jews or Turks. You will show us respect or we will confiscate every Greeko church asset in Jerusalem. Understand?

Keep digging your own grave, Jew.

That why Greek become Gaygreek, I read in history book hahahhaa

And the Turks will be sucking German and US cocks for the next 500 years.

How many wars have the Russians won against your goatfuckers?

The US and Germany wont be around in 500 years.

USA and Germany are both older states than Turkey.

What contradiction do you see you muppet.

You claim the US and Germany won’t be about, not me.
You are a muppet of epic proportions.

Btw, what evidence do you have to support your statements, have the Germans contacted you to tell you they are going to be French, or is it all in your little mind?

what can you expect from backward country like Azajabajan ? They are still steppe nomads .

hahaha they chop off head!

There are many village around Hadrut…we only see small group of infantery scout soldiers in an Empty zone….AZ cannot carry Tanks, Trucks and APC there because ATGM team wipe them off…

Coincidence? I guess not