The Azerbaijani Armed Forces have targeted a Russian post on Armenia’s border with Iran, the WarGonzo Telegram Channel reported on October 29.

The Russian border guards directorate in Armenia, 4,500-man strong, along with the Armenian border guards is responsible for the protection of the Soviet-era border of Armenia with Turkey and Iran.

According to WarGonzo, the Russian post was targeted with at least four shells. No human losses were reported as a result of the attack.

In a statement, the Ministry of Defense of Azerbaijan denied attacking any post on the Armenian-Iranian border. The ministry said such claims are “complete misinformation,” accusing Armenian forces of targeting Azerbaijan’s border with Iran.

“We reiterate that we do not have any military objectives in Armenia,” the statement reads.

The Ministries of Defense of Russia and Armenia have not released an official comment on the matter, so far. False information are usually dismissed within a few hours.

If confirmed, the attack will be a violation of Armenia’s sovereignty and an aggression against the Russian military. Azerbaijan could face serious consequences.

Pinocchio War-gonzo strikes again just like another blatant lie ”Turkish-F-16’s striked the civilian objects at N-k..it was operated under personal order of Erdogan”

Stop lying to yourself. If can’t, don’t lie to others at least.

what makes you think that ı am lying?

nonsense…you need facts to accuse me..it is very ugly to brand someone liar while you dont have any proof… here is a screen-shot of his lie and this news is also provocative and lie..how can Azerbaijan army targets Russian posts?it is committing suicide..just say accidentally hit and go.. 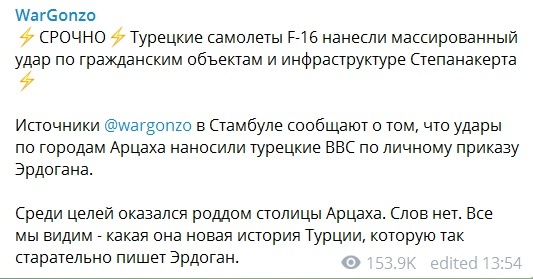 Pegov made footage and proved AZ and TR lies bout Gadrut. That’s why you (and Aliev) are so mad. Take it easy. Your lies makes a fool out of you.

sure ..he lives in his bubble with his lies xD

That’s why you are paying so much attention to him, ha-ha-ha. Can’t forget Gadrut?

no..ı never focused to him,ı focused to tool and materials which he is presentating to media in provocative and silly way..he is just like anti-vaxxer…

Antoshka is right. Hadrut is still under Armenian control. Pegov might be in Khabarovsk, but he has local sources to take pictures. 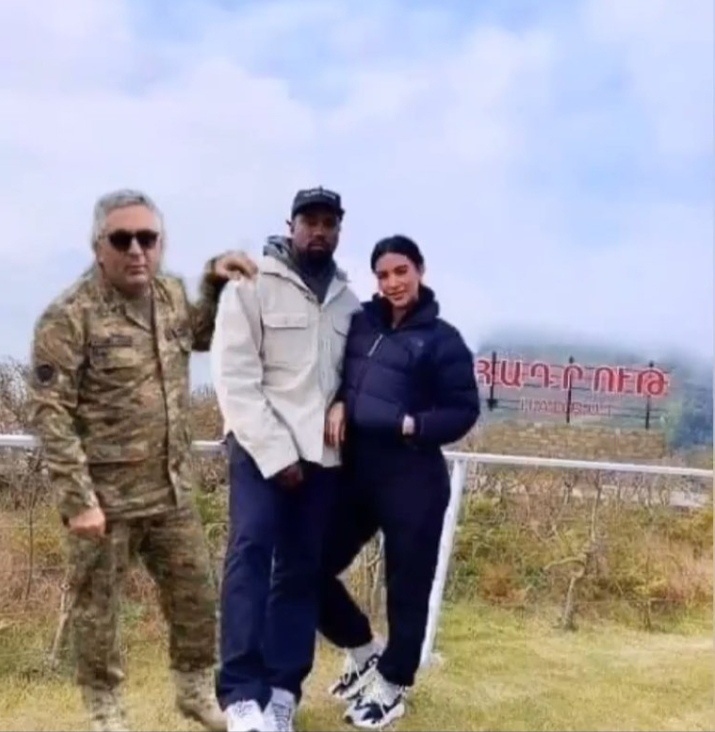 War-gonzo was near Azerbaijan artillery crew when they targeted russian posts…blind fanatics :)))

Actually, the claimer must provide evidence to his words, not vice versa, this is the general rule.

Could be accidental fire, Iran has bit hit several times with stray shells

Russian news outlets wrote that in accordance with the inside information, several grenades felt close to Russian troops. But word “close” could mean 100 meters or 4 kilometers.

The last president who ordered the shelling of Russian positions ended up chewing ties and being thrown from his own country.

Nothing will happen. Nobody got killed even if the report is true and Putin has zero intention of getting involved. As a best case scenario for him Pashinyan falls after Nagorno Karabakh is surrendered. As a worst case Armenia enters NATO but Russia retains good relations with Azerbaijan which is, of course, richer and more important than impoverished landlocked Armenia. Sultan Erdogan is of course the spanner in all the works.

Nato only are related in Armenia by the Minsk treaty, which try to help any of those new countries with negosiations onlly.

UN is supporting NK is a part of Azerbaidian and no new country at all.

Ruusia and iran will step in!

russia might grow some balls and bury these rat dog turk terrorists! i have hope that putins balls will drop

Russia will do nothing. Once Putin failed to stop this war from starting, Russia’s only option now is to keep out. Anything it does will make things worse for it.

It depends of the situation…we have seen people executed and terrorist deployment in NK…Russian military staff are very forceful in decisions when it comes to former Ex Soviet countries and Russia area of influence…if the fall of NK under hands of Turkey ( NATO) can cause problems in CTSO and consequently in Russian bases in Armenia…be sure that Russia will intervene in some way.

I like that you don’t lose your hope easy.

I thought that Armenia will lose NK in few days….but when AZ failed to open the North and East front and retake the south along Iran border to avoid Armenian artillery….then I think that it wont be a easy task for AZ forces because clashes are now close to Armenia border which supply with constant equipment and soldiers the west front….for other side as we have seen in videos they are modifying the trenchs and expanding them which makes difficult the attacks compared the first week where all soldiers and vehicles, tanks and artillery were all together with little protection!

Well, good luck! I’m not that optimistic as you.

If? What’s the if? Fall of Artsakh is disaster not only for Armenia but Russia. Longer intervention takes, less chance of saving anything much.

That’s pretty pro-Turk. I condemned Russian inaction so far, but Russia could maybe still plead being taken by surprise (despite gloating Russ-trolls here) by (scale of) aggression against its fellow-Christian protectorate, and plead necessity of time to take stock and reposition, but then act to level playing field at least. It’s really NOT in Russia’s true interest to let Turko-jihad triumph in Kavkaz over Christian Armenians, despite financial aspects.

Of course it isn’t. Putin’s appeasement of Erdogan is incredible and inexplicable since literally every war Erdo is fighting, in Syria and Libya and Azerbaijan, is against Russian aligned forces and against Russian interests. If Russia had got anything out of it I would’ve understood, but except for Russian librarians and doctors holidaying in resorts in Antalya, I don’t see any.

Continue with your hope. Russia not needs Armenia in its current configuration. There will be hardly pro Russian Armenia or there won’t be any Armenia.

Honest question, did the current leader of Armenia harmed Russia in any way?

Pashinyan threatened Russian security in multiple ways. IE he allowed Soros to organize courses for rioter with Russian citizenship. They were trained in summer camps to fight in teams against anti riot police.

So please help me understand, did he occupy a govt position that alliwed him to allow Soros to train rioters, before he became PM? And how attacking Armenian riot police affected Russia, were they under Russian command?

Of course Pashinyan has all the authority to deny or allow Soros activities in his country. And Russian citizens were trained to fight Russian police not Armenian.

So the fight against the riot police happened after he became PM? And how did fighting between Armenians, harmed Russian interests so much to call them traitors. Did they expel some Russian businessmen or what exactly?

Sorry this doesn’t make thing more clear for me. 1. What was doing Russian anti riot police in Armenia? 2. Was Pashinyan already prime minister when this happened?

1. There was not Russian police, but activists were trained to fight it.
2. Pashinyan was in power.

Ok, so you said in other comment that he fired ifficers trained in Russia. That’s the kind of answer I was waiting when I asked you how he betrayed Russia.

Cause fighting the police in Armenia is no sign of betrial for Russia IMO.

Bacon, you are not so stupid like you pretend to be. Russian opposition activists were schooled in Armenia to right Russian police in Russia. This training was paid by Soros.

Man, I think our both English sucks, mine more, that’s why we don’t understand each other. So Armwnians attacked Russian police in Russia?

Ahh I got it now. Thanks.

Hard to understand all these commenters jumping on their wishful conclusions, without any reasonable facts. Why would you disappoint yourself if tomorrow nothing happens. Maybe im in a wrong site and this is where all confirmation biased people hang out…

Maybe you’re right, you may be the most intelligent Turk troll here but you are what you are and this site allows everyone to give their two cents. You might try liveuamap, they are run by Ukrainians so they are much more welcoming to terrorist sympathisers and the kind of speculation and wishful thinking that will be more agreeable to your delicate sensibilities, they also automatically delete any comments that might challenge those sensibilities. I think if you leave here for there you will improve the average intelligence of both communities.

Ok, fine by me, stay here and keep whingeing like a little girl about other people having an opinion then…

ahahahha. you seem to still be in the denial stage. Araik will be more truthful than Arsurn. But suit yourself. Whatever source makes you feel better in a short term:))))

I don’t know or care what you mean by that, Armenia made their bed when they installed a zog puppet and spat on their only ally, now they’re getting raped by filthy Turks in that bed. My only skin in the game is that I like to see videos of dead or dying Turks, nobody is paying me to shitpost on every topical article.

Gonzo journalisme is created stuff made only for sales. People here seemes to buy it. Haha.

This is getting really interesting!!

Azeri trolls shouldnt play with fire.
Albeit it could be Armenian trolls as well trying to pull an Operation Gleiwitz Lite…

It couldn’t be a false flag attack could it ? Or do you always believe one side ?

Did you read my comment?
I literally said that…

Read it to quickly. My apologies.

This must be fake news. The Azeris would never give the Russian an excuse to enter this conflict. If a Russian soldier is killed or wounded, Russia will respond. Turkey and the Azeris know this. Maybe a false flag operation but no chance this was an action taken with Azeri and Turkish approval.