The Azerbaijani Armed Forces have made more ground gains in the disputed region of Nagorno-Karabakh, President Ilham Aliyev announced on October 23.

According to the President, Azerbaijani forces liberated the following villages:

Earlier today, the Ministry of Defense of Azerbaijan said its forces had carried out intense strikes on Armenian forces in Nagorno-Karabakh. Moreover, the ministry claimed that Armenian forces are suffering from shortage in supplies.

“The enemy practically lost control of the troops. Due to the lack of regular army units to defend combat positions, civilians are forcibly brought in to replace them,” the ministry said in its daily briefing.

Armenian forces are sustaining fairly heavy losses while attempting to slow down the advance of Azerbaijani troops in Nagorno-Karabakh.

The conflict in Nagorno-Karabakh is without a doubt heating up. A political settlement doesn’t appear to be near. As for now, Armenia and Azerbaijan can’t even agree on a working ceasefire. 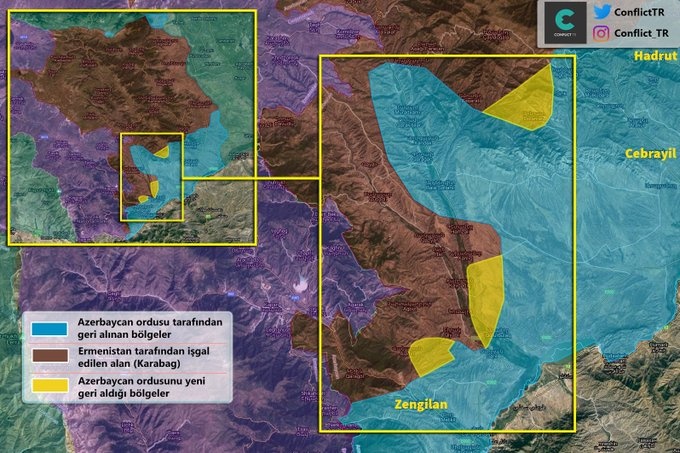 PZIVJ is triggered again:)) its a common reliable source…many foreign journalists use it too…not only turks…

in fact there is not advance at all… Armenian army is turning up-side-down the whole battle field:)))

ARA!!!! Vhat ve do now? Ve aree lozing the varr. They enemy has exposed us.

https://militarymaps.info/ is better, but it’s not free. Guys from there never post unconfirmed info.

https://caucasus.liveuamap.com/ is better, it’s free. Guys from there never post unconfirmed info. And they are not even remotely related to this conflict.

Never trust anything from UA.

Awesome comedian, as a president have no idea.
But still you didn’t answer my question. Why would liveuamap lie about Karabakh?

So did Putin, so?

Thanks for the link

Oh nooooo. Me not like this info, me in denial with this info. Fake. Araaaaa. We are being mamat kunem-ed, araaaa. Genocide, araaa 4000years, araaa Tigran the great, Great Armenia:)))))))) Arrrraaaaaaaaaaaa.

Soon that thiny road that seperates Nahcivan from Azerbaijan will be removed then shalom armenia :D

clearly Armenians now in a strategic disadvantage if Yerevan does not intervene Nargono-Karabakh will fall to Turks who will massacre civilians.

Turks are not even in N-K….

The situation in the battlefield is clear. Artskins have lost. N-K is never Armenian. N-K is is a region inside Azerbaijan. It will stay that way. 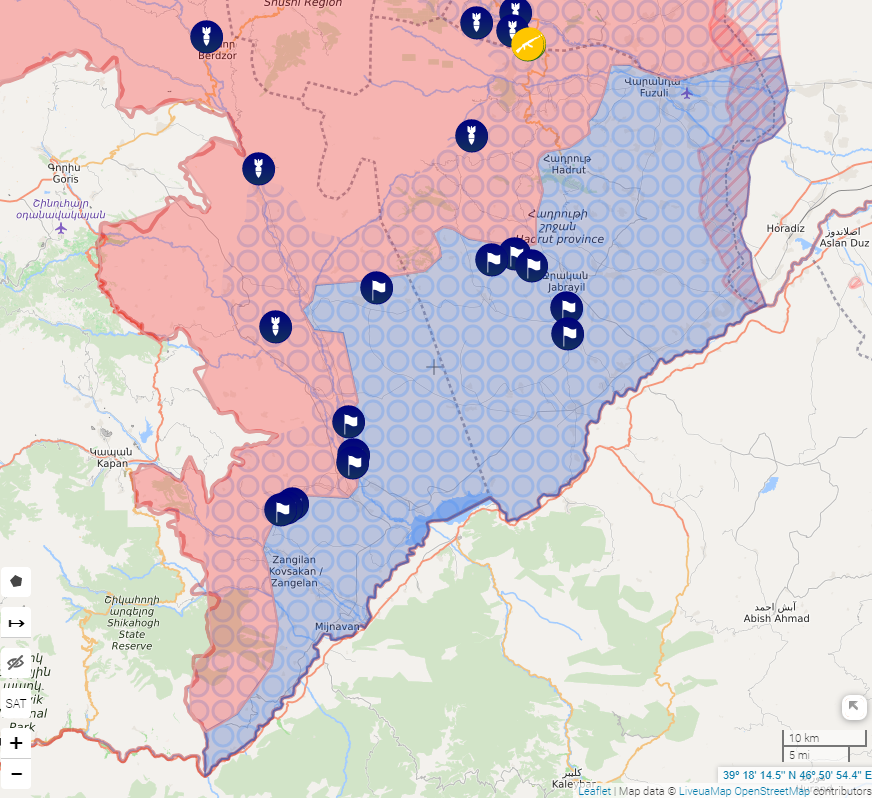 The battlefield in N-K is untenable for the Artskins. They have no control of the sky. They out of armors, artillery, trucks, heavy weapons, fuel, ammunition. And the most important, they are out of medical supplies. Most of the injured soldiers will die from their wounds.

Also the Artskins do not have communication since they are cut off from electricity and fuel to power the generators.

Now with winter coming, those soldiers hiding in the mountain can’t survive. They will be frozen dead in their rate holes.

Artskins will have to withdraw back into Armenia. Most of the civilians have to go with them. 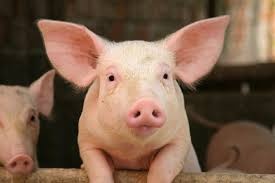 Yes, that is Artskin pigs. LOL.

Artskins are good at fathering pigs…. 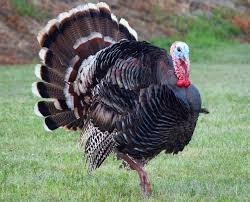 Looks like total victory for Azer in a week or 2 weeks at most.

How can Armenians in NK continue to fight over the winter with no food or ammo? It will be over long before then. Like I said a week or 2 Maybe a month if Azer decides to slow down which would be a mistake. Always advance when you can.

capturing supply routes wont be easy…it might take some time..clearly they have defensive advantage…both of them are in mountainous areas…even after capturing them armenians can resist for a while…but not for so long i agree with you there…

They don’t have to capture supply routes just have fire control with artillery over them, along with air power and then there is no supply route.

There is no ground cover in NK in the winter and only a very few roads that can be used, which is why they are short of supplies already with only air power against the supply routes.

Putin is a Jew.

The richest man of Israel Roman Abramovich says so.

Russians are an abomination just like the Christian-hating Jews and Muslim Turks they obey.