Azerbaijan’s President Ilham Aliyev announced on October 21 that his troops had captured 22 new settlements in the disputed region of Nagorno-Karabakh.

Earlier today, the Ministry of Defense of Azerbaijan announced that load of weapons and equipment had been seized from Armenian forces.

The Azerbaijani MoD released footage showing several T-72 battle tanks, BMP-1 and BMP-2 infantry fighting vehicles that were recently captured in Nagorno-Karabakh. Most of the vehicles appeared to be heavily damaged.

The battle in Nagorno-Karabakh appears to be heating up. Meanwhile, the ongoing Armenian-Azerbaijani talks in the Russian capital, Moscow, are yet to bear any results.

My guess is that, they will try move north, to Lachin, rather than moving towards mountains directly. If they manage to do this, then, they will attack from every side except from north-west, leaving a corrdior for Armenians to withdraw.

Will be bloody for the armenian soldiers to escape to Armenia when Lachin corridor is closed.

If Armenians start to retreat, I don’t think Azeris will interrupt them that much. You know, basic rule of a battle, always give a space for enemy to retreat. Well, unless you want to annihilate them completely, which is not aim of Az. in my opinion.

always remain a space for enemy to retreat.
or they will fight to the death and you lose more men as well.

The Turkish military intelligence and Pakistan’s ISI is recruiting Afghan mercenaries to go fight against Armenia. Indian media had reported this last week and now even the controlled Pakistani media is reporting it.

The Objective
Reply to  Ashok Varma

From Armo MOD: Fake news we will win

It is so clear that, those Artskins run out of ammunition, fuel, armor, weapons and other war supplies. They ran as fast as they can. Before the Azeri army chases them.

They have to watch out for the drones from the sky.

yeah keep writing it mate and maybe you believe it! now write it 100 times! gogogo!

Look i dont care about the nationalities,etc,but de facto is,that farmer is killing farmer,worker is killing worker,while the jews are laughting all the way to the banks

Wars are the Jews harvest

“Wars are the Jews harvest, for with them we wipe out the Christians and get control of their gold. We have already killed 100 million of them, and the end is not yet.” (Chief Rabbi in France, in 1859, Rabbi Reichorn.)

Nothing to do with Jews, Christian or Muslims. This is Azerbaijan vs Armenia.

………………stop talking out of your arse. This is a sectarian war, and whilst there is a far greater objective, which is not being widely spoken of, the destruction of Christianity of high on the agenda…………….perhaps you need to brush up on your history of the region.

You don’t have the balls to say the truth.
You are hiding behind your finger.
This war is exactly about the second Armenian genocide by Turkey. You are taking like you are superior but you are subhuman.

sevenmoons is a dirty jew

Don’t talk to this cretinous you are loosing your time.
The only thing he wants and please her is create the ottoman empire. To make war crimes genocides and stealing things from other people like this is something normal.

………….the video looks like a scrap yard. There were no markings on any of the wrecks, they could all have been azerbaijani…………………no date/time stamp………….this could have been filmed in Idlib.

Some are the remaining parts of Armenian army(They probably fleed)..the others are striked by Harop’s..its a Mobility kill..This is what happens after harop strike to immobilise the vehicles for a while not total destroy..the photo shows harops engine(in red circle) stucked on tank after the strike … 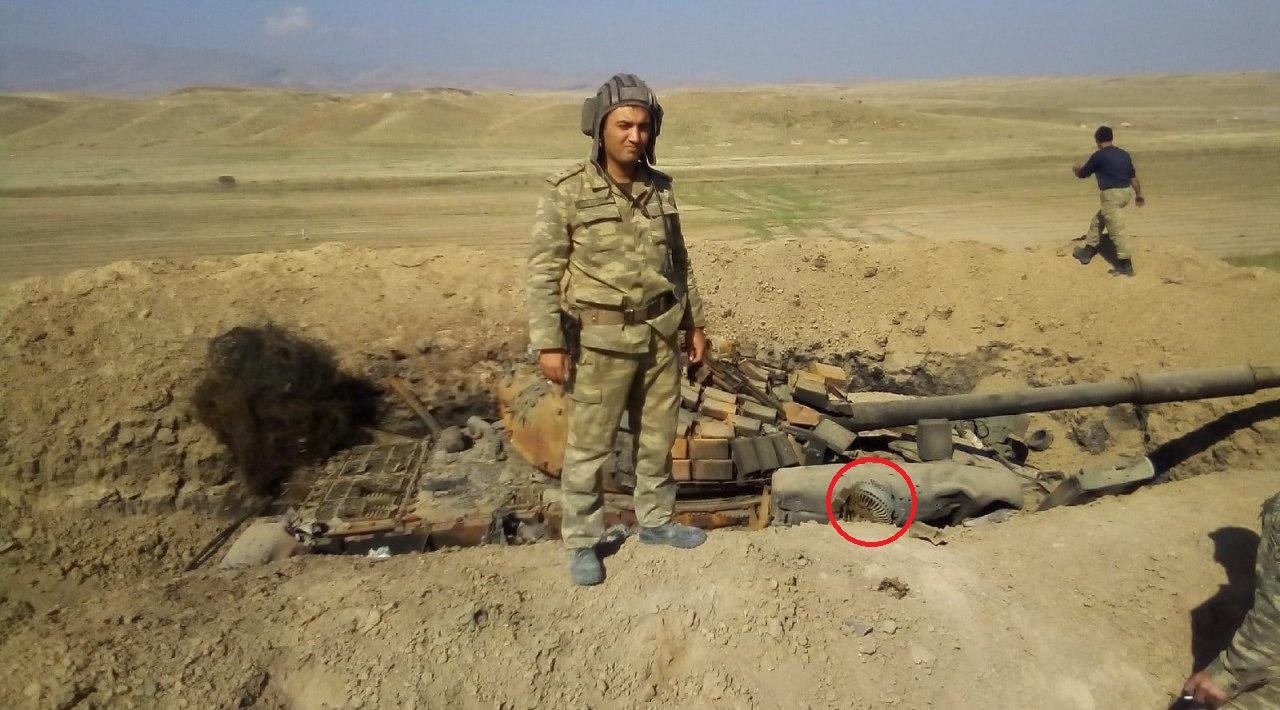 ……………you’re kidding right ? You think anyone would accept this
as proof.????? This could be the Iraqi or Syrian desert.

That hole for the tank is very very similar to others we see in the drone footages. Besides, maybe I am wrong, but the camo of the soldier do not look like Iraqi or Syrian. Finally, it is not a desert, but steppe and it looks like a valley of NK to me.

İts Azerbaijan soldiers uniform..ı am telling you my opinion..its up to you…

I am not interested in opinions…………….I want facts, that is why we are here.

thats true..but if you dont get azerbaijans mod footage as a fact,ı can only tell my opinions by induction ..sorry:)))

At 1:17 there is a cross at the top of the small brown tower. Well…. you can of course argue that it has been set up to convince audience.

If you look at the war, you’ll see that Azerbaijan effectively have fire control on the Kelbajar corridor. With the recent advance, Azeri army can have fire control of Lachin corridor soon. This will shut the supply route into N-K.

Artskins days are about to over soon. Better run before it is too late. 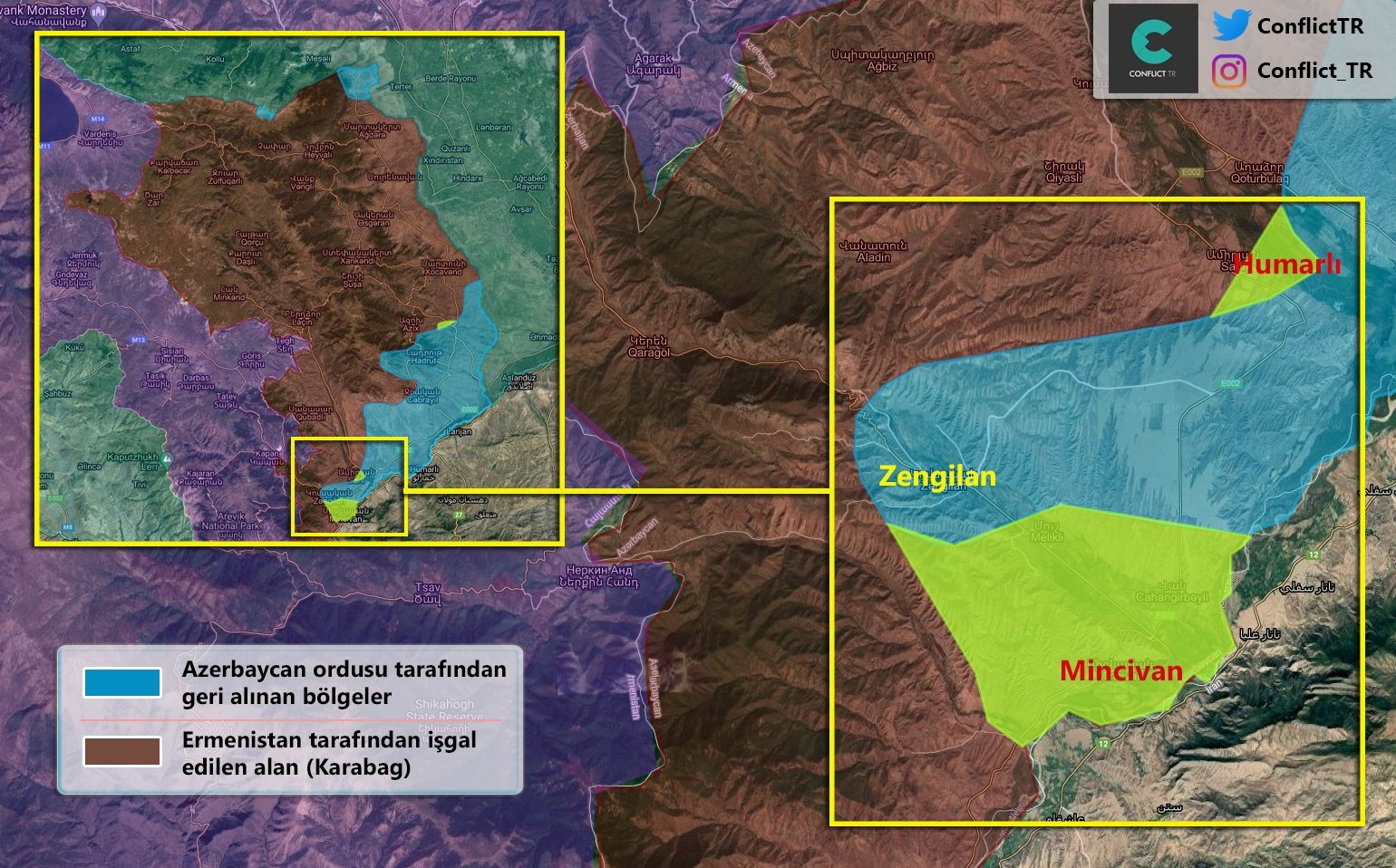 Little little into the middle:)))

Looks like in a couple of weeks or less the only thing to discuss will be Armenia’s unconditional surrender.
Azer is now advancing rapidly. Armenian military in disarray. 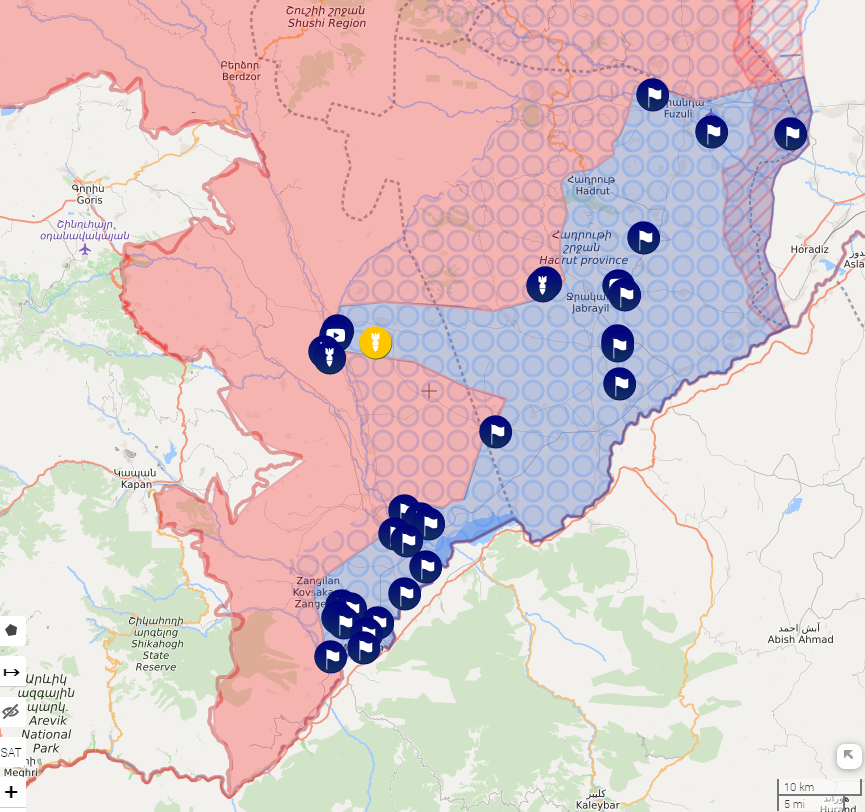 Maybe not so fast. The Azeris probably need to connect the two advances by securing both sides of the river corridor between them for supply and road links. The Artsakh military was forced to fall back to a more defensible position after loses from drones, etc.

If the defense line is broken, there is no point for resisting. Just give up. Ain’t nobody have time to build new defensive lines, and Azerbaijan is not going to wait for that. Lost cause.

Azerbaijan has captured more equipment than they have lost.
War is expensive they said, you can’t afford it they said.