On October 7, Azerbaijani and Armenian forces exchanged artillery fire in the region of Nagorno-Karabakh, where a heated battle has been ongoing for more than ten days now.

The Ministry of Defense of Azerbaijan accused the Armenian military of shelling the towns of Tartar, Barda, Aghdam, Agjabadi, Fizuli and Jabrayil. No casualties were reported. The towns, which are located on the frontlines, were likely evacuated in the early days of the conflict.

Azerbaijan claims that Armenian fire has so far claimed the lives of 27 civilians and injured at least 141 others. 376 houses and 63 facilities were allegedly destroyed.

While Azerbaijan was accusing Armenia of shelling civilian settlements, its forces were pounding the Armenian-held town of Shushi. Azerbaijani artillery strikes caused significant damage to a number of civilian facilities in the town as seen in few photos shared by the Armenian Unified Infocenter.

#Azerbaijan targeting the civilians and civilian infrastructures in the town of Shushi, #Artsakh #NagornoKarabakh#NKpeace#StopAzerbaijaniAggression pic.twitter.com/AjCwKVNi1a

Meanwhile #Azerbaijan officially claims that they are targeting only MILITARY facilities, their Armed Forces are targeting the Culture House in Shushi#StopAzerbaijaniAggression #NKpeace pic.twitter.com/S2TRdklcrv

At least 21 Armenian civilians have been killed in Azerbaijani shelling on Nagorno-Karabakh since the outbreak of the battle there. More than 90 others were injured.

The battle in Nagorno-Karabakh will likely claim the lives of more civilians on both sides in the upcoming few days. A ceasefire doesn’t appear to be possible now. Azerbaijan and Armenian are still not ready for compromise.

Hehe…Tartar is the equivalent of hell…but no wonder

Perhaps a strike on turkish HQ in Ganja. Look at chevrons and different camouflage.

How about give everyone a Turkish badge! LOL.

Those Artskins can only bomb civilians with dumb bombs….

And a lot of them do not even explode. LOL.

Gyanja, airfield near this city, is the base of turkish F-16 and possibly UAV operators. Two men in different camo and with turkish-like chevrons is not just a coincidence. A plane (not big “Embraer”) of state medical service of Turkey has flown to Az. after that. Seems as some wounded there.

Last night’s attack by Azerbaijan on the Armenian positions ended in complete disaster.

“Azerbaijani troops and groups of jihadist fighters from Syria, after yesterday’s defeat, are gathering on the border with Iran. Some of them are trying to cross the border,” the report said.

“On the night of October 6, the Azerbaijani armed forces tried to advance and strengthen their positions in the southeastern direction of the front in the conflict zone in Karabakh,” the press service of the Armenian Defense Ministry said.

“At night, the enemy made an attempt to advance and fortify their position in the southeast (in the area of ​​Jebrail), but the Armenian troops hit the units of Azerbaijan with rockets and artillery.

At 06.30 (October 7), after another rocket and artillery attack, the TurkoAzeri and other jihadi mercenaries had dozens of dead and 22 damaged tanks on the battlefield “, the same announcement concludes.

Within a few hours, Azerbaijan lost not only the initiative of the movements, but also a significant part of its army.

The Armenians, retreated from some border points, and through the prevailing surrounding hills they cripple any attack by Azeris, Turks and jihadi mercenaries, causing headaches in Ankara and Baku. 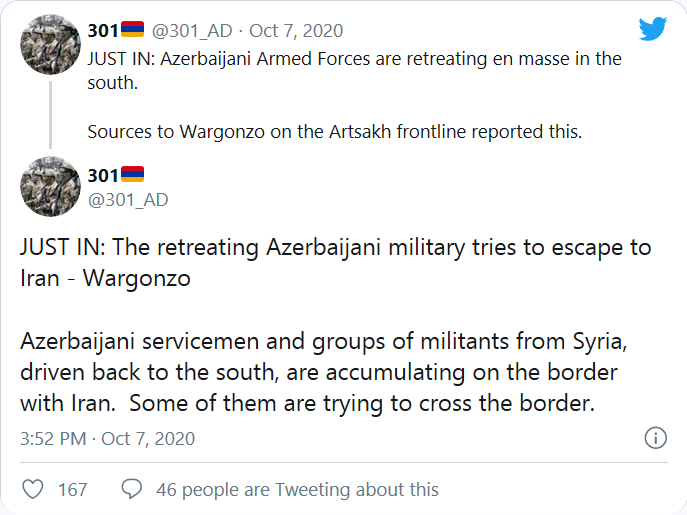 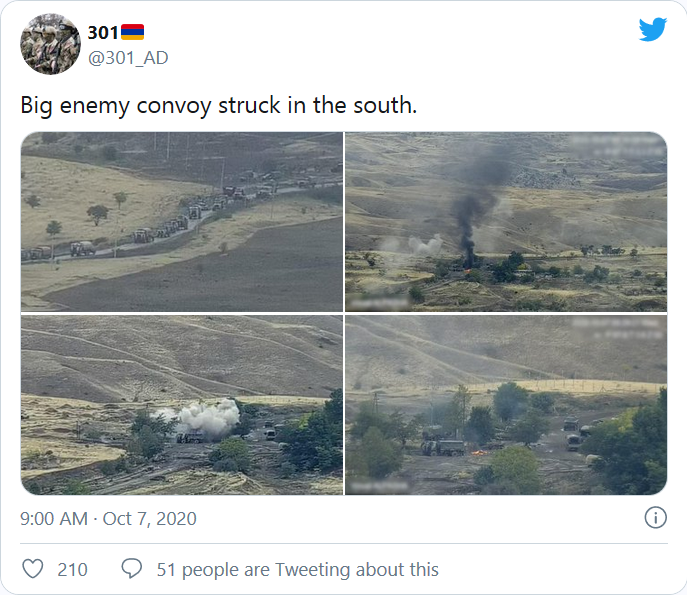 Are you an Armenian? Could you please translate me what is written on the plate and the banners? It is claimed to be from Jabrayil

Thank you for translating but how about the plate? It may give a clue about the location. Here a bigger version of the picture:
https://caucasus.liveuamap.com/en/2020/7-october-azerbaijani-military-in-jabrayil

Armenians did not even get time to flee. Their soldiers must have been killed…. 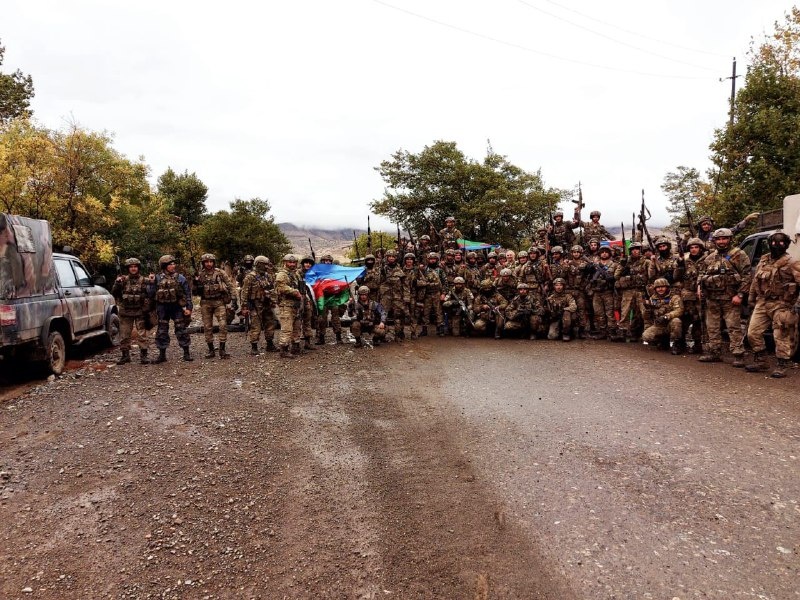 No matter what you say. It is the battlefield that matters. Azeris are making great progress everyday.

No ceasefire until Armenian pigs withdraw out of Azerbaijan.

Those Artskin are being crushed every day, and night.

only 1 moron is sufficient; we do not 7 CIA morons

Maybe the tree on the left is a certified Jabrayil species?

Scores of Armenians living in France have arrived in the illegally occupied Azerbaijani territory of Nagorno-Karabakh to fight alongside Yerevan forces, French media reported Wednesday.

“Armenians from France are starting to arrive in Armenia to fight the Azerbaijani army on the Nagorno-Karabakh front,” Georges Malbrunot, a senior reporter of French newspaper Le Figaro said in a tweet.

I know how to deal with some people who comments shit when you reply to them, you know when they hit you with “you don’t know nothing” / “you literally do not know what you’re even talking about” bla bal bal.
They never saying anything other than that, ask them question/s they still saying same shit over and over again like a bot.
Copy their reply….that’s it. They would know how stupid they sound, which is very childish thing to do but it works.

I’m getting the same feeling here, between Azer and Armenia, point the finger at each others, one saying more BS than other.
It is word war.

P.S. (I know it works against COD players and xBox fukers): Let me tell you a story, I replied to someone on a video about US troops in Iraq. The youtuber was pro-American+Zion guy, one of those people who think US is the greatest and they never did anything wrong.
In the comment one guy said “how US help Iraq to become great” and I jokingly said how US killed 1m+ Iraqi civilians mainly kids and women by sanctions before US invaded them under BS that Saddam have WMDs and he is linked to Al-Qaeda. Then from out of nowhere this fuking guy comes and said “you don’t know nothing” which I reply “tf” which then he replied “you literally do not know what you’re even talking about”. Asked that fuker some questions, if his father beat his meat with him he also replied by “you don’t know nothing” which is true btw, and that shit when on, I told him about the BS US did to Iraqi people and he just said the same shit over and over that fuker never answered my questions btw.
All he said was US own Iraq and Iran have no power and BS like that which was funny, I also did drop American school joke but he misunderstood, which made me think to check his youtube so I did the fuker had one video where he played COD WW2 and one like (most likely he liked his shi8 as I was the 2nd viewer) AND OFC I HAD TO DO IT TO HIM and so I dislike his video. It ended there he is mad because he commented back saying same shi&. I’m gonna copy past this shi8 back to him, just to have some fun.

The point was if some saying BS and accusing you of something, just do the same thing as them.
Like Azer and Armenia, they both accusing each other of war crimes….

Public service announcement: SevenMoons is a Turk ISIS cock lover, who was raped by his uncle, and has nothing better to do than to spam literally every comment, and then reply to his own comments.