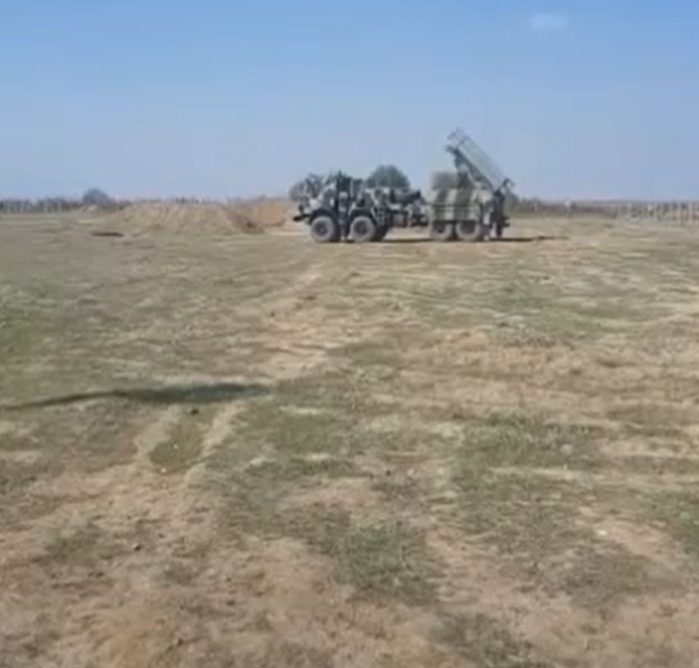 What’s seen in the video coincides with what Turkish company ROKETSAN said it used to test out the capability of its system, as it appears to be loaded on a Kamaz truck.

The appearance and camouflage of the vehicle in the images coincide with the carrier Kamaz vehicle of the TRG-300 Tiger Missile systems, which were previously supplied by ROKETSAN to the Azerbaijani army. 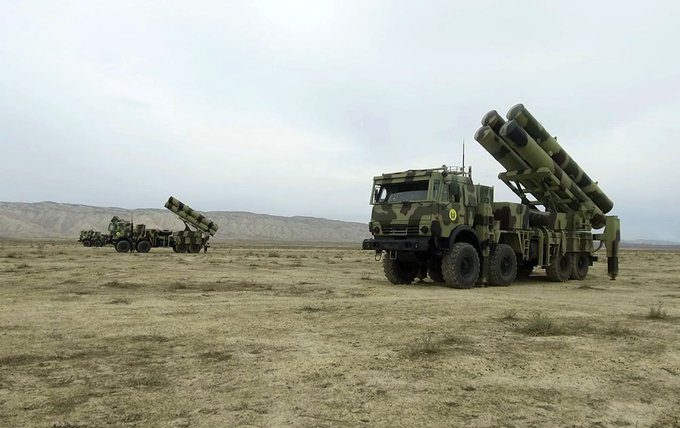 The system likely works in conjunction with the Turkish-made Bayraktar TB2 combat drones.

The video shows how the Bayraktar TB2 laser marking works in conjunction with the TRLG-230 artillery system.

“We continue to work on technologies that will bring new capabilities to the missile race, especially to our security forces who are in the field day in, day out. A laser seeker head has been integrated into the TRG-230 missile system.

This missile system, named TRLG 230, has been developed in a way that it can hit targets marked by UAVs and UCAVs from land. The target marked by the Bayraktar TB2 UCVA’s laser, was hit by a laser-guided 230-millimeter missile system. This new development will especially strengthen our soldiers’ position at the front line.”

Evidently, this was used against the Armenian and Artsakh forces in the Nagorno-Karabakh War, between September 27th and November 9th.

The current situation, on the ground in Nagorno-Karabakh is relatively calm, with the most recent movements show on the map below. 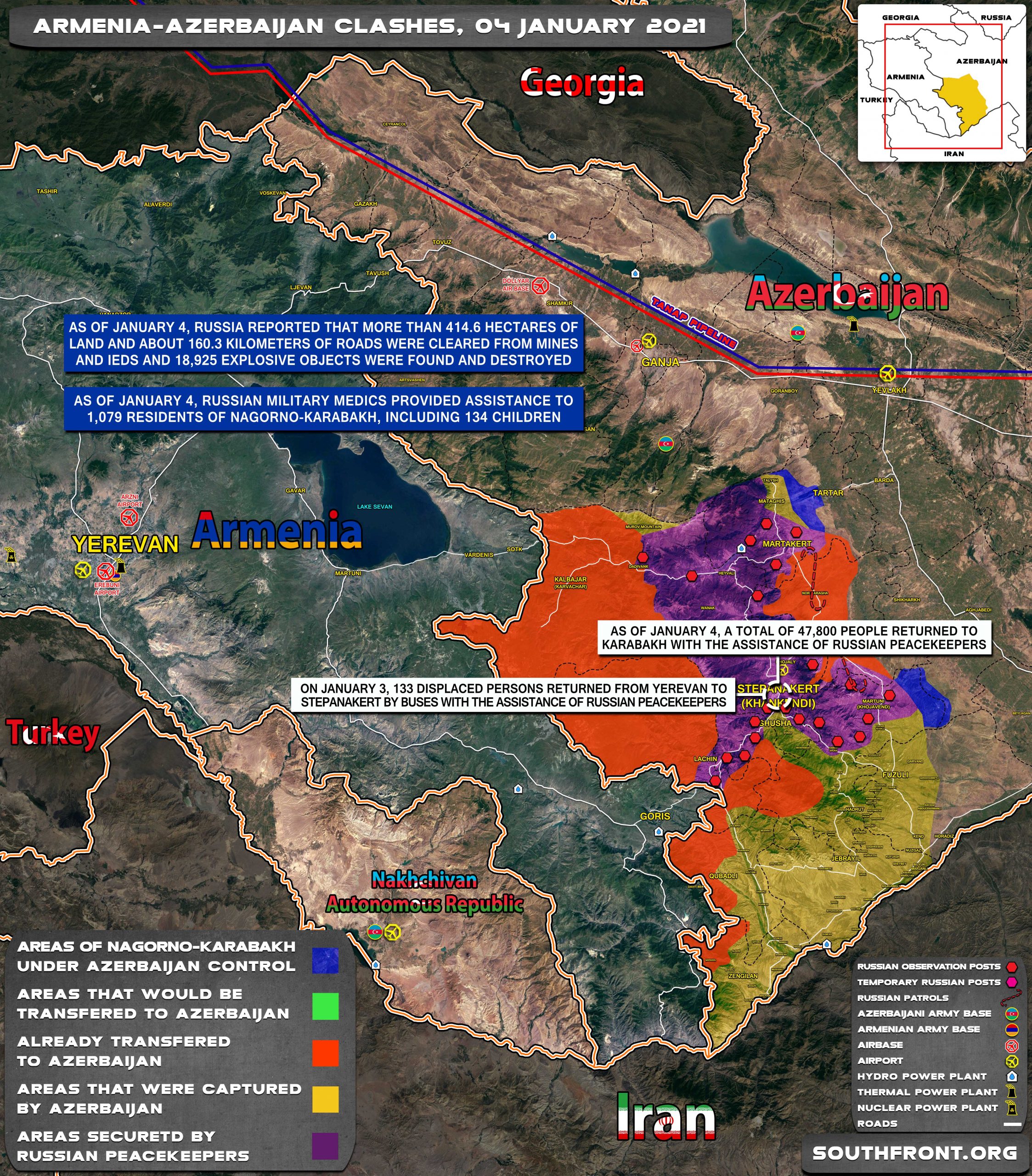 The Russian Peacekeepers have standardized their observations posts, and a video was released showing how that underwent.

Thomas the Turk,you are full of it… The only reason Armenia is not invaded (by Turkey) and N. Karabakh completely occupied (“liberated”) is Russia. Russia is “allay” to Armenia while N. Karabakh is part of Azerbaijan not recognized by anybody including Armenia. So officially it was Azerbaijani civil war, not aggression on Armenia…Thus, no need for Russia to get involved!

The only reason Armenia is not invaded (by Turkey) and N. Karabakh completely occupied (“liberated”) is Russia – look at Georgia can turkey invade Georgia of course if its not the aggressor – no because its now from the western world – same for Armenia if it was a western and it could be one – people in Armenia are ready and could be within 10 – 15 years – Turkey which is 20% civilized and the rest are barbaric could NOT dare to attack a western civilized country …

No, he does not dare , because the summer who dared ..got this.

The Armenian state is corrupt and is the enemy of the Armenian people they handed The Turks a victory in Karabakh …..if it wasn’t for the traitors we would be still fighting and killing Turks in the mountains of Karabakh! If the Turks don’t finish us off now they will regret it later because we will gather our strength and clean house ……once we got our own drone fleet the Azeris are going to be taught a real lesson: do not pak with the Armenians !! All of turkey and

The war in Karabakh is not over … prepare properly.

Russia intervened in Syrian conflict in 2015. Shortly thereafter, an infuriated NATO used its forward base against Syria – Turkey – who were instructed to take action to test and provoke Russia. Turkish F-16’s then ambushed a Russian Su-24 ground bomber, flying over north Syria, without Russian interceptor protection – it was downed near border with Russian pilot deaths. Russia was not impressed by such treachery. Thereafter Russia stationed a squadron of MiG-29’s in Armenia – directly at Turkey’s rear. Turkey is well aware of this – and limited in action against Armenia because of it.

Putin can’t be allied to a Soros state. The Armenian people, who put Pashinyan into power, should have thought about this before. And going to Nato, is going to be subservient to the Turks again. How did that one work out for the Armenians last time around?

Yes, because NATO is not controlled by the United States, but by the Khazar Bankers (Rothschild, Soros, etc.)

Soros Armenia declared itself to be an enemy of Russia its only military supporter, and Iran its only economic lifeline.

These missiles are useless if targets are not painted by drones. Same thing with Turkish artillery.

not at all,ground lightweight laser target designators and target locators can also paint , it has 1-2 m cep and can hit maneuvrable targets..

Ground laser target designator carried by a soldier, I was referring to Erdo’s comments about the missile’s correlation with Bayaktars drones. Smoke and aerosol clouds can minimize the effect of this method, tanks know they are laser illuminated.

Artillery and air defenses are far back from the front line defenses, in context of the Syrian war.

Yes we know …. and we have prepared properly. It will be a big party !! You can not imagine xa xa xa Only this time the WAR will be transferred inside Turkey.

Azerbaijan is weak and noob Army

By the way all of Turkey and Azerbaijan is ancient Armenian homeland! We have a duty to clean our lands from this Turkish infestation….send these nomads back to Mongolia…their home…..what have the Turks contributed to civilization? Nothing but bloodshed and falsification of history! They teach them fairytales in school …..shame of you ignorant bastards!

Bob
Reply to  you

In the ancient world, the entire coastal Eastern Mediterranean Sea was dominated by Hellenic Greece – from Athens all the way to Alexandria. NB – for any Turkboy-troll’s – that is why Cyprus is Greek.

what if Russia invades from Georgia?