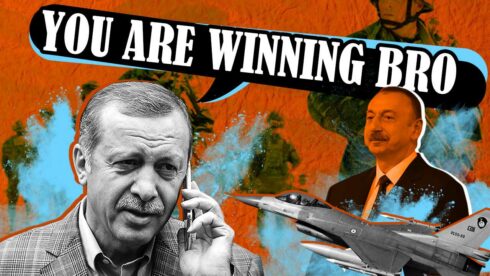 Iran and India opt for Armenia instead of Azerbaijan for regional connectivity project.

Azerbaijan, with the backing of Turkey and Syrian mercenaries, were the undisputed victors of the 2020 Nagorno-Karabakh War after reclaiming most of the territory from Armenian control. It was expected that with most of Nagorno-Karabakh under Baku’s control, new trade and transportation corridors would open and ensure that Azerbaijan became an indispensable connectivity hub in the Caucasus. Although there is a possibility for a trade corridor with Turkey to open and extend into the Turkic heartland of Central Asia, Azerbaijan’s hostile and aggressive posture has also meant that India and Iran are looking elsewhere to engage with Europe economically.

On Monday, a BBC journalist quoted the chairman of Iran’s Trade Promotion Organization, Alireza Peymanpak, as saying: “Two alternative Iran-Eurasia transit routes will replace Azerbaijan’s route. First opens in a month via Armenia after [the] end of repair work, and the second via sea by purchasing and renting vessels.”

Peymanpak was referencing the International North-South Transport Corridor (INSTC), a major economic project that is 7,200-km long and comprises of rail, road and water routes aimed at reducing travel time and costs. It will also boost trade between Russia, Iran, Central Asia, the Caucasus, India and Europe. Not only is this route 30% cheaper and 40% shorter than the current route, but it also serves as a geopolitical tool to further isolate Azerbaijan as its relationship with Iran and India deteriorates.

The original INSTC route runs through India, Iran, Azerbaijan and Russia. Baku made massive investments to improve their own local infrastructure to accommodate for the necessities of the INSTC, completing roads, railways, bridges and tunnels. However, despite their economic commitment to be a key player in the INSTC, Azerbaijan’s ideological guide has led to a cooling of relations with Iran and India.

Azerbaijan in recent times has become increasingly vocal in condemning India’s policies towards Kashmir in support of Pakistan. It is recalled that in January, the foreign ministers of Azerbaijan, Turkey and Pakistan issued a joint declaration to support each country’s respective ambitions in Nagorno-Karabakh, Cyprus and the Eastern Mediterranean, and Kashmir. Although their trilateral relations have always been strong, they have been conducting joint military exercises more regularly since the 2020 Nagorno-Karabakh War, including directly on the Iranian border. It could suggest that the alliance was emboldened by victory in Nagorno-Karabakh and could now be more willing to use war to achieve its goals.

Due to Baku’s overconfidence after last year’s victory, it has not hidden away from demanding more territory. Territorial demands are not just over the bulk of Armenia, but also Iran’s northwest Azeri-majority region. Although Tehran and Baku traditionally have cordial relations, the calling of greater territorial conquests and the blatant display of Israeli military equipment in Azerbaijani possession has broken trust, with war between the two countries seemingly not far away.

The Indian reaction to the Turkey-Azerbaijan-Pakistan trilateral nexus has been swift. As India is also an emerging economy with a huge market and potential, even ultra-conservative monarchist states like Saudi Arabia have significantly cut their funding to radical Islamist organizations in Pakistan to successfully find a balance with India. With the exception of Qatar, traditional jihadist financiers across the Arab States in the Persian Gulf have stopped money flows as they now prioritize developing their economies and modernizing infrastructure.

In this way, Pakistan is increasingly seen as more of nuisance because of its chronic insistence on exporting jihadists, an image that Arab states like Saudi Arabia and the United Arab Emirates are trying to break away from. With the Arab states less focussed on perceived global Islamic issues like Kashmir, it is unsurprising that trade with India has skyrocketed – trade between India and Saudi Arabia amounted to $33.09 billion in 2019-2020, whilst between Pakistan and Saudi Arabia it was only $1.7 billion in 2019.

Due to the increasing hostilities by the Turkey-Azerbaijan-Pakistan nexus, India and Iran announced that the INTSC from next month will begin running through Armenia instead of Azerbaijan to reach Russia. Baku believed that it could balance an aggressive foreign policy whilst being an indispensable state in connectivity projects. Instead, it finds itself increasingly isolated with no friends besides Turkey and Pakistan, and only cordial ties with Georgia and Russia.

With the Turkish lira once again breaking its record against the U.S. dollar on Monday, Turkey has extremely limited capacity to once again deal with another military front in the Caucasus, especially as it is seemingly preparing for a new operation against the Kurdish People’s Protection Units (YPG) in northern Syria. This effectively means that if Azerbaijan was to provoke another war in the region, it is unlikely that Turkey can offer the same support it did against the Armenians, especially if fighting against Iran.

None-the-less, due to the increasing instability instigated by Azerbaijan in the region, it is becoming an unreliable partner for countries to put trust in it to be a transportation-trade hub. In this way, Iran and India are now hinging on Armenia for regional connectivity as they aim to isolate Azerbaijan from such corridors. If the pan-Turkic corridor fails to materialize, Azerbaijan through its own actions turned its potential of being an indispensable transportation-trade hub to being isolated from ambitious regional projects aimed at improving connectivity – and this is to Armenia’s advantage as the two massive regional powers of Iran and India will more closely build relations with it.

The Azeris are ruled by kleptocrats but their people want something like the Fire Horse Clique, just like in Hearts of Iron 4.

Congratulations Azeri fools. Your ignorant decisions and groveling to turkish interests will be remembered by Russia, China, India & Iran for many decades.

The future of Azerbaijan unfortunately became a lot darker.

And what you gonna do?

Well, when you are geographically located in central Asia – and India, Iran, China and Russia opt to bypass you as a trade route, and ignore you as a future economic partner, you are totally f^cked.

Azeri sold their soul to talmudic zionists and donmeh turks…. now we shall see the consequences.. Armenia needs a strong leader to participate.. not globohomo Pashynian and his woke followers….hope he is deposed soon

Excellent report. Azerbaijan has no one to blame but themselves. Signing up to be a Turkey-NATO stalking horse against Armenia and Iran leaves them with no regional economic relations other than Turkey and Pakistan, meaning their hitched to two long term under performing economies.