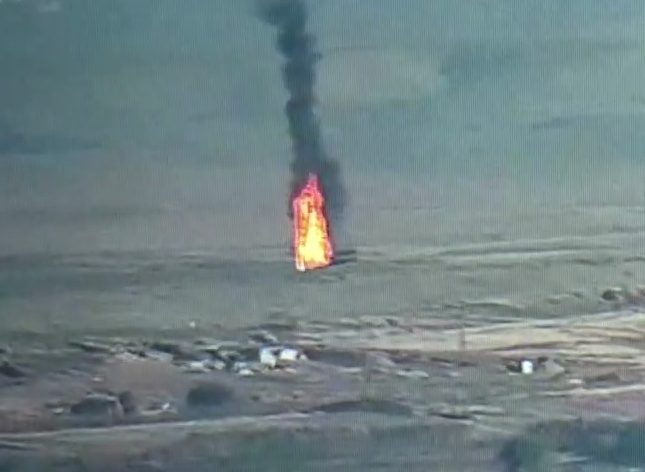 On the morning of October 13th, Azerbaijan accused Armenia of shelling the Tartar region.

[UPDATE] The information about keeping Aghjabed area under fire is also false. The Armenian side complies with the humanitarian ceasefire and is halting the offensive operations of Azerbaijan launched in violation of the ceasefire.

The Azerbaijan side continues pushing, any semblance of the ceasefire is gone.

The enemy is particularly active in the north-eastern part of the front line. The units of the Defense Army take adequate actions in all directions to silence the enemy's fire and thwart the latter's plans, keeping the operative-tactical situation under control.

A video was released purportedly showing the Armenian air defense destroying enemy UAVs presumably, even though it doesn’t become clear from the post.

Regardless, it is questionable that the Armenian ministry of defense would publish videos of its own stations being destroyed.

Destructions of Air Defense Units of Defense Army carried out on October 12 pic.twitter.com/9eDbjbP2cr

It is likely related to the AN-2 aircraft that was presumably downed.

On October 12, an enemy AN-2 aircraft used as a drone was hit in the eastern direction by the air defense of the Defense Army. pic.twitter.com/oLY7potv22

The Azerbaijani air force operates Su-25 fighter jets along the border with the air support of Turkish Air Force F-16 fighter jets, according to the Artsakh (Nagorno-Karabakh) authorities.

Air Defense units of Defense Army of Artsakh shot down one Su-25 attack aircraft in the north-eastern direction, according to reports.

In a very questionable and absurd accusation, Azerbaijan accused the Russian journalist Semyon Pegov, the author of the @WarGonzo project, who is in Artsakh, of illegally crossing the border of Azerbaijan, as well as anti-state calls and calls for terrorism.

Semyon Pegov has been reporting in video format all the military actions, that took place in the most dangerous spots in Artsakh.

According to the Artsakh authorities, 51 servicemen have died in repelling Azerbaijani attacks, not during the last few days, but since September 27th until October 12th.

This is only for Nagorno-Karabakh’s region; the Armenian side has lost 480 soldiers since September 27th.

Middle East expert Elizabeth Tsurkov published photos of Syrian mercenaries who fought against Armenians and were killed in action.

“Ibrahim Juma (in the circle) and Ahmad Lakhla from Rastan, Syria, were killed in battles in Azerbaijan. The photo of Ibrahim was taken in a hostel of Syrian mercenaries in Azerbaijan.

Their bodies, along with the bodies of about 50 more people, are to arrive at the Khivar Kilis checkpoint in 2 hours,” she wrote. 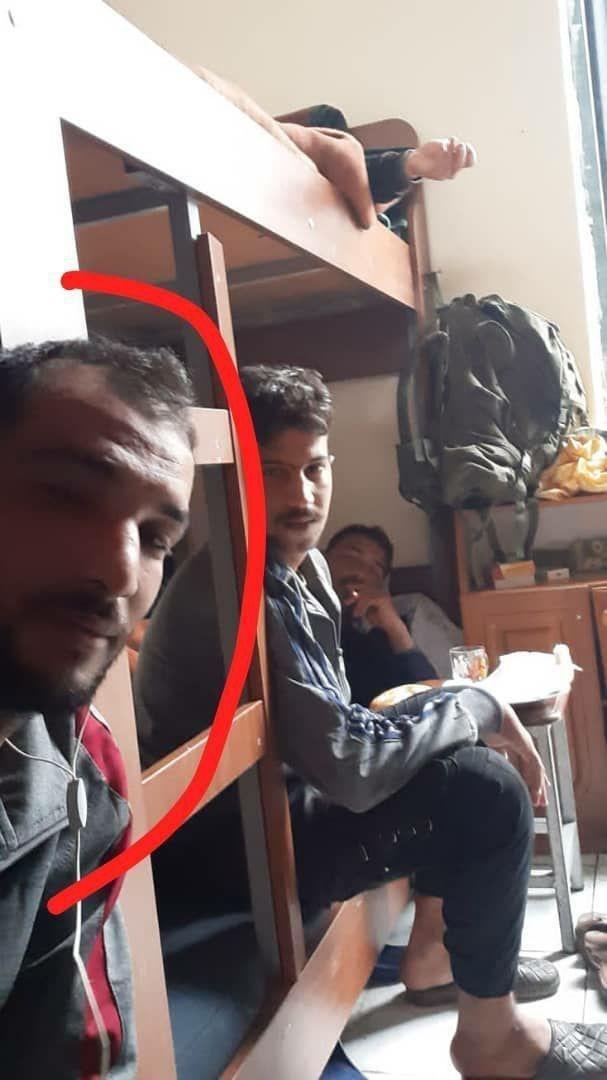 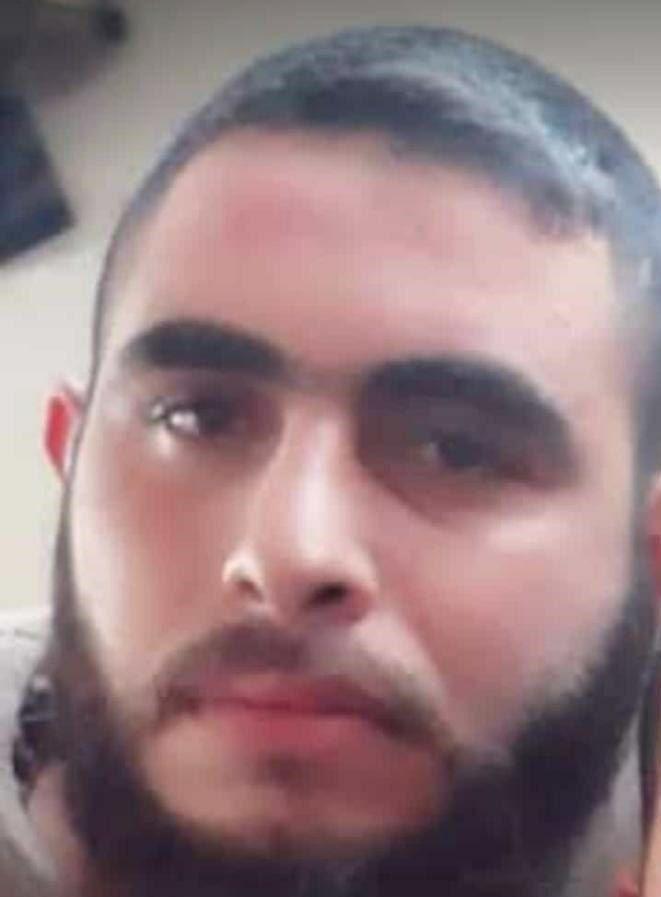 Armenian Prime Minister Nikol Pashinyan said that Nagorno-Karabakh was near a humanitarian crisis due to Azerbaijan’s offensive.

Pashinyan met with the ambassadors of foreign states. His main points:

Meanwhile, in some good news for Azerbaijan Israel’s Supreme Court rejected the claim to ban the sale of weapons to Azerbaijan, due to lack of evidence of war crimes against Armenia.

Likely in order to deny any responsibility, Azerbaijan’s Ministry of Defense is publishing videos showing empty spaces, which they’ve purportedly captured away from Armenia, since Armenia’s forces are nowhere to be seen.

You are so retarded, beyond words.

Khan not so great, has small brain and falls off horse. :)

Put it this way: Mumbla dumbla great khan no smart, hores fall down, dump he as shut. Imbecile he come.

We see the brotherhood of the nose in action: Israel+Turkey+Azerbaijan. One big happy family, all terrorists till the bone.

Operates within internationally recognized territories of Azerbaijan. No journalistic accreditation from Azerbaijani MFA and walks around in a military camo. Totally legit target to be eliminated as an enemy combatant. https://uploads.disquscdn.com/images/416e859c335d0f0d452d0465d950f3d8a4c4eb4f6a5e77f4147e1a39b0139e53.jpg

This fool look stupid, he need Harop on head. hahhaa

It’s unrelated to this article, but I wanted to thank Aliyev for giving us a Harop!

It was crashed in Pars Abad

Link to article in Persian on FarsNews

I think Iran already has that technology since Houthis bypased all the Saudis defence to strike their large oil and gas facilities.

You are illiterate idiot.

BAKU, October 12. /TASS/. Azerbaijani Prosecutor-General’s Office has opened a criminal case against Russian blogger Semyon Pegov for illegally visiting Nagorno-Karabakh. “Investigation has found that Russian citizen Semyon Pegov entered into criminal collusion with a number of persons in Armenia and in the occupied territories of Azerbaijan in violation of the law On the State Border of the Azerbaijani Republic and the country’s Migration Code and illegally visited the city of Khankendi (Stepanakert – TASS) and other occupied communities illegally, without the necessary documents and bypassing the border checkpoints, in other words, through the territory of Armenia… Azerbaijan’s Prosecutor-General has opened a criminal case over the incident. The PGO’s Investigative Directorate has been instructed to probe into the incident,” the news release runs. The news release also claims that Pegov on his page in the Internet published “content with calls addressed to Russian citizens to go to the area of combat operations to provide assistance to Armenia” and “calls aimed against the territorial integrity of Azerbaijan.” The news release says that the criminal proceedings were launched under articles 214.2 (public calls for terrorism), 281.1 (public calls aimed against the state) and 318.2 (illegal crossing of Azerbaijan’s border) of Azerbaijan’s Criminal Code.

Wonder if they have the guts to do the same with the French or other Western journalists.

Join army, we have potatoes :)

Wow! Soldiers eating foodstuff! And is it used as props? Who said they weren’t? Nothing is more telling.