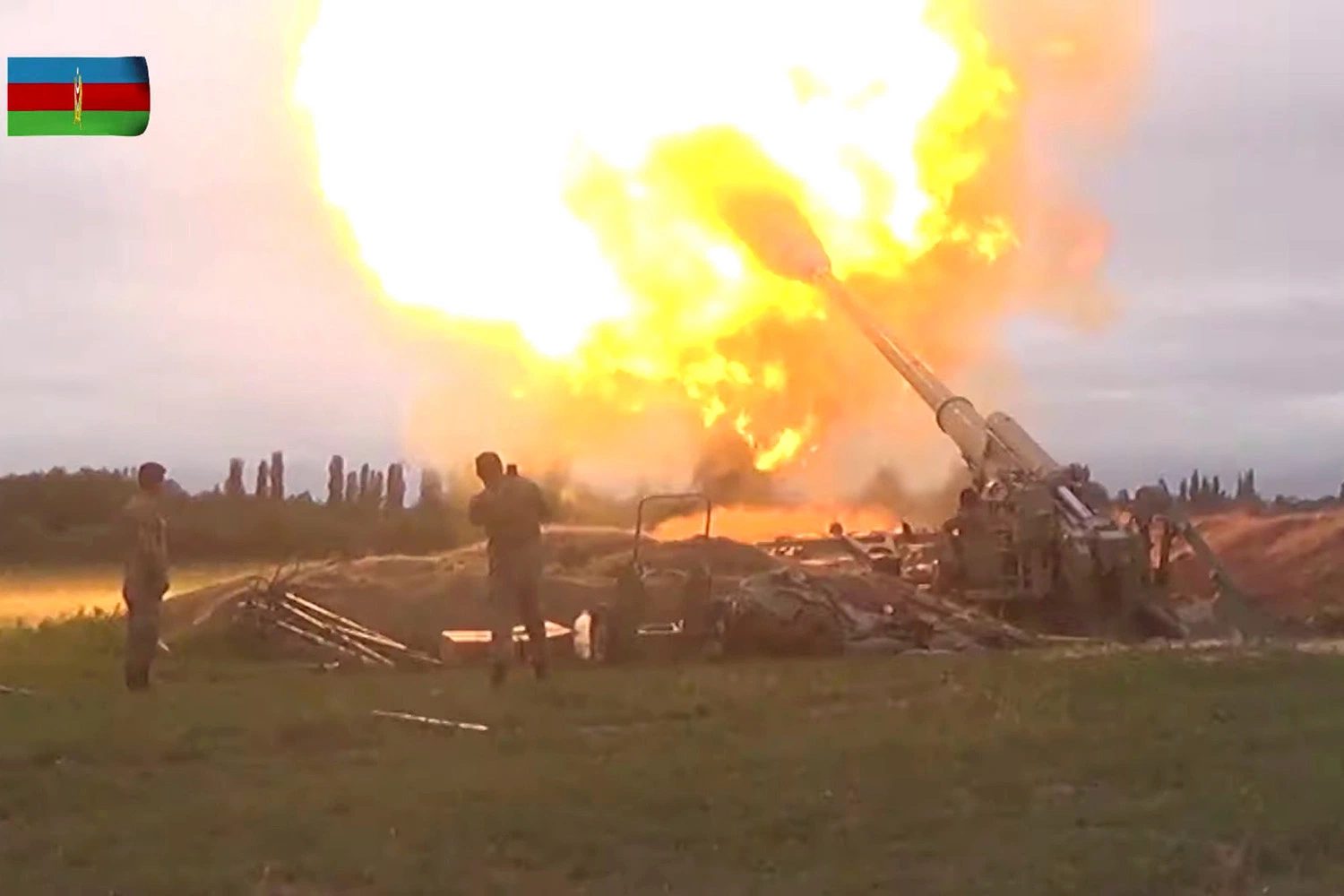 On October 2nd, Azerbaijani forces allegedly attacked a hydropower in the north of Armenia’s Kashatagh region.

This goes in violation of customary international law principles, which are reflected in Articles 48 and 52 of Protocol I additional to the Geneva Conventions.

Another video was released showing Azerbaijani shelling on the city of Stepanakert.

The air defense of the Artsakh Armed Forces hit the enemy aircraft in the southern direction at 12:15, and in the northern direction in the period from 12:07 to 12:10, two drones.

Battles are being fought in different directions of the front, manpower and armored vehicles of the enemy, in particular tanks, have been destroyed, said Ministry of Defense spokesperson Shushan Stepanyan. 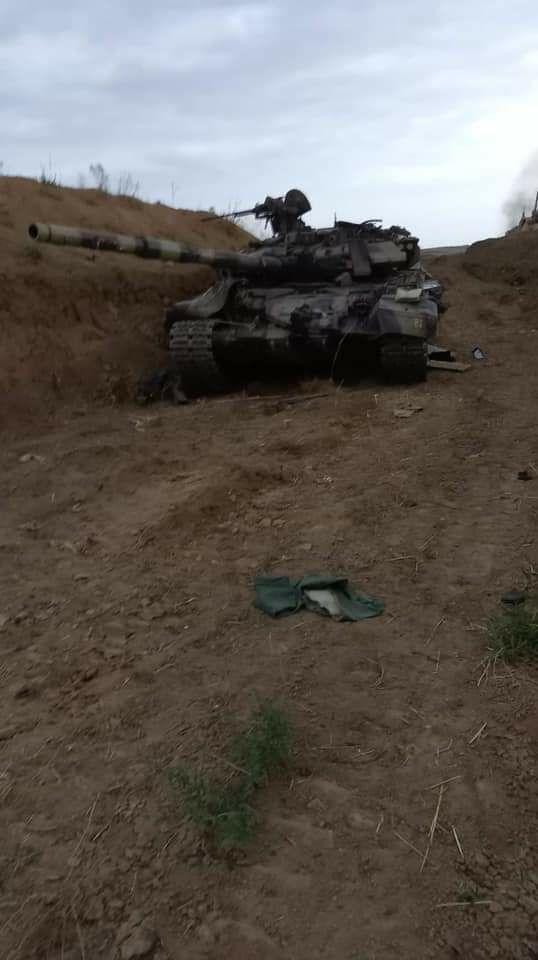 Meanwhile, there appears to be no end in sight, various countries called to a ceasefire and an end to hostilities, but both Armenia and Azerbaijan have refused such a course of action.

Moscow said Russian President Vladimir Putin and his French counterpart Emmanuel Macron had called for a “complete” halt to fighting in Karabakh and said they were ready to intensify diplomatic efforts to help solve the conflict.

“Vladimir Putin and Emmanuel Macron called on the warring sides to halt fire completely and as soon as possible, de-escalate tensions and show maximum restraint,” the Kremlin said.

In a telephone call, the two leaders expressed “readiness” to see a statement made on behalf of the co-chairs of the Minsk Group — Russia, France and the US — that would call for an “immediate” end to fighting and start of talks, it added.

In separate phone conversations with his counterparts from both ex-Soviet countries, Russian Foreign Minister Sergei Lavrov reaffirmed Moscow’s “readiness” to organise a meeting.

But neither leader showed signs of being ready for talks.

If “the Armenian government fulfils the demand, fighting and bloodshed will end, and peace will be established in the region,” he said while visiting wounded soldiers.

Armenian Prime Minister Nikol Pashinyan said it was not “very appropriate” to speak of negotiations “at a time of intensive hostilities”.

In the Armenian capital Yerevan, dozens of men gathered outside a recruitment office to join the fight.

“We must act to defend our homeland against the aggressor,” said Kamo, a 32-year-old factory worker. “This is our land. We will die before we abandon it.”

There are worries that the war could escalate to be even more all-encompassing.

“We are definitely very close to seeing a large-scale war, possibly even on a regional scale,” said Olesya Vartanyan of the International Crisis Group.

Karabakh’s declaration of independence from Azerbaijan sparked a war in the early 1990s that claimed 30,000 lives, but it is still not recognised as independent by any country, including Armenia.

“An Azerbaijan T-90S battle tank was also captured.” It seem fuked as well…. I find a good video, we know most of….but still. https://www.youtube.com/watch?v=Hny0IhZJnDQ

What are you on about bud? Are talking about the video? in the video it said Russia won’t interfere with Azer-Arm (NK). I don’t really care about Azer nor do I care about Arm, it is not something in your control or mine and no matter what we say, it wouldn’t matter. Why are you so butthurt, did your father died? Still what are you on about? “You want peaceful settlement when you occupy 25% of Azerbaijan territory?” No kill each others I watch, I like wars. ” When you did not want peaceful settlement back in 1988?” I would say war is the way but less BS and more video :).

They must have lost the war if they lost T90

If Nagronoka Karabach must lose its independence so must Turkish Cyprus. But this is obvious to rational and balanced for lose canon and ego-centrist Tooman thinkng of Sultan Erdogan

It is totally different. Cyprus was an independent country. But its military government wanted to merge with Greece and the Turkish North minority did not agree. Turkey would never allow Cyprus to merge with Greece. That would be a change of status quo and annexation.

Ask yourself why the “armenian rats” wanted to change the status quo. Is it clear that NK is full of armenians? And it was Armenia before another ( I say another, because there is that idiot Krushev who annexed Crimea to Ukraine ) soviet dictator assigned it to Azerbaijan.

International law states that people have a right at self-determination.

If kosovars had the right to choose to secede from Serbia, why NK didn’t have the same privilege?

So N-K citizens witch are overwhelming majority Armenians want independence and merge with Armenia are not permitted to do so but “turkocypriots” who are a minority in Cyprus could tear a country to pieces and merge with Turkey. Ok whatever,reason being absent there’s no need to converse.

Go read little history, before you talk. First in NK is 80% Armenians, second if Kosovo departed from Serbia and turkey acknowledged independence of Kosovo. Turkey can’t read international law just how it suits her. Third N-K always been populated by Armenians since Christ time, last 2000years. There at karabach was middle age Armenian kings residence. Until 8 century. Even if the Azeri with Turks tried to make ethnic cleansing Karabach is still dominant Armenian. So Azerbaijani have a lot of land and shouldn’t be that greedy. Plus when in 1920. Azeri burned many Armenian villages, and then came the Bolsheviks in 1920-21 and the flight stopped. Stalin promised that will return Karabach and nachichkevan to Armenia. But because Stalin was hoping turkey to become communist and for that reason left Krabach in Azerbaijan. Turkey never became communist. And Stalin forgot for his promise which made today clashes and war possible.

Men, did you read your own nonsense? You just confirmed my point, you can everywhere swap muslin Cypriot with Armenian and cyprus by Nagorna karabach. And likeErin says the same for Serbia and Kosovo. You should tray to think and inform you independent and not believe liars as Erdogan.

Isn’t striking hydro-power plant a war crime?? Is it not a civilian/humanitarian installation??

This is Armenian desperate propaganda….

NO, YOU are the desperate turko – troll here.

Hey, don’t mock a brave turkroach keyboard warrior! He is on duty 24/24 on this forum ( and who knows how many others ).

I know how many others, have a look :

The Objective
Reply to  ©igare☘☘e?Sm⚽️k?ng?Man️?

You seem to see Turks everywhere. Anyone who has a different opinion than you is either a Turk or a western agent.

Unless its your own hydro-plant, then its just reconstruction

Its the US and NATO doctrine to bomb civilian targets and civilians themselves.

true, and spreading cholera as they did in Haiti

If the Azeris prevail there will be a genocide of Christian Armenians. Butchery is in the Azeri blood.

Genocide of Armenians is in Turks blood. It is Erdogan`s blood thirst.

I hope somebody bombs the pipe lines the gas and oil that are just about 10 kms from where the fighting is. No turkoazeri dirty money to fund their wars no more. Well… apart from Merkel’s gifts to Erdogan that is.

Azerbaijan seems to have shifted strategies to a long war. Foreign journalists as well as chargeable batteries become more important in this phase.

©igare☘☘e?Sm⚽️k?ng?Man️?
Reply to  Assad must stay

All in good time. For the moment the aggressor cant accomplish any goals in the battlefield. They are losing equipment and they are losing their mercenary turkisis cockroaches. As long as Armenia can defend like that the more the turkoazeris will get desperate and do more stupid things, this is a one way street kinda war, its just too soon in the propaganda fog to see it all clear.

But I thing Azerbaijan is getting more brazen sending a done to Yerevan. I don’t think it is wise to let this action go unanswered!

Assad must stay
Reply to  ©igare☘☘e?Sm⚽️k?ng?Man️?

©igare☘☘e?Sm⚽️k?ng?Man️?
Reply to  Assad must stay

not much to step up with though

I beg to differ

my bad, you can’t show anything. could cheer for your compatriots in karabakh war though

and what will change in the battlefield?

Iskander hit on Baku will evaporate Azerbaijani troops in the line of contact?

Itll wipe out their chain of command and leadership, even better

So if Minister and chief of staff are gone, generals on the field cannot order the troops?

I v got something to show you turkisis troll :

with the new pro-western democratized and coloured anti-russian stance of the wise armenian leadership what could go wrong? suckers in the picture attached, Yerevan is not a large city – anyone can interview now the proud ladies holding the banner “russian occupation of Armenia” https://gakg5sv2p13fjr0q1hulkabr-wpengine.netdna-ssl.com/wp-content/uploads/2016/04/YEREVAN-ANTI-RUSSIA-PROTEST-PANARMENIAN-PHOTO2.jpg

You forgot the video where Armenians loaded a truck full of Azeri bodies, still in their uniforms. That was from yesterday too. Armenians never said they want a ceasefire or negotiate, that is propaganda. Losses are getting heavier on both sides. However, this fight has been Artsakh vs Azeris and Turks so far, Armenia proper hasn’t been properly involved.

turkeys are losing in Syria, Libya and now Armenia; they can instigate but they are too incompetent to ethnically cleanse arteshk

It’s widely reported Armenia is seeking dialogue, maybe that doesn’t include the Nagorno-Karabakh contingent, meanwhile the penality is getting closer for Azerbaijan.