On October 25, Armenia and Azerbaijan reached another humanitarian ceasefire deal, this time in Washington. The ceasefire will take effect at 08:00 a.m. local time (12:00 a.m. EDT) on October 26.

“Armenian Foreign Minister Zohrab Mnatsakanyan and Azerbaijani Foreign Minister Jeyhun Bayramov met with Deputy Secretary of State Stephen E. Biegun on October 24, 2020 and reaffirmed their countries’ commitment to implement and abide by the humanitarian ceasefire agreed in Moscow on October 10, which were reaffirmed in the statement issued from Paris on October 17, in accordance with the October 1, 2020 joint statement of United States President Donald J. Trump, French President Emmanuel Macron, and Russian President Vladimir Putin.  The humanitarian ceasefire will take effect at 08:00 a.m. local time (12:00 a.m. EDT) on October 26, 2020.  The United States facilitated intensive negotiations among the Foreign Ministers and the Minsk Group Co-Chairs to move Armenia and Azerbaijan closer to a peaceful resolution of the Nagorno-Karabakh conflict,” the US State Department statement reads.

The deal was reached amid intense clashes in the Nagorno-Karabakh region between Armenian and Azerbaijani forces and it does not seem that the Turkish-Azerbaijani bloc is really interested in the de-escalation of the situation as Ankara and Baku believe that they are on the brink of the victory.

The Iranian leadership is also skeptical regarding the diplomatic settlement of the conflict. Iran deployed large forces to the border with Karabakh and launched large-scale military drills in the area.

Chabad Putin shows his true colors again. I’m sure Putin the snake knows Afghanistan was attacked under obvious false pretenses. I guess the tens of thousands of dead Afghanis were beneficial to Russia also, right Putin you little weasel ?

Well, they kept the Taliban busy for a while, Russia politically supported Bush intervention in Afghanistan. They offered logistical support from Central Asia bases. Some sources even said Russian special units helped Americans in the first days of invasion but I can’t say true or false.

Both Putin and Melania Chabad, that’s why Trump much friendship :)

We own the world, get used to it.

Putin is one of ours. 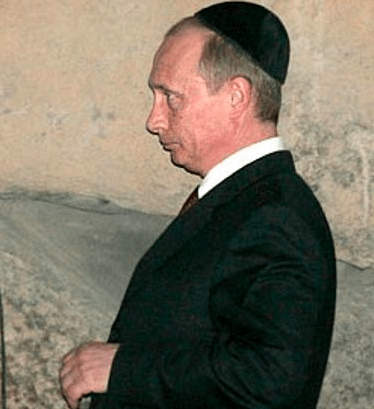 It is like another ceasefire reached in Syria. It gives both sides time to bury their deads and replenish their supplies. The death tools on both sides must be unbearable. Particularly the Artskin civilians who chose not to flee, but stayed to wait for the news of their men.

And Artskins can’t even get more supplies to come. But the ceasefire gives the Artskin some time to flee. Or dig more trenches for another fight.

The Armenian sacrilegious pigs must be defeated. The Khazar brotherhood must prevail against infidels.

You can’t win God. Your fiesta will end soon. Which one are you among these three? https://www.youtube.com/watch?v=MDEDnpn-S_s

Trump just need to show votes that he also is doing something about this conflict. I bet it will not last 24hours.

We must defeat the Armenian pigs once and for all. Mazal Tov! All people must support the righteous Azerbaijan cause against Armenian sacrilegious putz..

If all the world will fight against you there is no chance for your “victory”. Remember nazi hitler? You will end up like him.

Another paid for Turkish troll pretending to be Jewish and everyone on SF falls for it, that’s so sad.

You better use “AZERBAIJAN LANDS UNDER ARMENIAN OCCUPATION”, instead of “Area Controlled and Claimed by Arshak” as the United Nations has repeatedly condemned.