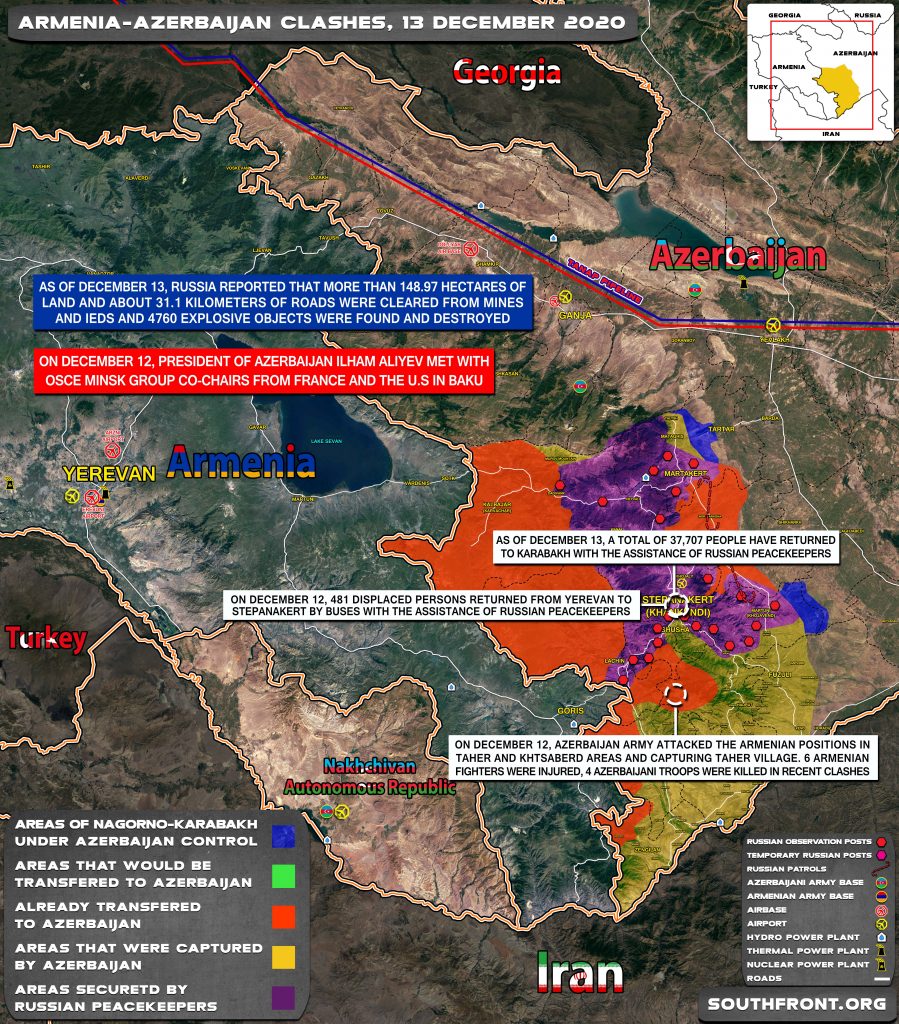 On December 13, the Azerbaijani Defense Ministry and the State Security Service (SSS) declared that Azerbaijani forces have carried out a “forced anti-terrorist operation” in the vicinity of the town of Hadrut in the south of Nagorno-Karabakh.

“After the signing of a joint ceasefire statement on November 10, Armenian armed units remained in the forests north-west of the town of Hadrut. The Armenian side appealed to the command of the Russian peacekeeping contingent to assist in the withdrawal of these units,” the statement claimed.

However, Azerbaijani claimed, Armenian units “did not leave the territory, but, on the contrary, set up combat positions and carried out several acts of sabotage against the Azerbaijani military and civilians, as a result of which four soldiers were killed and two were wounded, as well as one civilian was wounded.”

Azerbaijan called on Armenia to ensure the implementation of the points of the joint ceasefire statement in Karabakh.

“The Republic of Azerbaijan is committed to the implementation of the points reflected in the joint statement of the leaders of the three countries, and continues to closely cooperate with the peacekeeping forces of the Russian Federation to ensure peace in the region,” the statement said.

Contrary to the Azerbaijani version of events, Armenian sources insist that Baku forces deployed reinforcements and attacked positions of Armenian local militia in the countryside of Hadrut.

For example, on December 12, Azerbaijani troops entered the village Khtsaberd and attacked the village of Khin Taher, which were in the hands of Armenian militia units. On December 13, Armenia claimed that Azerbaijan attacked the villages of Hin Shen and Mets Shen. All these villages are located in the de-facto encirclement by Azerbaijani troops and Armenian units located there are ‘volunteer battalions’ and ‘local militias’ that have refused to withdraw from the encirclement following the November 10 agreement. Their shady status became the source of the current tensions in the region.

In other news, Russia (in collusion with president Pashinyan) commits another act of terrorism towards Armenia by preparing the groundwork for the annexation of more Armenian territories by Azerbaijan and Turkey. Same as in the Bolsheviks’, Lenin’s and Stalin’s days, Russia is “gifting” the southern half of Armenia proper this time, to the Turks: https://asbarez.com/199084/moscow-wants-link-between-nakhichevan-and-baku-through-armenia/?fbclid=IwAR0UvJHB7_nIltqTgseqsbPKeFEAavatlVBcFaAlZWRdHmftH4VA39b9UKI

No future in fascism nor the lgbtq,indeed stalin saved far more lives than incest/hitler wasted:

So who killed more Christian Russians? The Jewish Bolsheviks or the Georgian Stalin?

Well, I guess you never heard of Seda Sayan ?. Very huge star in Turkey since the 1990s and still a household name today, and quite frankly I think she’s gorgeous.

I may be a 30-year-old Hungarian, but I know my entertainment well, haha ?.

Lots of nice looking Turkish women who carry the genes of the beautiful Greek and Armenian women the Turks have been raping for a thousand years.

“Will of the woman” is a relatively new concept. Throughout the history, in all parts of the world, most of the women either raped or chose their partners based on very pragmatic reasons, or mostly that decision was not theirs at all, are being treated as if they are an object even by their own kin.

I think, only barbarians and nomads treated them equally. Because their survival depended on ultimate cooperation.

This doesn’t make it right and doesn’t justify genocide by rape. Today 90 percent of Turks don’t have slanted eyes because they are the descendants of countless millions of Christian women that they raped and enslaved throughout the centuries.

Turks and Greeks have almost the same genetic prototype because they’re the same nation indeed The largest autosomal study of Turkish genetics concluded that Central Asian legacy to the Turkish people is estimated to be 21.7% https://en.wikipedia.org/wiki/Genetic_studies_on_Turkish_people It means number of Turks which came from Central Asia were small but they were very organized and had great warrior skills and tactics for that era, so that they won wars against Byzantines They took control over Anatolia The Byzantine/Roman people who accepted Islam were named as Turks (by Europeans), others who resisted and protected their religion (Christianity) were named as Rums (which is synonym of Romans)

Who said it justifies? It was just how the world worked. But you are dramatizing this a lot. Almost every group of men brought death and rape to the conquered territories. We started to act “civilized” in last a few centuries, it seems that this created an illusion. Because of that, some people seem to forget how human nature is. Even in this century, we can write the list of the savagery of humankind and it would take pages. For instance, do you know how many German women raped by Soviet soldiers? Again, I am not justifying those things at all, but most people still seem to not be able to control their savage instincts. You are just using “Turks genocided and raped” rhetoric because… you simply don’t like us. I don’t expect you to like me or other Turks, but enough… stop spamming the same thing again again and again.

About the second thing, you said. You may think that Anatolia was populated by solely Greeks, Armenians and Kurds before the arrival of Turks. If you believe this, you are wrong. Greeks inhabited very west (and some northern) parts of Anatolia, Armenians inhabited the eastern parts and Kurds were not in Anatolia at all. Indigenous Anatolians (Indo-European folk with some mixture of non-Indo European elements, they were genetically quite close to Greeks) lived in Anatolia, not Greeks or Armenians. Most people not even aware of them because they were not able to establish any kind of proper power in the region after the fall of Hittites. Greeks came over them they are Hellenized, Persians came over them they are Persianized, Romans came over them they are Romanized. Finally, Turks came and they are Turkified. So that’s why most of us don’t have slanted eyes. See how it worked and understand why I said you are dramatizing? In fact, I think your hatred to us roots for one single reason, we are not Christians.

You are not honest, Turk.

None of the peoples you mentioned exterminated the entire population of Anatolia and stole the genes and the lands of the previous inhabitants of these lands.

Only you did that. That’s why you Turks are an abomination that’s incompatible with the rest of the human race, not just because you are Moslems. But because Turks are monsters. You Turks yourselves claim that Turks can only have Turks as friends; all other peoples are your enemies. You cannot deny this, it’s a fact.

You are the most disgusting thing in this world. You have no honor at all. Everyone knows what you did yet you claim that Turks bring peace and prosperity everywhere they go. Monster, Look what you did to Constantinople. You turned it into an overcrowded concrete hell where hundreds of thousands of people will die when the next major earthquake hits. Look what you did to Anatolia. These fertile lands were self-sufficient in food production. Now you buy your meat from Serbia, your cotton from Greece and your lentils from Canada. On top of that, you confiscate your farmers’ tractors whom you’ve bankrupted by making it impossible for them to sell their products at fair prices. You Turks are like the wolves you say that you are. You can only kill and rape. You can’t work and conduct yourselves in civilized fashion. Now that you killed all the Greeks and Armenians, you are turning on each other, exploiting, oppressing and soon to be killing each other. The only thing you are doing presently is to make terror drones and roads and bridges that the average Turk cannot even use because the tolls are too expensive. Turks, You will now tear each other apart. And the rest of the world, we will watch.

So giving historical facts is equal to being dishonest in your eyes okay.

“None of the peoples you mentioned exterminated the entire population of Anatolia and stole the genes and the lands of the previous inhabitants of these lands.”

Find the contradiction in this sentence and then, maybe you can understand what I am trying to tell.

Oh moreover, only thing you have “savage Turks” rhetoric. But you can’t refute the historical facts I have. You directly spammed again without touching even just a little bit to them. Someone was talking about rational discourse? Yes, indeed that was very rational comment full of intellect.

I can’t help you further.

Quite strange to see a Hungarian posting this lol

look behind you. cu… nt https://media2.giphy.com/media/L1Od98DBATqATlZoUs/giphy.gif

Very Turkish “reply.” Agreed. Turks are incapable of rational discourse. You can only shout, rape, torture. And kill.

I will watch you destroy yourselves, Turk. Minimum wage in Turkey now below 300 USD and almost all non-AKP youth unemployed.

How do you say civil war in Turkish?

I think I gave you a quite rational discourse, but you didn’t even bother to reply lol

As I observed, you usually do not bother to be in a rational discussion at all. All of your comments are rage, insults and repeating the same stuff. In other words… trolling.

He is a bigot greeek troll He had a greeek pfp and he was swearing to Russians all the time, then some Greeks warned him to change it, he obeyed and decided to become an Armenian xD It’s meaningless to discuss with him, he is mentally sick This was my first and the last reply to him

Could be a greek, but he has an Armenian name. But I also remember he was cursing to Armenians too. Confusing…

There are two things I am sure about him though, 1) He lives in west and he has no life in there. 2) He is mentally ill, you are right. I am not even mocking him. I truly believe something is wrong with him.

So you have two handles? The poster “Mustafa Mehmet” is you as well? That’s who I was responding to.

You are responding to him, but you said “Turks are incapable of rational discourse” that’s why I wrote.

In other news.indeed, your sorosist armenian prime minister is a hero. Azerbaidjan hero

Putin now likes Pashinyan a lot. Putin wants Pashinyan to stay in power. So I guess your Jewish hero Putin works for Soros as well? http://aanirfan.blogspot.com/2018/02/trump-putin-kosher-nostra.html?m=1

I dont think that Russia wants to gift territory to AZ…they try to avoid a conflict and preserve some provinces of NK under Armenian hands….but surely there are some forces inside Armenia that want to keep somekind of resistence and even guerrilla war…in fact the best way that Pashinyan can avoid to resign is some armed resistence that could have receive support of western countries such as France, Canadá and Greece…

I say that Pashinyan refused to help NK using air force beside send more TOR M2 system and not only a single system!…and I say that now Pashinyan needs( by recommendation of his western partners) some resistence vs AZ…otherwise sooner or later he and all the Soros NGO will have to flee from Armenia!

But so is Russia.

Armenia is finished. Finally destroyed by Russia’s perfidy and contempt. No land connection between NK and Iran = no Armenia. Within half a century, no more Armenia.

But Russia fucked itself as well. Russians, be prepared to lead your miserable existences as the bitches of the Muslims and the Jews that already are your masters, whether you know it or not.

That isn’t in Russia’s interest at all, never mind Putin, think before you speak Russophobe

Yes, it isn’t and that is my point. Putin is a Jew and he’s a traitor to Russia: http://aanirfan.blogspot.com/2018/02/trump-putin-kosher-nostra.html?m=1

If Putin is a Jew, how is Russia doing so well in the past 20 years, look at poverty, life expectancy, etc..