Ayesha to her people: I will avenge my father, brothers, a husband and Libya! 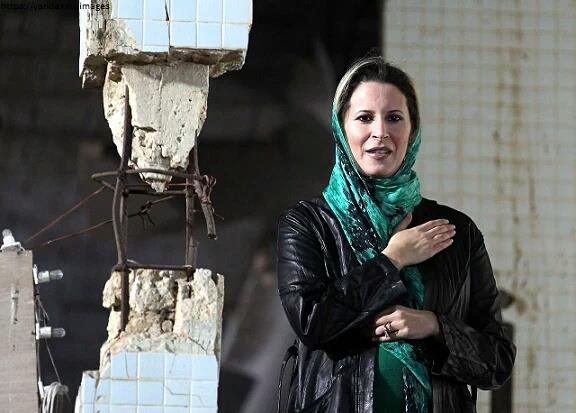 She is back! The daughter of Muammar Gaddafi will lead the resistance against NATO and the other Libyan terrorists. Ayesha stated that she is now the leader of the resistance and she is about to create a new secret government.

Ayesha Gaddafi become the new leader of the resistance at a crucial moment for the country – on the eve of the new NATO intervention. As a Lieutenant General of the Libyan army she swore loyalty to order her legendary father and urged Libyans to wake up in order to win, to be successful and to “return the Jamahiriya government”.

Ayesha Gaddafi guarantees that in the next few months she will form a “secret government” of “famous Libyans,” who are loyal to Gaddafi and that will act as a mediator in Libya and abroad. Analyzing the current situation she criticized the former army because of “a crazy mix of anarchists” who decided to wage war on a principle “I fight for whoever pays me more.”

Ayesha Gaddafi called on the soldiers of the Libyan armed forces to give her the oath as a Supreme Commander, in order to restore the state.

“My name gives me a duty and a right to be at the forefront of this battle.”, said a brave woman who during the war lost her husband and two children. Today she is ready to become a “symbol of the nation” and alongside a portrait of Gaddafi to become a “symbol of the mission to restore national unity.” Speaking of the Libyans as for her children, she compared herself to a mother who will fight for their children.

She also talked about about al-Qaeda terrorists, who overthrew her father Muammar Gaddafi in 2011. Ayesha Gaddafi prophetically said that their destruction and death have a breath of madness and that it will fall apart and disappear. She wrote that “We are ready for a deadly battle” in which the terrorists will face one nation. In conclusion, she promised to sign s new agreement.

According to rumors, the printed version of this call is secretly being distributed and shared in the main cities of Libya – Tripoli and Tobruk. And according to given information we can also expect her speech on local television soon.

Her analysis is certainly correct. Especially the part about the hired mercenary killers.

Ayesha Gaddafi has risen out of the ashes. Glory, there is a God!

Sertainly she won’t have any problem gaining world oppinion on her side since it should be obvious to all that NATO f*ckDup.

May God be with her. Ayesha Gaddafi will have the blessings of many people.

There is no god ,Fools !

The legions waiting to get their theology from the tangential ejaculations of “Ugly Hookers” in a pro-Gaddafi comments section can now rest easy; the day has come.

and you know that how? just curious

She has to make it. A heavy asymmetric revenge on NATO=USA.

Not to likely that she will get even with the bankers, who design horrendous events. https://www.youtube.com/watch?feature=player_detailpage&v=XuzkLbHb1Q8#t=42

GADDAFI MAKES MISTAKES!HE DID NOT TRUST HIS OWN PEOPLE!HE SHOULD HAVE SURRENDERED POWER EARLY VIA POPULAR DEMOCRACY WHILE IN POWER!HIS LEARNED CHILDREN FAILED TO ADVISE THEIR FATHER TO MAKE SUCH A TRANSITION EARLY!HIS POLICIES AND VISIONS ARE GOOD!HE OPEN HIS COUNTRY TO THE WEST VIA CONNIVING TONY BLAIR WAS A BIG MISTAKE!HE SHOULD HAVE MADE PUTIN HIS FRIEND AND HAVE RUSSIAN NAVAL BASE IN LIBYA! HE SHOULD TRUST HIS PEOPLE FOR PROTECTION AND NOT FOREIGN MERCENARIES!

Ayesha should get Russia ‘s help to help fight NATO and Libyan terrorist!Its sad despite her tenacity they themselves should shoulder the blame for failing to advise their visionary father against collaborating with the West!FUTURE LIBYA IS SAFER IN BRICS ORBIT!

Yeah i deal with you because when nato fighting with isis , militant and rebels in iraq is get small ocupied than russian just a few month i can destroy and back some refuges Nato in some country just for an oil not a peace

Interesting interview – and a “inbetween” view of Gaddafi. But my question about Gaddafi – as to Castro, Kim in North Korea, Leaders now in brazil under attack. And as said by Che to Castro – based on Guatemala, Chile, Argentina, Venezuela PLUS a lot of valuable resources OIL – you cannot have a well functioned democracy because USA in particularly but also France and UK – WILL corrupt it, will overtrow their government, will infiltrate universities, will corrupt or buying up newsmedia. So how to run – nowadays – a country that freely will allow themselves to say NO to Nato no to USA – You need a dictatorship that have to control the nation harder – or having the atomic bomb, or close connection to Russia or China. US is the enemy to FREE democracy, actually !!

We need a transformation in the US. The young people appear to be much more progressive. The alternative media may be used much more by young than old. Perhaps we will elect Bernie Sanders, perhaps his VP will be unshakeable as well, so that if they try to bump him off – it wont matter. Perhaps he will tear the CIA up and scatter it to the winds, as JFK threatened to do. (The intervenionist part, not the analyst part, which should be restarted under a completely new department as a break with the past. Perhaps Varoufakis will get his federal europe. Perhaps we can get the real SuperPredators. Invasion Capitalism “To Heel”

Says the daughter of the biggest terrorist,,, oh well dreams are free a spouse

I doubt you are Libyan. A Libyan would know he was definitely no terrorist.

This was an interesting talk about how Gadaffi was on his way out with the Libyan people, and then due to Nato intervention became a hero to them. https://www.youtube.com/watch?v=8sbg11ER8yk

Interesting interview – and a “inbetween” view of Gaddafi. But my question about Gaddafi – as to Castro, Kim in North Korea, Leaders now in brazil under attack. And as said by Che to Castro – based on Guatemala, Chile, Argentina, Venezuela PLUS a lot of valuable resources OIL – you cannot have a well functioned democracy because USA in particularly but also France and UK – WILL corrupt it, will overtrow their government, will infiltrate universities, will corrupt or buying up newsmedia. So how to run – nowadays – a country that freely will allow themselves to say NO to Nato no to USA – You need a dictatorship that have to control the nation harder – or having the atomic bomb, or close connection to Russia or China. US is the enemy to FREE democracy, actually !!

Hope she is successful, a gold backed currency and greening of the desert with primary water, but be careful the bankers are evil bastards.

I guess this explains why NATO is planing another invasion of Libya.

I am glad to see this. I believe it was wrong to overthrow her father.

Look at her eyes, her hand on her heart – determination and flaming eyes. She is pregnant isen’t she? This is a moment of truth .. and yes as you say ingimundar a moment of glory and victory.

Good luck brave girl! But dont give me any shit about Allah or any other fucked up gods! Fight those corrupted forces that brougt your father Gaddafi down, and that includes the country i was born in: Norway. But be aware: Norway is part of NATO, not the Norwegians…I wish you justice and good luck!

Hope bless russian help her too

Best wishes to her and her cause, Muammar Gaddafi was a saint

Why have i heard this before<_<

Go Aisha go! You’ll have the full support of the Libyan people and of those all around the world who want the best for Libya!

We learned from Libya’s example what was in store for Syria! I hope you succeed in bringing back Libya to a safe harbor @AYESHAGADDAFI http://www.peacemessenger.net Peace Salam Shalom!

Where is proof of this? Aisha was in Oman. This would likely create reprisal. How do we know this is not a rumour?

Wonderful, brave lady – truly a credit to her father. Good luck Ayesha, many of us in the west hope that you win back your country.

what does his father did to Libyan Citizens? Accomplishments i mean when he is there being a President?