This article was originally published by Yevdokia “Dunya” Sheremetyeva at her blog here, and was translated from Russian by J.Hawk

Even if all the combat operations were to stop today, all the weapons were to vanish, and peace suddenly broke out, the war’s echoes will be heard for a long time on the Donbass.
The fields are mined, forests are full of tripwire mines. Even when it’s quiet and nobody is shooting, the civilians can’t live as they used to. Can’t go fishing, can’t go mushroom-picking…
I am becoming a bore and a scold. We were sitting a restaurant, and the TV was showing a video of some US singer who was running around dressed up in military clothing. It was an idiotic pop sing where a sexy girl in a uniform does push-ups and walks around with an assault rifle. Then it showed tanks, explosions. Absurd bravado against the background of the dynamic tune with rapid beat. And I simply begin to shake. Because none of those who made that video, including the actors, has even the faintest idea about what war is. And that can’t be shown.
Because war is pain, death, and fear without end.
Because war is when the city is festooned with posters like these, and not half-naked models. [ATTENTION! The butterly mine blows up under pressure, cannot be disarmed. Stepping on it leads to a foot amputation in 98% of cases. BE ATTENTIVE!]

(Butterfly mines are forbidden by a treaty. They can’t be disarmed. All of Donbass is covered by them…Too awful to believe)

This is Pavel Bondak. He is from Pervomaysk.
On 16 June he went fishing to Stavok. And disappeared. 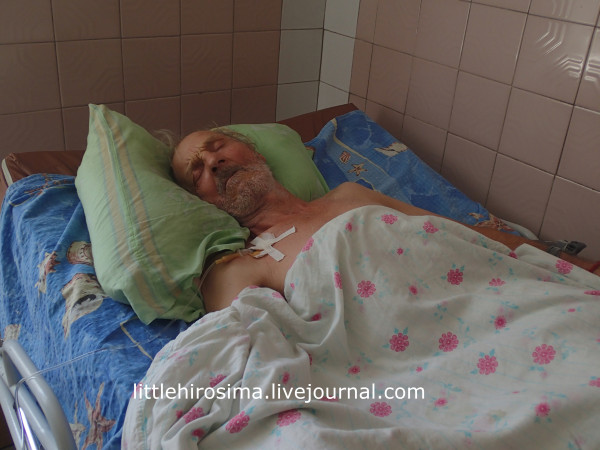 When he didn’t return, his son Sergey Bondak and his wife went looking for him at once.
–Then I heard a twig snap, as if it was breaking. I briefly turned around, and saw dust rise vertically behind a bush. Then I felt something warm under my neck. Then I realized it was blood and started to scream.
The son ran into a tripwire.
Both father and son went fishing. As if their lives were as before.
There is little shooting around Pervomaysk. There aren’t many skirmishes. Almost nobody sleeps in the bomb shelters.
But that’s an illusion.
That’s an illusion because the war hasn’t gone anywhere.
The war is the Donbass reality.
Where you can’t run around the fields, making garlands, or hiding with your loved one somewhere in a haystack far away.
You can’t go with your kids pick mushrooms.
Dear Lord, it’s terrifying to even go into the bushes by the side of the road…
When we came to the Pervomaysk hospital to deliver aid to the Bondaks, the father was in a coma.
–Is there a chance?
–We don’t know. He hasn’t regained consciousness.
The son was also in the hospital but he was upbeat. He’ll soon be released.
I’m smiling stupidly on the photo.
All the nurses were trying to cheer us up for the photo.
I felt entirely absurdly. Sergey too.
The whole situation is strange, stupid, and absurd.
This war. And fishing.
I could have never imagined something like this.
I couldn’t imagine that an ordinary video with people dressed up in military uniforms could make me so angry. 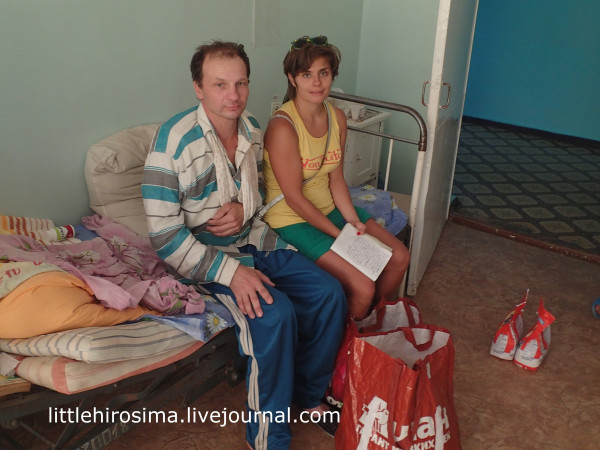