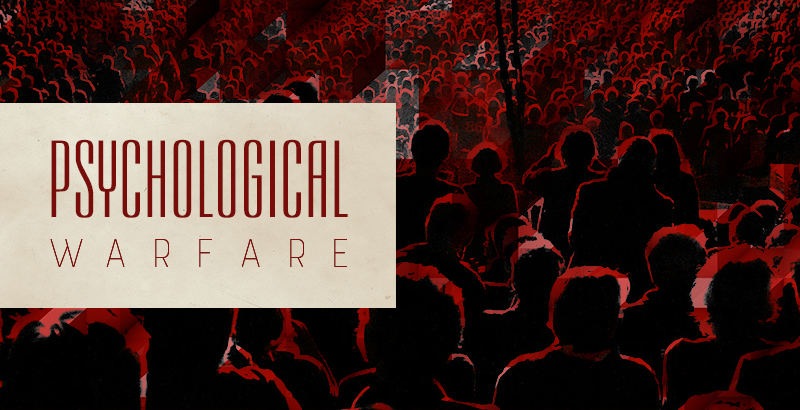 Today’s geopolitical struggles entail widespread use of psychological warfare against national elites, even from allied countries. This survey examines psychological techniques, including the use of informal NGO channels, which have been dubbed “organizational weapons.”

Psychological attacks attempt to take the target into veritable “pincers.” They are effective because the target, in the form of a national government, is subjected to pressure from both legitimate and “shadowy” actors, attacking from both above and below.

In order to carry out a pincer attack, the attacker must satisfy five conditions.

The objective is to provoke mass displeasure with the government through the formation of public opinion by emphasizing government’s failures, including imagined ones. This information campaign then leads to protests, civil disobedience, and other measures to provoke the government into suppressing the demonstrations through the use of violence, which in turn will persuade many individuals to demand the government’s resignation. The goal is to place the government into a stressful situation in which it has to make snap decisions in order to stabilize the political situation and to lessen the psychological assault.

This includes using agents of influence to lobby the government to adopt certain decisions. The lobbying accomplishes two things:

The target government leaders are flooded with false information on the unfolding events, with suh information coming from trusted and close sources including even relatives and good friends.

It impresses upon government members the unavoidability of adopting proposed measures.

Given growing pressure from above and below, the government falls under a psychological sense of emergency, in which it feels it has to make hasty decisions. If the decision does not satisfy the organizers, they step up the level of pressure. Once the government makes the expected decision, the organizers move to the next step.

The pincer mechanism works on many levels. It assumes the use of internal and external political forces to exert pressure. It can work on three levels at once—international, internal elite, and regional elite.

a) The official international relations, including the totality of bi- and multi-lateral contacts which the state’s foreign policy organizations maintain, and which can be used to pressure the country’s highest officials responsible for national security and the military, through diplomatic notes, official statements, etc.

b) The “transnational geopolitical pluralism system”, consisting of:

– The global specialized network of international foundations, banks, and humanitarian organizations which provide an appearance of pluralism. This is initiates psychological pressure.

– Multi-national corporations which have offices in most countries.

– Transnational NGOs and unofficial political entities, such as the Trilateral Commission.

This system can offer moral support to the protesters and separatists and also pressure national leaders by helping form a corresponding international public opinion.

External forces are far more effective at interfering in domestic politics under conditions of globalization. Terms such as “economics without borders” or “freedom of the press” assumes not only complete freedom for legitimate economic and media actors, but also for shadowy entities which can render financial and moral support of the anti-elites and sub-elites in their confrontation against the ruling elites.

The media play a key role in ensuring the “pincer”. They are used to magnify the political pressure on the leaders and to provide psychological support for the protesters.

Its a very good analysis. This is being used in several countries.

May I request the author to suggest methods and means to counter these pincer attacks.

We know the treasonous people. We know they are powerful. How do 3rd world nations demolish these attackers?

It’d be imprudent to publish it here I guess. I mean, the same criminals probably visit this site too.

Please figure out a way.

I agree, it would be stronger it it gave localized examples of the techniques that are widely known: the antics of thatcher are widely known in north west europe salazar in south america marcos philipines in asia

excellent piece.providing I sight into state of the art anti ,-statecraft .despite roles or stations in society what remains is truth to values shared