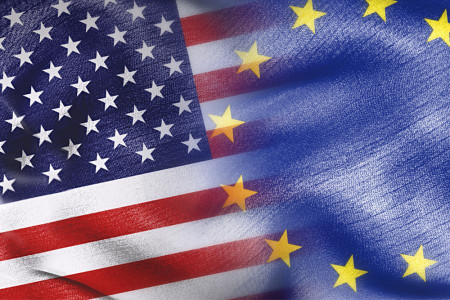 Original by Michal Krupa published by Konserwatyzm.pl; translation by J.Hawk

Barack Obama’s recent visit to the UK, which was interpreted by many observers as Washington’s attempt to exert pressure on British public opinion, should be viewed as the continuation of US policies dating back to the ’50s and ’60s aiming at the federalization of western Europe. Ambrose Evans-Pritchard,  economics editor of The Daily Telegraph, writes: “Brexit supporters ought to be ready to face a US intervention. The EU has always been an American project.” Even though Germany plays the role of economic hegemon in the EU, one has to examine the broader political background and the informal role played by the US in promoting eurofederalism.

Government documents declassified in 2000 make it clear that US intelligence services have conducted an intensive campaign in favor of “united Europe” during the first decades of the Cold War. The documents also indicate Washington needed the British participation in the planned federal structure. It’s a paradox that, to quote Professor Richard J. Aldrich, “(…) at a time when some British anti-federalists were viewing the ‘special relationship’ with the US as an alternative to (or perhaps even a shelter from) European federalism, the irony of the situation is that some of the federalist ideas prospered due to the US support.”

The main US institution promoting eurofederalism has been the American Committee for a United Europe (ACUE). It was founded in 1948 by Allen Dulles, the future director of the CIA. Its co-founder was William “Wild Bill” Donovan, who directed the CIA’s institutional predecessor, the OSS. Its board of directors included the CIA’s first director Walter Bedel Smith and other prominent OSS veterans tied to the CIA in various ways. The funding for the “European project” was provided using the Ford Foundation, the Rockefeller Foundation, and others, as intermediaries.

The ACUE was created at the wish of Winston Churchill who viewed European unity as an effective countermeasure (next to NATO) to USSR.

Already then, eurofederalism implementation strategies were characterized by the absence of transparency and secret proceedings. A note dated July 26, 1950,  represents Donovan’s instructions on launching a widespread campaign in support of the idea of a European parliament. Another, dated June 11, 1956, “advises the vice-president of the EEC Robert Marjolin, to covertly seek a monetary union. It also recommends that discussion be suppressed until the decision becomes basically unavoidable.” According to Evans-Pritchard, the leaders of the European movement such as Jozef Retinger “were treated by their US sponsors as mercenaries. The US role was that of a secret operation.”

And while the history of the alliance between the US and the European anti-Soviet, social-democratic, and liberal proponents of the European superstate is voluminous and interesting, this history should incline us to view the recent East-West turmoil in a different light.

There is no doubt that, in spite of quarrels and tensions at various points in time, Washington views EU, alongside with NATO, as the institutional guarantee of the Old Continent’s political, cultural, and economic subjugation. “Divide and rule” was never used by US governments against NATO or EU, and is rather a figment of euroskeptics’ imagination. Evans-Pritchard writes: “The euroskeptic camp is, oddly enough, blind to this reality when it assumes that powerful US forces will favor the British secession (…) The anti-Brussels movement in France, and to a lesser degree in Italy, Germany, and among the Scandinavian leftists, is operating on the basis of the opposite assumption, namely that the EU is chiefly an instrument of Anglo-Saxon control and ‘capitalisme sauvage.’ Marine Le Pen is clearly anti-American. She is criticizing the dollar’s dominance. Whether we like it or not, at least it’s a coherent strategy.”

He also notes that the temporary frustration caused by EU’s pacifist tendencies in the ’80s and ’90s disappeared “when Poland and the first wave of Eastern European countries joined the Union in 2004, thus introducing a whole group of pro-Atlanticist governments into the EU.”

The ongoing Ukrainian crisis is easier to understand in that context. Ukraine’s incorporation into the EU is closely tied to Atlanticism. Justin Raimondo really nailed it: “When thousands of demonstrators appeared in Kiev with EU flags and demanded Yanukovych’s removal, there was nothing spontaneous about it. (…) Even though USSR no longer exists and the Russian ‘threat’ to Europe is largely the product of neo-conservative imagination, EU’s role as NATO’s political wing is now more evident than ever before. In fact, it is easier for Washington to control Europe through a single center of power than with dozens of sovereign countries.”

Therefore it should come as no surprise that Carl Gershman, the chairman of the National Endowment for Democracy (NED), lobbied for Ukraine’s association with the EU on the even of the Maidan unrest, justifying it in purely Atlanticist terms: “Russian democracy could also benefit from this process. Ukraine’s European choice will accelerate the demise of the Russian imperial ideology which Putin represents.” This is important to note because Gershman leads an organization financed by the US government and founded in 1983 so that it could openly operate where the CIA used to operate, by financing dissident organizations in foreign countries and, when necessary, to effect a “regime change.” These are easily verifiable facts, including the role of William Casey, a former CIA director, in NED’s creation.

The implications for European national movements are clear: trusting the US to play the role of a counterweight to European federalism is and has always been an illusion. The popular in Poland conception of driving a wedge between Russia and Germany by establishing sizable US military and economic presence in Poland which would supposedly strengthen its position vis-a-vis Brussels, is the product of ignorance of history. EU elites’ europeanism is not anti-Atlanticist. It is merely complementary. Any effort aimed against the EU must be accompanied by an effort to liberate Europe from US hegemony. Particularly since, as the current US election season trends are showing, the majority of Americans also doesn’t see the need for Washington to continue monitoring Europe.

Naturally, it also implies the desire to cheer for the golden-haired New York billionnaire who has already made himself known as a destroyer of the Atlanticist-Europeanist calm by his tirades against globalism, mass and uncontrolled migration from the Third World, political correctness, and, which alreadyhas offended more than one Polish supporter of Atlanticism, by his conciliatory approach to Russia.