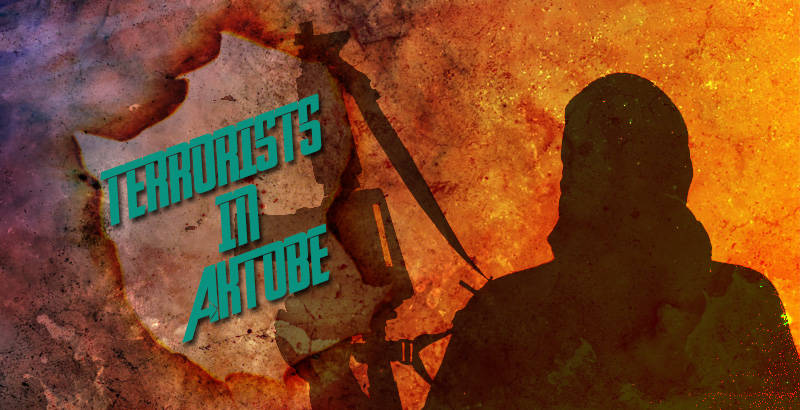 On Sunday [June 5] unknown armed people raided gun shops and military units in the Kazakh city Aktobe. They tried to take guns. The assailants were neutralized. The authorities implemented a “yellow” level terrorist alert in the country.

Why the terrorists chose Aktobe

On the surface, there are no obvious reasons for this event. The President of the country Nursultan Nazarbayev managed to create an effective government, relying on a durable economic base. In the last decade, despite complications and problems, it was possible to maintain peace in the country between the different ethnicities and general stability in internal politics.

However in today’s world, problems appear not in the countries where there are real internal conditions for such events but in those that happen to be focal points for the interests of geopolitical players.

For example, the regime of Muammar Gadhafi in Libya was internally stable and economically successful. As such, in one tragic day some “rebels” (who later were identified by the world community as Islamist militants, transferred from abroad) took by storm military units in Benghazi and unleashed a civil war that finished with the total destruction of the Libyan government.

The armed insurgency in Aktobe was literally a repeat of the beginning of the Libyan war. Only it did not succeed. The Islamists smashed the gun shops and tried to capture the military units. If they had succeeded, there wouldn’t be any doubt that with the use of the seized stockpile of arms they would have armed a small army and would have tried to establish a “rebel government”.

As a Libyan format of a civil war, Aktobe was a convenient location. It is an important enough city to become the capital of the rebels. At the same time, it finds itself away from Kazakh major centres. Military units of Kazakhstan are also far away, which are concentrated in covering the problems of the southern borders. Because of this, the Kazakh army is not very big when compared to the size of the territory. To transfer the military personnel and to create military units big enough to crush the insurgency (if they had succeeded in reaching the destruction phase) would have been complicated.

Aktobe itself happens to be the intersection of highways that allow for fast transfers of volatile rebel squads to the south, west and east of Kazakhstan as well as to the north, to the Russian border that is 100 kilometres away.

One hundred kilometres to the south, a one and a half hour drive on the traditional jihadist “carts” (pick-up trucks with machine guns), for whom the Kazakh steppe is as open as the Libyan Desert, the railroad hub Kandyagash is located.

Crossing through Aktobe the railroad branch also comes to the Russian border. By rail or ground roads, from Aktobe to Orenburg it is 300 kilometres. Directly across the steppe, the distance is one and half times shorter.

The border between Kazakhstan and Russia, as partners of the Eurasian Economic Union (EEU) happens to be open. If it were not, to cross a thousand kilometres border on the steppe would not be so trivial. For this, a whole army is needed.

Under the gun – Russia and China

Kazakhstan is one of the founding members of the EEU. Through it runs the shortest transit road for Chinese goods to Russia and further to Western Europe, one of the main potential branches of the new Great Silk Road, which will unite the Asian and European markets.

Kazakhstan is also one of the main guarantors, along with Russia, of stability in Central Asia. Moreover, it is through Kazakhstan that Russia has access to the former Soviet central Asian republics as well as its military base in Tajikistan.

The countries of Southern Central Asia, experiencing jihadist pressure from Afghanistan, in the event of destabilization of Kazakhstan, are in a trap. Their borders lose stability practically on all their distance (except the Turkish-Iranian border), and help and support can come only through the air.

Consequently, several strategic tasks would have been achieved in the event of a successful insurgency in Aktobe, with minimal resources, at the expense of local power.

First, in the event of an internal conflict, the Kazakh army would not have been able to be a stabilizing force in the Central Asian South.

Third, the long and open Russia-Kazakhstan border would have given unlimited possibilities to the jihadist gangs to penetrate the Russian territory. In its turn, this would have required from Moscow extreme measures to ensure the military protection of the border. That is, Russia would have been forced to weaken her military forces in the western sector and concentrate a large quantity of military personnel for restraining jihadist penetration on her own territory.

Considering the mobility of the jihadists and the low cost of their maintenance (in general they feed from local resources), it would have taken much from Moscow, and for a long time, in allocation of military forces and material resources, to fight a small but elusive opponent.

Fourth, in the event of a minimal success in developing an insurgency, the destabilization threatened all of Central Asia. That is, a large black hole (from Orenburg to the Indian Ocean) would have opened on the southern borders of Russia, eating away the scarce resources. A quick closing would not have been possible. This would have been a decades long problem.

Finally, projects such as the EEU, the SCO and the CSTO would have been under threat.

Let’s imagine that with the joint efforts of Russia and Kazakhstan, in the framework of obligations of the CSTO, the insurgency was suppressed relatively quickly and the large-scale destabilization of the region was avoided. Just the fact of the military cooperation between Moscow and Astana in the northern regions of Kazakhstan, where there is a large number of Russian population, would have allowed our “friends and partners” to once again start talks about Russian interference in internal affairs of neighbouring states and accuse her of attempts of recreating the USSR. Most certainly attempts would have been made to sow discord, if not between Moscow and Astana, certainly between the Russian and Kazakh population in Kazakhstan, as well as strengthen military Russophobic hysteria in Eastern European border states.

The insurgency in Syria destabilized all of the Middle East. The insurgency in Libya destabilized Northern Africa. Both of these insurgencies, as well as the coup in the Ukraine created serious problems for Russia and the European Union. On this background, the insurgency in Kazakhstan would have completed the picture, plunging in chaos all of central Eurasia and destroyed with lightning speed the trade and economic ties between Europe and Asia.

On this background, the American project of the Transatlantic and Transpacific Free Trade zones would have appeared as proposals without alternatives.

I am sure that in Aktobe, we have to deal with the first but certainly not the last attempt at starting a civil war in a key country of Central Asia.

The Kazakh security forces worked quite effectively and this is good. But this also means that the next attempt will be better prepared. So we cannot relax.