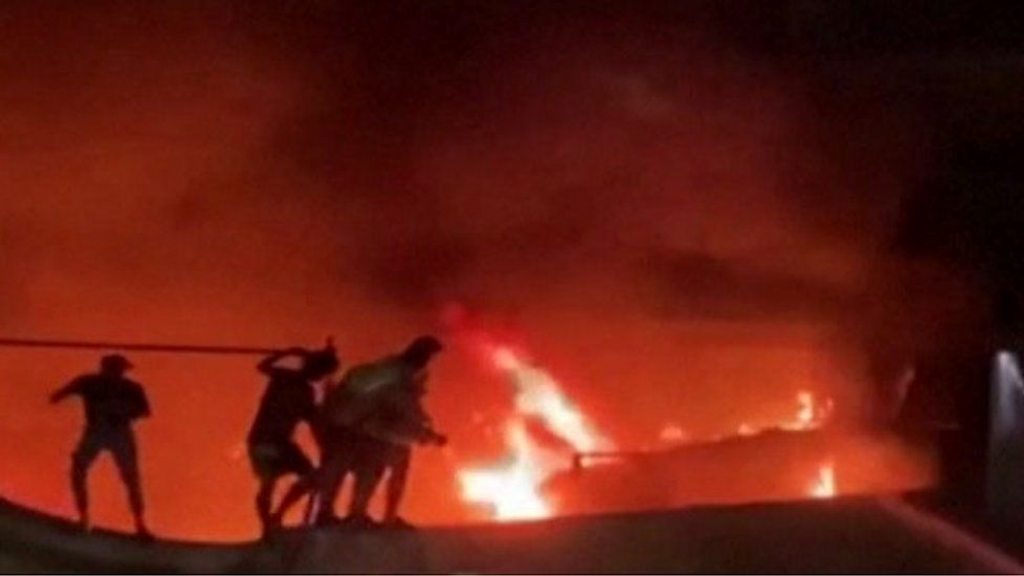 On July 12th, a fire that broke out in the coronavirus ward of a hospital in southern Iraq has killed at least 64 people and injured dozens more, according to Iraqi health officials.

Flames swept through outbuildings of the al-Hussein Teaching Hospital in the southern city of Nasiryah on Monday that had been set up to isolate those sick with COVID-19.

Patients became trapped inside, with rescue teams struggling to reach them in time.

Photographs from the scene showed onlookers silhouetted by the flames that encompassed the buildings and lit up the night sky.

Later, images showed rescue workers picking through the charred remains of bodies and hospital beds on the ward.

At least 44 people have been killed and over 67 injured in a fire likely caused by an oxygen tank explosion at a coronavirus hospital in Iraq's southern city of Nassiriya. pic.twitter.com/gh38kpi3eR

Dozens of dead and injured in a fire that broke out in Al-Hussein Hospital in the city of Nasiriyah, southern Iraq#ذي_قار#الناصرية #مستشفي_الحسين #قدم_استقاله_فاشل pic.twitter.com/R8uMctUHx0

Officials told the Associated Press that the fire may have been caused by an electric short circuit, but did not provide more detail. Another health official in Dhi Qar Province, where Nasiriyah is located, said the fire erupted when an oxygen cylinder exploded.

This is the second time a fire has ripped through the coronavirus ward of a hospital in Iraq.

In April at least 82 people died at Ibn al-Khatib hospital in Baghdad after in a fire caused by a faulty oxygen tank.

Iraq’s prime minister, Mustafa al-Kadhimi ordered a full investigation into the causes of this latest fire in Nasiriyah.

He also ordered the suspension and arrest of the health directors of Dhi Qar Province and al Hussein hospital, as well as the city’s director of civil defense.

“Corrupt officials must be held accountable for the fire and killing innocent patients. Where is my father’s body,” one young man told Reuters as he searched among charred bodies wrapped in blankets in the hospital’s yard.

In a show of anger and frustration, relatives of the dead and injured clashed with police outside the al Hussein hospital, setting two vehicles on fire.

The fire also prompted furious calls on social media for the resignation of top officials.

Local authorities imposed a state of emergency in Dhi Qar governorate, of which Nasiriyah is the capital, and ordered doctors on leave to help treat the injured.

#Fire Breaks Out at COVID-19 Imam Al-Hussein Hospital just 3 months after over 80 were killed in a #COVID ward in a similar incident of exploding #oxygen#Iraq pic.twitter.com/IFt7AOCwYf

Much of the country’s health infrastructure is dilapidated and investment in public services is limited by endemic corruption.

Since the coronavirus vaccine rollout began in March, Iraqi health authorities have fully inoculated only around one percent of the country’s roughly 40 million people.

Iraq was a almost a first world country with a good universal health care system before the Americunt and NATO arseholes sanctioned it, invaded, bombed and destroyed it. The Americunt losers are spitefulcunts who deliberately destroy and target hospitals after they lose, the Saudi scum have done the same in Yemen.

Iran first nation to offer help to neighboring Iraq after tragic hospital fire. An Iranian field hospital is to be airlifted to Nasiriyah to help the local population.

This shite never happened under Saddam.

He was the best leader Iraq ever had since the time of the Ottomans.