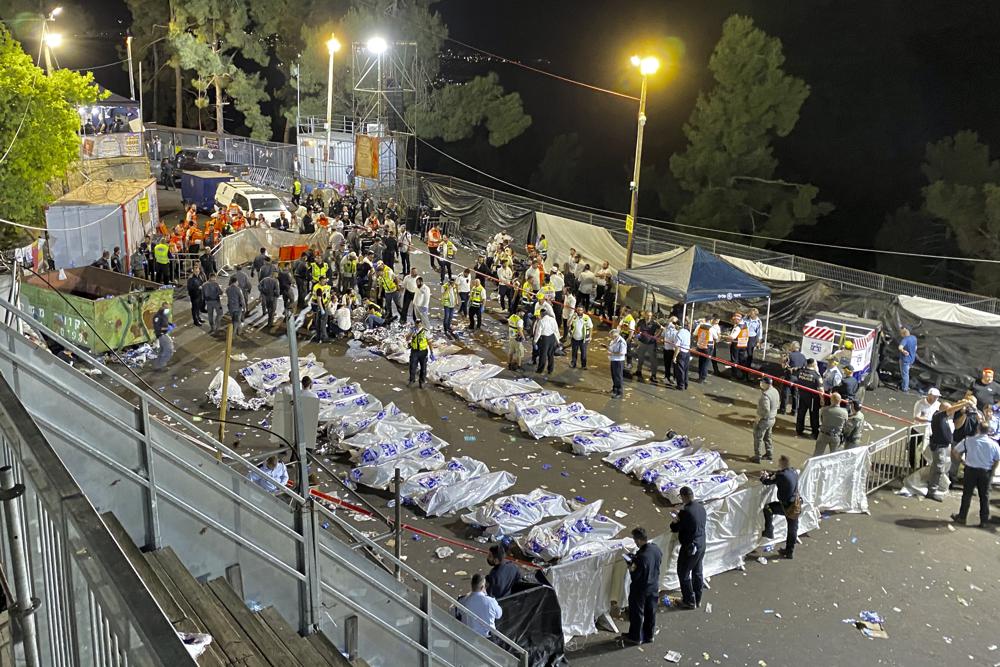 In the early hours of April 30th, at least 44 people were crushed to death in a stampede at an over-crowded religious bonfire festival in Israel.

Prime Minister Benjamin Netanyahu described it as a “heavy disaster”.

The stampede happened as tens of thousands of ultra-Orthodox Jews thronged to the Galilee tomb of 2nd-century sage Rabbi Shim Bar Yochai for annual Lag B’Omer commemorations that include all-night prayer, mystical songs and dance.

Witnesses said people were asphyxiated or trampled in a tightly packed passageway.

Times of Israel puts the number of injured around at least 65, while Magen David Adom, Israeli emergency services’ organization claimed that 24 of those injured were in critical condition. Six helicopters were sent over to address the situation.

The outlet cited a police official as saying “dozens of participants in a concert had ‘slipped,’ falling on those below them in the stands and causing a crushing domino effect.”

Other reports have said the crush was caused after “a section of stadium seating had collapsed at the event site,” and many were killed as a result of asphyxiation after it was set off. 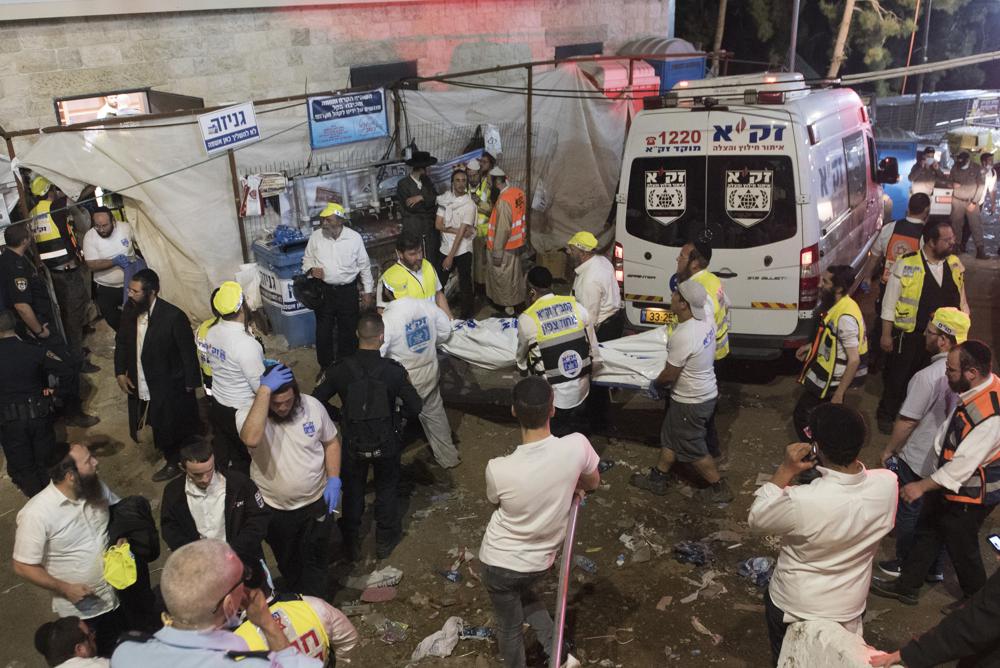 Footage recorded before the crush showed the thousands-strong participants dancing, reveling, and jumping on stands at, what the newspaper identified as, a “makeshift arena.”

Eli Beer, director of the Hatzalah rescue service, said he was horrified by how crowded the event was, saying the site was equipped to handle perhaps a quarter of the number who were there.

“Close to 40 people died as a result of this tragedy,” he told the station.

Zaki Heller, spokesman for the Magen David Adom rescue service, said 150 people had been hospitalized, several dozen in serious or critical condition in a radio interview.

Heller told the station “no one had ever dreamed” something like this could happen. “In one moment, we went from a happy event to an immense tragedy,” he said.

The Israeli military said it had dispatched medics and search and rescue teams along with helicopters to assist with a “mass casualty incident” in the area. It did not provide details on the nature of the disaster.

It was the first huge religious gathering to be held legally since Israel lifted nearly all restrictions related to the coronavirus pandemic.

Health authorities had nevertheless warned against holding such a large gathering.

But when the celebrations started, the Public Security Minister Amir Ohana, police chief Yaakov Shabtai and other top officials visited the event and met with police, who had deployed 5,000 extra forces to maintain order.

Ohana, a close ally of Netanyahu, thanked police for their hard work and dedication “for protecting the well-being and security for the many participants” as he wished the country a happy holiday.

Prime Minister Benjamin Netanyahu is struggling to form a new parliament coalition, and this incident is sure to impede those efforts.

Israel will not exist in a few years, largely due to demographics.

Israel is fading away like the US. However, some in the US administration are cognizant of reality and trying desperately to work out a deal with Iran.

Sad and also highlights the superstitious third world primitive nature of all religions where people are propelled into emotional fervor and stampedes. So-called Israel is in just another undeveloped western aid based Apartheid regime on its way to oblivion. Its bombast against Iran for past four decades has not matched its puny capability. Now the US is wisely working out a detente with the region’s only historical superpower Iran.

Karma for being on stolen land.

I find it quite amusing ;}

Or how about cow dong

Modi’s extremist Hindu idiocy has devastated dirt poor India which is now officially a failed state as even arch enemy Pakistan is offering assistance. India’s failure to deal with poverty, basic hygiene, sanitation and ability to provide food and water to its destitute 1.4 billion people while spending billions on weapons and corruption have ruined its future. Modi’s insanity to not imposing Covid curbs or investing in a medical infrastructure has literally destroyed it. The very bizarre caste based Hindu “religion” is a disaster as strange religious festivals continued and Modi stressed that drinking cow urine, bit by snakes and banging pots and pans will ward off Covid. With almost 90% real illiteracy, the Indian teeming masses were primed for doom.

Modi is a CIA creation and corrupt to the core and is propped up by India’s elite and corrupt billionaires. He has weakened India to a level unheard of before. Hopefully, we will get rid of him soon. Almost all rich Indians have escaped to the west. Now even Australia is clamping down.

India has nothing to fear or be ashamed of, well except for Modi. 3000/day from covid is 1 %, and that is likely high.

India has just become # 3 for GDP in the world.

How many persons will die in India in one day from all reasons? – Quorahttps://www.quora.com/unanswered/How-many-persons-will-die-in-India-in-one-day-from-all-reasons

Even for a so-called Hindu troll, you are a sick attention seeking gutter snipe. Human misery is nothing to gloat about. 1400 Muslims did die in the Mecca Hajj pilgrimage as equally sad event. About half a million dirt poor Indians are dying in the streets to a corrupt government and is that something to cheer about? Show some semblance of dignity and empathy.

So says the Hindu fool. Your people are dying in scores in the streets but you poke fun at random muslims:

How about you shut the f**ck up and go lend a hand in burying the dead, maderchot?

We know how you muslims hide your casualties.

Abay madar chod, get lost, you are a disgrace bhonsere kay.

We know you ‘Proud Hindus’ hide your covid19 casualties …

He is not an Indian and is only bringing disgrace to all real Indians.

On 24 September 2015, an event described as a “crush and stampede” caused deaths estimated at well over 717 pilgrims, suffocated or crushed during the annual Hajj pilgrimage in Mina, Mecca, Saudi Arabia, making it the deadliest Hajj disaster in history.

Hows Covid working out for you?

You are a despicable little man who enjoys the suffering of others.

No he isn’t. You’re a despicable little liar who spends his days spreading subtle zionist anti-Iranian propaganda in service of his joo masters.

Bungo you despicable little troll you finally found your half brother .

I see you’ve learned the word ‘despicable’. Don’t overuse it.

Despicable is the definition of people like you who enjoy the suffering of others.

I enjoy the suffering of those who cause others suffering.

Your labels mean nothing to me.

How about your Proud Hindus dying in scores in India and the Chinese having to save your stoopid asses?

Why would this incident negatively affect Netanyahu efforts to form a new parliament coalition?

Because Netanyahu, as Likud party conservative leader, requires political support from Israeli hard right, and ultra Orthodox Jews, to maintain his position on conservative side of politics – and those groups may well blame him for allowing this event to occur – and frankly, it really was terrible idea to have such a large gathering at this time – if a crowd gets Covid spooked the rush could end badly.

Israel is a failed state with existential demographic challenges. Muslims and Christian owners of Palestine will be in overwhelming majority in less than two decades. The whole sliver of coastal Palestine that the British and the west handed over to the Zionist squatters in 1948 is less than 22,000 sq kms or smaller than most global cities. In this squashed occupied land there are 9 million people, Jews, Muslims, Christians and Druze. The real Jews are leaving in droves as the Apartheid Afrikaners did. The Palestinians are on their way to absolute majority in a very short time. US has sent Blinken (a Zionist) and senior intelligence officials to sound out the frightened and impotent Zionists about a all encompassing nuclear deal with Iran. Israel’s bluster simply did not match its military or political capabilities. The cool Persians carried the day.

Exactly. I give israel 9 years.

They were Orthodox Jews, so it’s their own problem.

Just saw how Muslims are celebrating this tragedy on the media.These sick rap!$t 👎

Some of them are, I don’t expect them to love us. But again, Orthodox Jews have their own ceremonies which most of us Secular Israelis don’t take part in. So for me it doesn’t really matter.

The existence of the Zionist squatter third world failed state in Occupied Palestine is looking bleak. US and Iran are on the verge of a nuclear detente.

I follow it but for health reasons, not religious ones.

My diet is based on fish, chicken, eggs and fruits / vegetables. Less red meat for me.

Yeah xD I get my Iron from Avocados, Walnuts and Almonds.

Here’s a Buddhist celebrating too. So f**ck you :-)

You mean like the jews dancing and celebrating while the IOF bombed children in Gaza?

I believe that you shouldn’t give muslims any weapons technology.I have no hopes for Netanyahu he might have already sold high tech weapons to the uae .Never trust a Muslim

Actually Turkey and Iran have a far more advanced and extensive military technical infrastructure than the aid dependent Zionist regime, so Muslims are far ahead. Even Pakistan and Bangladesh are light years of impoverished Covid infected India. Trolling is one thing, but reality is another. You need to get another line of work.

burnt quran smashes the belief about sky book, all humans have to die one day

Chit of a boy hasbara troll.

Innocent people have died, blame their leaders not them.

What makes you think they were innocent?

There are huge problems here between Secular Jews and Orthodox Jews Free man, like the conservatives vs reformists in Iran.

And the Jews will blame __FILL IN THE BLANK__. Most likely to be blamed by the Jews: Russia, Iran, White Americans, Muslims, thinkers, the Jew-wise. Basically, anyone not a Jew could be blamed.

Thinking is “anti-semitic,” as the thinking will inevitably come to see the Jews and their crimes.

Somebody dropped a penny?

Thats the kind of news I like to read in my morning gazette!