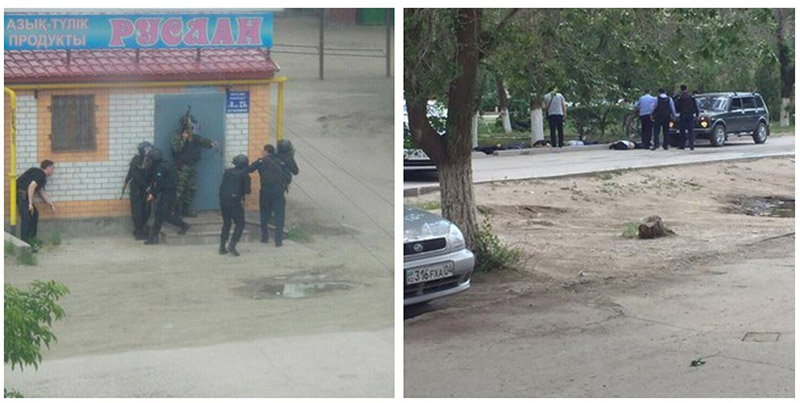 At least 3 people were killed and 10 injured by Islamist militants in the city of Aktobe, in north-western Kazakhstan on June 5. Some 20 militants stoled weapons from 2 gun shops and attacked a military base in the city with some 300,000 residents.

The country’s Interior Ministry confirms that 2 Kazakh soldiers were killed and 9 injured during the clashes.

Controversial media reports argue that up to 15 civilans were also killed. However, this hasn’t been confirmed, officially.

“Thanks to the countermeasures one of the attackers was arrested, three killed and another one injured. Several of the perpetrators were blocked while some others managed to escape. A manhunt for them is underway,” Kazakhstan’s Interior Ministry spokesman Almas Sadubayev commented the situation.

Initially, the attackers robbed two gun shops, killing one person and injuring another one.

A group of armed men in the center of Aktobe:

Then the Islamist militants used the stolen weapons to attack a nearby base of the national guard. They attacked the military base’s circulation control office and made an attempt to seize the arms room in order to get more weapons (assault riffles, mortars etc). However, they weren’t able to bypass the guard.

Clashes at the military base:

Following the failed attack on the military base, militants retreated from the scene.

The militants retreat  from the military base. You can see as a gunman fires from a sunroof of the car at 1:07:

Kazakh security forces intercept and shoot at the militants on 0:24. The gunman at the sunroof is shot dead:

Without doubts, today’s developments have become possible due to the fail of the Kazakh special services that hadn’t been able to prevent a threat of the Islamist terrorism in the country. Morever, it could be noted that the June 5 attack looks similar to 2011 when Kazakhstan was hit by several terrorist attacks, conducted by Islamist elements.

SouthFront has information that the recent attack in Aktobe could have a “Turkish trace” [SF editor: We don’t say that the attack was inspired the Turkish authorities. But the attack could be linked to a wide range of Islamist organization that operate in Turkey without any restrictions].