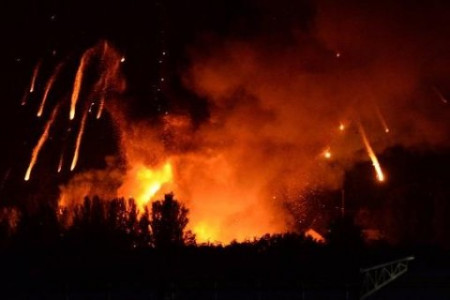 The explosions started yesterday, at around 19:30 local time (17:30 GMT) in a blaze after two gun rounds in the Kiev-controlled town of Svatove in eastern Ukraine. According to the deputy head of the Lugansk Regional Military- Civil Administration, Yuiy Klymenko the depot stored overo 3,500 tonnes of munitions. He also added that the explosions seriously make the efforts to put out the blaze more complicated.

According to the Ukrainian Interior Ministry’s preliminary information, two people are dead, and 3 are wounded, though the number of casualties in the case is expected to rise. Svatore’s mayor, Evgeny Rybalko confirmed the information

According to the mayor, a soldier was trapped under rubble at the destroyed military base. Residents, scared hid into basements for shelter. It is reported that the mobile communications and power are downed in the area following the fire.

“Windows were trembling,” said Valentin Torba, a local journalist. “Everyone was hiding or running away.” One resident described how her niece’s house was struck by shell fragments.

“People are so scared,” said one correspondent for a regional news agency. “When we went into a basement, the fire could be seen within the city limits.”

Emergency services rushed to the arsenal to tackle the blaze though exploding shells and the intensity of the fire thwarted efforts to bring it under control.

‘’an act of terrorism’’ is one of the thesis that the police is investigating. According to media reports, the Ukrainian Security Service (SBU) has opened a criminal investigation.

Lugansk region governor Heorhiy Tuka told the 112 Ukraina television channel, “two flare gun rounds were launched, the servicemen have put out the first round but while they were extinguishing the fire, a second one was launched.’’

The eastern Ukrainian region of Lugansk has been mired in fighting since 2014, when the Kiev-led government launched a military operation against the independence supporters in the region.

The conflicting sides have signed a ceasefire agreement in February, and are pulling back their weapons.