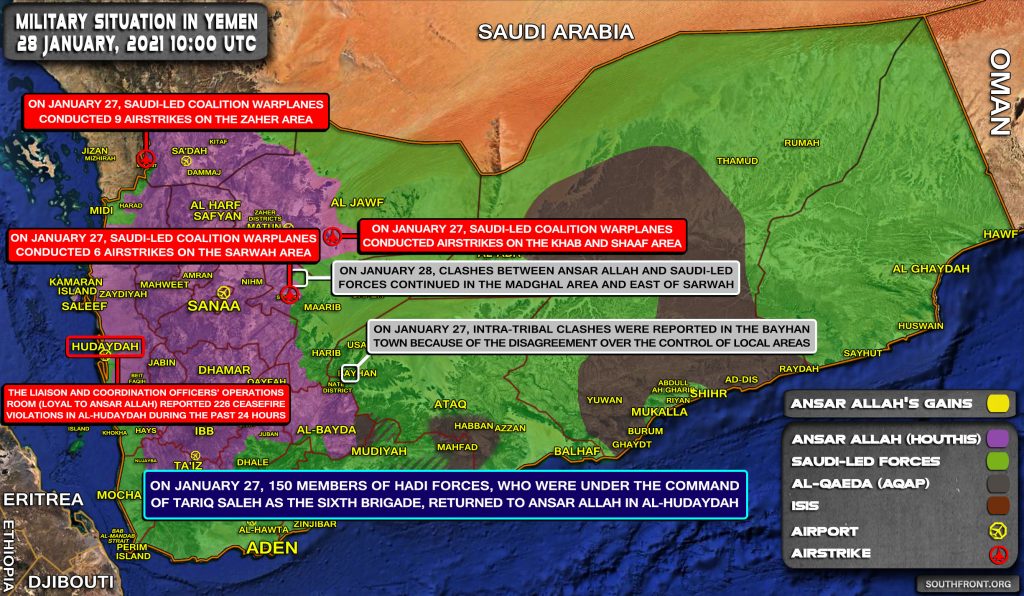 At least 150 members of Saudi-backed forces have defected to the Houthis (formally known as Ansar Allah) as the Saudi-led coalition and its allies are on retreat in central Yemen. According to reports, the defected fighters were members of the so-called 6th Brigade led by Tariq Saleh as the Sixth Brigade. Units of the 6th Brigade are currently deployed in some areas near al-Hudaydah.

Meanwhile, heavy clashes between the Houthis and Saudi-backed forces once again erupted in the Madghal area and east of Sarwah. Pro-Saudi fighters tried to advance on the Houthi positions there, but their attack was repelled.

The general situation in central Yemen for the Saudi-led coalition and its proxies remains critical and pro-Houthi sources claim that the defense of Saudi-led forces is about to collapse. Regardless of this, the recent gains by the Houthis in fact pose a direct threat to the provincial capital of Marib.

A brief summary of the recent developments in Yemen:

Never ending desert war.Seems like India could export both shia and sunni to yemen and they can kill each other.That would reduce the population burden on our country.

India should dig latrines, feed its starving people and stop the eventual break up.

But, but, BUTT why does a Hindu shit in the streets while a bear shits in the woods?

Because the Cow shits in the streets and those who worship the cow must do as the cow does.

you cannot even clean the shit of your streets, let alone decide anything political

Yeah, especially since you can’t feed your own farmers:

THAT was a world-class chimpout. Soldiers locked out of their own garrison by an iron gate, bailing out over the edge of the fort wall to get away from rioters. Wobbly plastic pipe with one rusty hangar every 15m = human avalanches of said soldiers bouncing down the drop over each other while assorted garbage rains down on them. Berserk tractor driver nearly drives over the wall WITH them. My ankles ache – there has got to be more than a few broken legs during that acrobatic retreat, but everyone falling/jumping down walks away or is helped away, so it doesn’t look like any serious ropeless rappelling injuries.

Oh, and always a bad idea to piss off farmers – just never expected them to storm the fort. Farmers: let the Houthis know if you need extra help. Looks like you got this one though. Kek.

you as a hendu got no dog in this fight. Why do you bother commenting? Very strange no?

It is quite strange that a lone mentally disturbed Hindu with the IQ of feces on a Mumbai filthy beach spends his days trolling on Middle Eastern and Russian websites.

It’s amazing too because Iran tries its level best to be neutral towards India, and has cordial relations with them, but here is this guy spewing constant anti-Iran rhetoric? Amazing.

Just Me
Reply to  Ahson

Just an idiot troll with an inferiority complex as most filthy ugly Hindu rats do.

The Saudi military has effectively collapsed despite massive US and NATO assistance, the Yemenis are now bringing the war home. When drones and missiles explode over heavily defended Riyadh, it does not inspire too much confidence in a primitive tribal culture. 2021 will prove to be a disastrous year for the battered Saudis if they do not withdraw from Yemen.

The US will step up their involvement since they’ve designated the Houthis as terrorists.

can they afford it? doubt it.

It is best to push the racist supremacist global Jewish satanic slave empire dictatorship, to order its slave soldiers to engage in as many conflicts as possible all over the planet, as this will speed up the total economic, military, political and social collapse of the Zio empire.You want the USSA to spend 5 trillion plus per year on war instead of the about1.5 trillion it spends now.

Yes it is harder on humanity in the short term but this costs will be greatly exceeded by the gains when humanity is freed from the racist supremacist global Jewish satanic slave empire dictatorships oppression, genocide, racism and satanism.

US wants to normalize relations with Iran and has picked Robert Malley with Egyptian background as the new special envoy. Malley worked with Obama and Kerry is a friend of Zarif from Harvard days. This is not looking very good for Saudis, Zionists or the UAE petro-fools.

If that’s the case then what’s stopping them (i.e. SA, UAE, etc…) from ending the Petrodollar? I can’t see the US wanting to end it as it gives them huge leverage over other nations.

US economy is tatters, our debt even outstrips EU begging bowls like Greece and Spain. US is beset with domestic problems and half a million of the most vulnerable citizens have already died, more than the total deaths if WW2 and Vietnam combined. There is no appetite for a war for Jews anymore. The reason the Zionists threw s hissy fit is Pentagon’s refusal to get involved in a war with Iran. Biden’s is a figurehead but the deep state is now rethinking its approach towards Southwest Asia in particular as there is a permanent powershift with Turkey and Iran as the key pivots as described by Stephan Kinzer in his epic work in 2009.

Just Me
Reply to  Condor

US is looking to cut a deal with Iran and get some economic and trade benefits from a rich, large and educated market.

Saudis dug their own grave when they invaded Yemen, now the fun really starts. Ansarallah drones will crawl up the headchopper MBS big dumba$$.

See children, this is why you don’t depend on mercenaries to do anything that matters.

Saudi wahhabi dogs to be blamed. They could have stand behind the Palestinians and not in bed with zionist UAE.

They could have supported Turkey against UAE.

Turkey would have supported them with training, leading Yemen army and technology against shia Houthies.

Thanks to Saud regime, Iran is winning in Yemen.

Turkey saudi uae, all invaders, all peices of shit working for zion and rich americans/euro trash.

You are included. Stay home and mind your business, we can raise hell in your hometown too ya know!

Dont make this a faith battle, its not about faith its about control of the money.

Only idiots say its about religion.

ITS ABOUT MONEY STUPID, SOMETHING YOU WILL NEVER HAVE, FUCKEN PAGAN!