The Sairoun (On the Move) coalition led by radical Shia cleric Muqtada al-Sadr came away with the most seats in Iraq’s recent elections — a great success for this new force emerging on the Iraqi political landscape. The Sadrist Movement’s alliance with secularists and the Iraqi Communist Party won 54 out of 329 seats in the parliament, 12 more than Prime Minister (PM) Abadi’s Nasr Coalition (Victory of Iraq) bloc.

Sairoun campaigned on an anti-graft platform. One of its slogans involved putting an end to any foreign interference into the country’s political life. Mr. al-Sadr did not run for office himself and can’t take up the office of PM but his bloc is in a position to form a new coalition government, which should come into existence within 90 days after the election results have been certified. 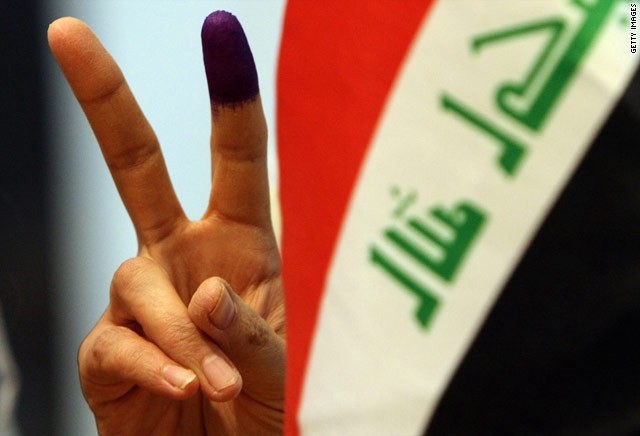 This issue was already a subject of discussion when Iraqi Prime Minister Haider al-Abadi met with Muqtada al-Sadr on May 19. The PM said the government would be strong and capable of providing its citizens with services, security, and economic progress. Hopefully, the government that will be created will manage to overcome some deep sectarian divisions, otherwise any hope for a better life will remain a pipe dream.

Mr. al-Sadr is in a position to fulfill that task, in his role as a nationalist who has allied himself with communists, Sunnis, Kurds, and political independents, while strongly criticizing the sectarian nature of Iraq’s politics, which is obviously at the root of the country’s problems. Muqtada al-Sadr wants a united nation and that’s a good thing. According to him, the country needs a bloc that includes “independent technocrats,” regardless of their religious affiliations or political views. “Our door is open to anyone as long as they want to build the nation, and that it be an Iraqi decision,” Sadr said. He wants to fully integrate paramilitary groups into state institutions and the official security forces — the right move in the right direction for someone whose goal is nation-building.

He has fought Americans and studied in Iran. He claims to be a pro-Iraqi “non-sectarian” patriot who is not subject to Tehran’s influence as a Shia cleric and not rushing to expel US forces from the country, at least not right away. In March, Iraq’s parliament voted to demand a timetable for a withdrawal of the US-led coalition forces. More than 5,000 troops remain in the country after the Islamic State was routed last year.

Prior to the elections, Muqtada al-Sadr had reached out to his Sunni Arab neighbors, such as Saudi Arabia and the UAE. The country’s relations with Egypt and Jordan. There has been progress in Iraq’s relations with Turkey. Now that the terrorist threat has been diminished, the country can concentrate on reconstruction in order to become an influential regional power.

Iraq wants to be independent and immune to outside influence, whether from the US or neighboring Iran. The way to do this is to diversify its foreign relations. China’s “One Belt One Road Initiative” opens up new opportunities for Iraq. Cooperation between Baghdad and Beijing is on the rise.

Iraq is also looking toward Russia for joint economic projects, defense cooperation, air support, and oil deals. Moscow provides an alternative to US military assistance, which Baghdad would like to see reduced, along with America’s political influence. The weapons supplied by Russia to the Iraqi military include MI-35M and MI-28N helicopters, Su-25 jet aircraft, and Kornet-E anti-tank guided missiles. This year Russia has sent 73 T-90S and T-90SK tanks in accordance with a contract signed in 2017. When Islamic State forces closed in on Baghdad in 2014, it was Russia that urgently delivered the much-needed weapons to repel the deadly threat.

In February, Iraq announced plans to purchase a Russian S-400 missile-defense system. The US threatened sanctions in response but Baghdad never announced a change in its decision. With the new coalition government formed, the deal can go through, which will greatly enhance Iraq’s air-defense capabilities. A joint operations center is up and running in Baghdad, as part of the effort to fight jihadists.

Iraq and Russia have a history of coordinating their anti-terrorist activities. Baghdad receives security assistance from Moscow. The two sides exchange information on a regular basis.

Iraq has officially asked Moscow to help it become a party to the Astana peace process that was launched to settle the conflict in Syria. The request has Russia’s backing. Syria and Iraq share a common border. Both nations are still fighting the Islamic State terrorists. Both have seen their territorial integrity threatened. Russia invited Iraq to participate in the Syrian National Dialogue Congress that was held in Sochi on Jan. 29-30. In this way Iraq was able to play a role in a diplomatic effort in which it had a vital interest.

Last month the Iraqi Air Force attacked Islamic State targets in the eastern Syrian town of Al-Bukamal, coordinating the strikes with the Syrian government led by President Bashar al-Assad. Some Western media saw it as the emergence of a new anti-Western axis in the region. Prior to this, Iraq had bombed the terrorists as part of the US-led coalition. It looks like the times are changing.

The results of Iraq’s May 12 parliamentary elections are being seen in Moscow as a chance to promote that relationship. There are vast opportunities here for cooperation and partnership that should not be missed.

Another step towards Middle East sanity and peace. Another step away from the Empire and a step towards a multi polar world and the negation of the almost satanic malevalence of NATO and the west. Good luck folks.

I personally don’t like such results, where the first party gets only about %16 of the total seats in the parliament. The resulting administration will not be strong enough and they have to compromise.

Here’s the raw results, without coalition and such things which main use to portrait the votes more or less than reality:

There are Iraqi members here, I think they can shed light for us better than these articles. I’d appreciate if you take the time to explain to us a little bit.

If possible, please tell us our own affiliation or if you did or did not vote. Thank you.

H. A
Reply to  Garga

Fatah got 47 seats, not 54. The system is a proportional representation system where 165 members are needed to govern. It allows the governing coalition to be moderated and be influenced by different parties like Germany. It’s much easier to implement without needing censuses and a lot of public education. But yh you’re right, governing becomes a lot more difficult as you have to spend a lot of time persuading everyone else.