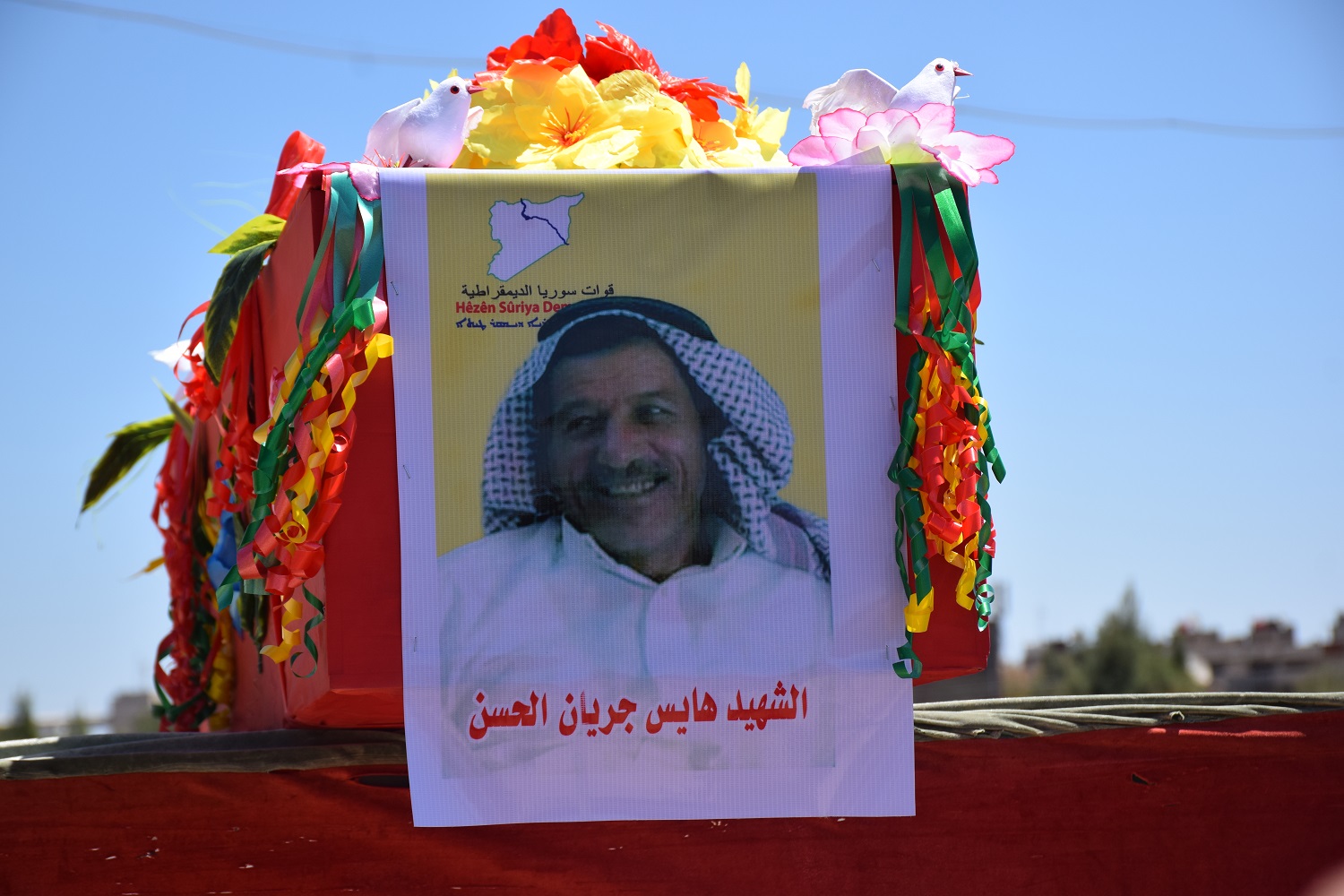 The assassination of an Arab tribal leader has inflamed the ongoing clashes between the pro-government National Defense Forces (NDF) and Asayish, the security wing of the Syrian Democratic Forces (SDF), within the al-Qamishli city in northeastern Syria.

The leader, Hayis Al-Jaryan, was shot and killed by a sniper a few minutes only after leaving a tribal meeting with NDF leaders in Tayy district on April 23. Heavy clashes have been taking place in the district for three days now.

Al-Jaryan, a prominent leader of the Bani Sab’a tribe, was taking part in efforts meant to broker a ceasefire agreement in al-Qamishli.

Asayish accused the NDF of assassinating al-Jaryan, who was a supporter of the SDF. However, opposite accusations were made by Tayy tribe against Kurdish forces.

As a result of the assassinations, the clashes returned. Asayish launched a new attack on NDF fighters in Tayy district. By the morning, Kurdish fighters captured Fadel Hassan and Ibn Sina schools in the district.

A day earlier, a delegation of the Russian Military Police and the Syrian Arab Army visited the frontlines in Tayy and met with officers from Asayish. A ceasefire was brokered. However, it collapsed within a few hours.

The SDF is taking advantage of the conflict to strengthen its influence in al-Qamishli. The conflict is being promoted as a struggle against the regime, while Kurdish forces are in fact facing local Arab tribesmen who are defending their own homes.

As for now, the clashes are still limited to Tayy district. However, the situation may soon spin out of control. Arab tribes in northeastern Syria are not so enthusiastic about the SDF ongoing attack on Tayy tribesmen.

The day these quislings face justice wilk be a great day for Syria!

SENTENCE THEM TO DEATH

Probably was some globohomo sniper from the Jewnited Snakes of Amerikwa who wanna ruin any chance of return to equilibrium.

The illegitimate J.O. Biden regime doesn’t like the idea of a loyalist enclave inside commie Kurd territory.

I assume the Sootooro Assyrians are still aligned with loyalist Arabs in the area. If so, these ancient people too are running afoul of the vile globohomo.

Everywhere in the world the Westerners use the same tactic, pay the traitors available to fight against one’s people, the same thing that in Ukraine, Nazi-gays who kill the natives, even in Syria where the agents of the evil empire finance traitors Kurds to destroy the natives, but this has historically brought to ferocious wars against invader, Vietnam didn’t teach anything then?

turkey, syria, iraq and iran they need to finish off the fifth columns kurds in the pay of the disunited states of insufferable fools and in bed with the jews in palestine. the quickr sdf and pkk andypg are neutralized the quicker peace will be in the middle east and the quicker the slime bucket jews are kicked to hell the better it will be for everyone.

Ha ha. Maybee Grandnoher is the new Sharif in town.

I support the SDF in Qamishli, that is Kurdish territory.

Were you born and raised there too know that 🤔

No, my grandparents origin was Kirkuk which was also a Kurdish territory, but as an Iraqi Jew my loyalty belongs to Israel. I hope Kurds and Turks can solve their disputes as I like them both, but when it comes to the SAA then I’m all pro Kurdish.

I hope everyone reads this statement very carefully, as it also applies to 99% of ” chosen ” no matter which nation they reside in.

” but as an Iraqi Jew my loyalty belongs to Israel. “

Phoron
Reply to  Fog of War

Yes, I caught that as well.

Fog of War
Reply to  Phoron

Its time to wipe out Asyaish and SDF. this kurdish thugs are part of US zionist to destroy syria and split the country. TRibemans should pick the weopeons and get rid of this Asysish from Qamisli and Dier zor and raqqa. SDf /Asyish are playing dirty game on behalf of US/Zionist bcuz they want to remove russia and SAA from the Qamisli Airport so US can create Airbase there. Russia should act and warn this ASyish thugs now.

Just try, the SDF is not ISIS. If the SAA tries to cross to the Eastern side without coordination then the Kurds will teach them a good lesson.

This is happening in a country that is supposed to be holding elections very soon. I can imagine Russia’s frustration as it tries to calm this potentially disruptive occurrence. Brokering ceasefire between dozens of rebels. LOL. Goodluck with that. Hope the ceasefire holds long enough for elections to happen (laughing). Because this war is far from over.

The US aren’t allowing the Syrians to hold presidential elections in the Syrian administered zones of Al-Qamishli and Al Hasakah, so it won’t affect them at all. The funny thing is the US allowed the locals here to vote in the last parliamentary election, and very surprisingly Assad proved he’s just as popular here as he is in the rest of Syria, maybe that’s why the US isn’t allowing the locals in the government administered zones to vote in this presidential election, the US is too afraid Assad would achieve a winning repeat performance.

Syrialiveuamaps reports that Asayish forces have captured the NDF headquarters and there’s a video showing the interior of the abandoned building, so the report seems to be correct. This is a serious blow for Assad and he should directly intervene before things get any worse, the Russians hearts are in the right place but Assad has way more sway with both the Baathist NDF forces and the Kurdish dominated SDC that control Asayish, so he’s the best person to arrange a ceasefire and negotiate an end to this dispute. I don’t think this will affect the presidential election in any significant way, but if it does it’s more likely to have a positive result for Assad than a negative one, but it may affect the Syrian Governments procurement of vital goods in the autonomous zone. Oil and food products like wheat may be used as tools to blackmail Assad into accepting SDC demands, so I don’t think Assad would be holding a very good hand if he did directly intervene in these negotiations, but I suspect it’d still be better than the hand the Russians are currently holding. After abandoning their bases in Ain Issa and Tall Tamir the SDC now have a very dim view of Russia’s diplomacy, and even less trust in their word. On the other hand the SAA remained in their bases and stood shoulder to shoulder with the SDF, despite the Turkish threats to attack both towns, that earned Assad a lot of brownie points which he could use in any future negotiations. Sadly the Russians don’t have any brownie points left, they’ve already used them all. That’s why I’m a little doubtful the Russian mediation will achieve much in the long term, not unless they give the SDC some rock solid guarantees concerning Turkish intervention. But Assad’s already put his money where his mouth is, so he’s already delivered his guarantees, now all he has to do is call in his SDC debts, and remind the SDC that Turks are still attacking the M4 and the 2 towns. Hopefully someone can resolve this very quickly, because anything that affects the Syrian Governments ability to procure food and oil in this region also affects all the rest of Syria, things are already at breaking point already and any further loss could mean a tip over the edge. Good luck to Russia or Assad whoever ends up negotiating.