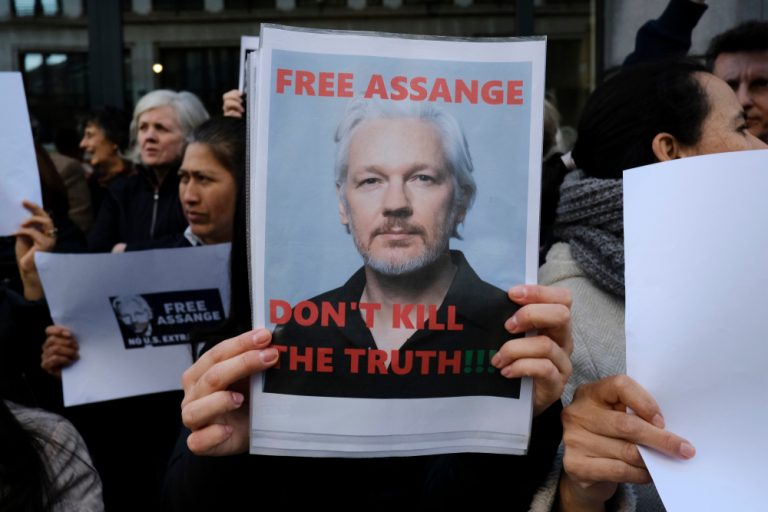 As James Lewis QC for the prosecution, representing the US government, revealed, “I’m just saying about my charger.  It’s in court and I’m going to run out of battery.”  It was one of those moments that said much about the fourth day of proceedings at the Old Bailey regarding one Julian Assange, publisher, Australian national and wanted by the US Department of Justice for incongruous charges of espionage.

It all had the appropriate Orwellian shades and show trial trimmings.  The US prosecution team had gone remote; Assange’s legal team was physically present and masked.  Technology again did its bedevilling magic at the Central Criminal Court.  At one point, Joel Smith for the prosecution was attempting to get the attention of Judge Vanessa Baraitser to inform her that nothing could be heard in the court room.  The screen of chief prosecutor Lewis had also frozen.

Unlike the previous three days of these extradition proceedings, the central contentions were not Assange the public interest journalist, the discloser of informant names, or President Donald J. Trump’s war on the Fourth Estate. It was the revelation that COVID-19 had found its way into the Old Bailey. On Wednesday night, Judge Baraitser was told that a member of one of the legal teams may have been exposed to the coronavirus.  As was announced on Court News, “Julian Assange’s extradition hearing at the Old Bailey today will not be going ahead because the husband of one of the US lawyers has come down with COVID-like symptoms.  Once he gets the result of a test the judge will determine how best to proceed.”

Assange would have had reason to reflect upon this moment with bitter mockery.  His conditions in Her Majesty’s Belmarsh Prison have been a picture of shoddy treatment, both physically and symbolically.  Access to his legal team has been scandalously scant, exacerbated by pandemic lockdown conditions.  The entire institutional treatment of the Australian has been considered nothing less than that of a tortured figure, “shocking and excessive”, to use the words of the International Bar Association’s Human Rights Institute.   His supporters, fearful, see him at risk of contracting coronavirus and suffering, in his frail state, the gruelling effects of COVID-19.

His efforts to seek bail in order to escape the dangers of viral transmission have been foiled by the pitiless Baraitser.  In March, Edward Fitzgerald QC attempted to convince the judge that medical “experts consider that [Assange] is particularly at risk of developing coronavirus and, if he does, that it develops into very severe complications for him.”  Should he contract it, “it would be very doubtful that Belmarsh would be able to cope with his condition.”

Swatting such concerns away, Baraitser saw little reason for concern: there were no instances of COVID-19 at Belmarsh, a reckless conclusion to draw given the self-isolation measures imposed upon a hundred personnel at the time.  The group Doctors for Assange were shaken by the ruling. In their March 27 statement, they vented.  “Despite our prior unequivocal statement that Mr Assange is at increased risk of serious illness and death were he to contract coronavirus and the evidence of medical experts, Baraitser dismissed the risk, citing UK guidelines for prisons in responding to the global pandemic.”  The editor-in-chief of WikiLeaks, Kristinn Hrafnsson was furious.  “To expose another human being to serious illness, and to the threat of losing their life, is grotesque and quite unnecessary.”

In June, Doctors for Assange reiterated the call that Assange be granted bail, having met “internationally recommended criteria for prisoner release during COVID-19.”  Globally, prisons were being emptied of inmates to prevent the march of COVID-19.  Assange remained the exception.

On September 10, 2020, history grimaced with irony. It was the prosecutors for the United States, Assange’s incessant harassers, who had been potentially infected.  Notwithstanding this, Judge Baraitser was not averse to pushing onto a fifth day of proceedings, a point that agitated the legal teams and seemed to be as quixotic as it was indifferent.

Fitzgerald, representing Assange, urged the court to accept the logical assumption that “COVID will be in the courtroom.”  The staff of the court would themselves be “at risk, and you yourself may well be at risk.”  It was a good ploy on Fitzgerald’s part to mention the court as the primary consideration, reserving the concerns of his client for last.  “Finally, our client Mr Assange, who is vulnerable you are aware, would be at risk in court.”  His request for adjournment struck a common chord with Lewis.  Proceedings will be postponed until September 14, awaiting the test results.  In the meantime, the defence and prosecution will make interest of justice submissions on how they wish to proceed in the event the test is positive for coronavirus.

In the meantime, the rest of the Old Bailey will continue to grind.  A spokesperson for the City of London Corporation was businesslike in moving forward.  “The Central Criminal Court is deep cleaned every day in accordance with government guidelines and will remain open.”

It was left to Kevin Gosztola of Shadowproof to sum up the day’s sentiment in wry fashion: “Looking forward to the courtroom sketch of Assange in a glass box with only the judge in the room as we proceed virtually.  That’ll be [sic] quite appropriate image for this case.”  Lewis, in the meantime, might be able to obtain his charger.

The legal system is a farce if we take over we will have to clean it up, the old fashioned way of course.

They are simmering it, meanwhile they impose silence on their corporate media, thus they intend to demonstrate their power to change the false into true and vice versa without anyone being able to fight them, the false Navalny poisoning finds space in the media, to say keep calm and blame the Russians, the rest is forbidden.

… where the upper arm is at a 45 degree angle, and the forearm 90 degrees vertical, ensuring the fist is facing forward, as the palm in the nationalist salute faced front…

(2) Throughout the 1980s the West conspired to regurgitate Soviet Bloc under counting of communist party membership numbers in order to facilitate the canard of imploding Soviet Bloc political establishments, explaining the West’s enabling of the fake ‘collapse’ of the USSR…quod erat demonstrandum.

(3) Before any religious sectarian strife in Yugoslavia (1991 – 2001) first there would have been massive reprisals against the reviled Communists who implemented draconian discriminatory policies to wipe out religion in Yugoslavia. LCY anti-religious discriminatory policies were so effective that within fifty years those who were without a religion increased by an astronomical 3,100%! The fact that no reprisals took place against LCY members proves that the ‘religious strife’ and ‘breakup’ of Yugoslavia was manufactured and controlled by the Communists.

(4) The World War I Allies never did immediately send a naval expedition to Petrograd to easily topple Lenin & Bolshevik’s November 7, 1917 coup, thereby promptly returning Russia to the war, Russia’s involvement in the war being a critical variable for the Allies’ victory strategy against the Central Powers, proving (a) that the Allies knew they were going to win the war; (b) that the war was set up to (i) weaken the West’s influence in the world; (ii) weaken the West’s people’s confidence in their institutions and what those institutions stood for; and (c) one objective of the war was to settle into power the first above board Marxist state, with more to follow. In fact, there already was an anti-Marxist force in Russia at the time that if ordered would have conquered all of Bolshevik Russia during this period when the Bolsheviks were very weak. The unit was the 60,000 strong Czechoslovak Legion (soon to be 100,000 strong) but instead of sending the legion 700 miles north to Petrograd, the Allies sent it on a 6,000 mile odyssey across Russia to Vladivostok for evacuation to Europe(!), once again proving the Allies knew they were going to win the war…that the war was a Marxist operation.*

(5) “On the initiative of the KGB, an army of Soviet vigilantes five million strong, the so-called ‘druzhiny’, was recruited from among the Komsomol activists. Their units were led by retired Chekists. They have been patrolling and policing the streets of all the Soviet cities. Their primary task has been to prepare the Soviet people to ‘behave’ during the forthcoming ‘liberalisation’.” – KGB defector Major Anatoliy Golitsyn, ‘The Perestroika Deception‘, March 1989, pp. 14-15.

(6) Leningrad Oblast (Province) is still named Leningrad Oblast! Engels City is still named Engels City! Engels Air Force Base is still named Engels Air Force Base! Russian military personnel still refer to each other as “Comrade”! Kaliningrad Oblast is still named Kaliningrad Oblast! The State Emblem of the Soviet Union is atop the Duma building, and illuminated at night for clear viewing! Soviet Red Stars are still attached to the bows of Russian naval ships! The Hammer & Sickle logo is still on Aeroflot commercial aircraft! Not one statue to Lenin has been destroyed in Russia, where out of the 3,000 still standing throughout Russia, only a handful have been carefully taken down (in locations where tourists frequent) and hidden away in parks and museums, the remainder of these monstrosities to Russian nationalism/Russian Orthodox Church rubbing historical salt into still open wounds of Russian nationalists! The Russian ‘electorate’ are only ‘electing’ for president Soviet era communist party member Quislings, who persecuted the 85% of the religious population held captive by the Communist Party during the ‘Soviet era’!

———————- * Even more telling is neutral Denmark’s laying mines off its coastal waters in international waterways in August, 1914 [thereby violating the 1857 treaty opening the Danish Straits to all shipping, where, “No ship of any kind may, under any pretext whatsoever, be subjected to detention or obstruction at the passage of the Sound or the Belts”] at the prompting of Germany (Germany too lays mines in the Danish Straits) and Great Britain does nothing! Not a word from the Allies (and the usual deafening silence from the Marxist co-opted press), in fact, even though access to the Baltic Sea is critical for the Allies to roll up Germany quickly by (a) closing the Baltic Sea to all German surface/subsurface vessels; (b) denying German access to trade with Sweden; (c) bringing the Royal Navy and the Imperial Russian Navy together; (d) forcing Germany to relocate critically needed infantry divisions and heavy armaments away from the Western Front for the new Baltic Front; (e) allowing British and Russian troop landings across the Baltic coasts, preventing German forces from moving eastwards towards Russia; thereby (f) knocking Germany out of the war before one shot is fired.

A simplified variant of the Marxist salute is to raise the [whole] arm vertically, but ensuring the fist is still facing front.