President Bashar al-Assad during the interview with Russia-24. Source: the Syrian Presidency

Syrian President Bashar al-Assad has called that the current disagreements between his country and Turkey “illogical.”

In an interview with the Russia-24 TV, al-Assad sent a friendly message to the Turkish people, questioning the motives behind their country’s military intervention in Syria.

“I ask the Turkish people, what is your issue with Syria? what is the issue that a Turkish citizen deserves to die for? What is the small or large hostile act that Syria took against Turkey during the war or before the war? completely nonexistent,” the Syrian President said, according to a report by RT on March 4.

Last month, Turkey became directly involved in supporting Syrian militants, including those affiliated with al-Qaeda, in Greater Idlib. The Turkish military supplied the militants with heavy weapons and went on to provide them with direct fire support.

Al-Assad’s remarks appears to be meant to de-escalate the tension with Turkey, while holding the Turkish government responsible for the recent escalation in Greater Idlib.

God keep and protect President Assad, who is a true hero in these dark times.

a few more around and it ain’t netanyahu or trump or mohammed bin salman or or – the good side is iran, is russia, is china and a few more – I might even say north korea since he’s decided not to bow to the criminally corrupt forces of washington dc and the other kow towing ass kissing toads making up the court around the trump jew-loving family.

President Assad is right, but the Turks are led by Wahhabi-style fundamentalist terrorists with neo-Ottoman delusions to boot, not to much logic to be found among those lunatics. As if that weren’t enough, Turks have Western Zioterrorist/NATO blessings for their invasion of Syria.

assad is right but since erdogan apparently is off his meds, the result is what we see – turkey-chaos. wonder if they will allow him to remain as president for long.

Turkey is led by stupid idiot most foolish headchopper and terrorists harboured called ErDogend asshole.He wish so sincerely to hide behind NATO with his criminal hidden agendas.Led the sons and daughters of Turkey die for Erdogan and sons Syrian oil theft deals.

Why dont Turkish people removed this mentality destub fuck Erdogdick and put him in rehabilitation centre.

HOLY SH*T! Disqus actually CENSORED my Erdogan meme! So I guess that Erdogan is after all the “chosen one” by the Western elites, by which now they’ll try to shut down our criticism of him. “Pending” my freaking ass! 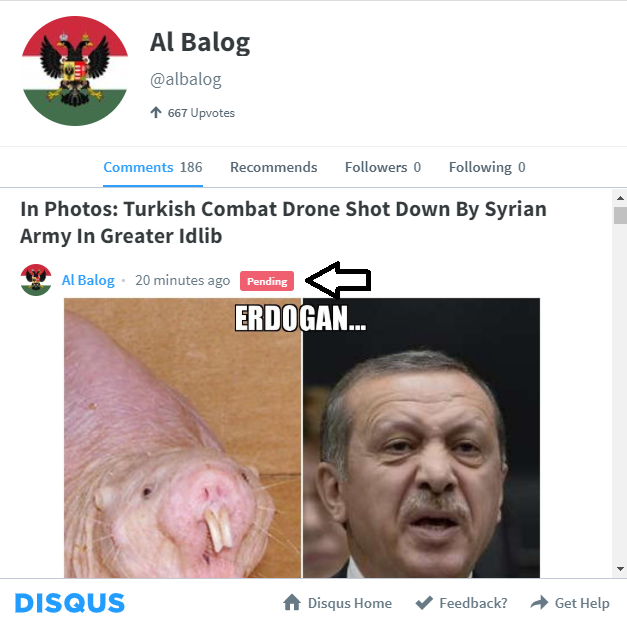 Maybe the staying of USA in Syria is more logical. Assad sound so naive, doesn’t he rialized yet that USA-Israel-NATO (Turkey) works in coordination and follow the same plan (destruction of Syria) ?

Assad’s forgotten that Erdogan himself is illogical and irrational, nothing will change while Erdogan’s still in power.
And what about the northeast, has that been forgotten, the Turks and the US may be making plans about that region too, a no fly zone over the north east combined with a new Turkish ground assault would definitely force Assad to pull troops away from Idlib, is that on the cards again now, no one’s talking about it but from Turkey’s point of view it could be a game changer, and that’s what a smart commander would do.
Erdogan wouldn’t even need too many troops to do it either, even without a US enforced no fly zone in place he could still force Assad to send reinforcements to secure the area, Erdogan would need just enough men and equipment to pose a possible threat to territorial integrity, and Assad would then have to respond with 10 to 20 times the amount of troops to defend the area.
I hope Putin and Assad are still keeping an eye on that region too, because apart from the Turkish threat that still exists there, the Kurds also still pose a problem for Assad, and with the new developments between Turkey and the US, it may be possible the US is making plans to extend its operations there, which would then give the SDF even more reason to oppose Assad request to reintegrate.
I think what’s happening in Idlib now is also having ramifications on other parts of Syria, we’ve already seen a minor rebellion in one town in Darra put down by the SAA and threats from Assad to do the same to another one, and it won’t take much at all to destroy the fragile peace in some places in Syria, the last thing Assad needs now is half a dozen mini rebellions breaking out, if they do things could change dramatically.
So if you think this is just a simple problem the Russians can solve by military means you’re totally mistaken, Erdogan’s intervention has not only changed the dynamics for Idlib situation, it’s also changed the whole dynamic for Syria, all the rebel who reconciled with Assad because they thought they had no choice will now possibly be reconsidering their decisions, just like the Kurds will be.
Erdogan’s just done as much harm to the rest of Syria as he just did to Idlib, Idlib might be burning now and the centre of attention, but the rest of Syria has to watch out for sudden wildfires breaking out too, if any new wildfires erupt and join up with the big one in Idlib, the whole country will probably burn.
More Russian military police working with the Syrian MP’s could help stop any rebellions erupting, hopefully Russia’s sending some reinforcements right now.