On October 7, Syria’s President Bashar al-Assad said that the Russian-Turkish deconfliction agreement on the northern governorate of Idlib is a “temporary measure” and vowed to restore his government control of the whole territory of Syria.

“What we have witnessed recently of Western hysteria ahead of Idlib battle stems from the fact that it is a fateful thing for them, because the Syrians’ victory in it will lead to the failure of their plans and to Syria’s return as yet a more serious prospect in the face of their project in the region than it was before,” the Syrian Arab News Agency (SANA) quoted Assad remarks during a meeting of the Central Committee of al-Baath Arab Socialist Party in the city of Damascus as saying.

Furthermore, al-Assad predicted that Syria’s enemies will ramp up their attempts to drain it militarily, politically, economically and socially as it progresses towards victory. The Syrian president noted that this will incur internal challenges, which are no less serious than the ongoing war.

Last month, Russia’s Foreign Minister Sergei Lavrov said during a press conference that the deconfliction agreement on Idlib is an intermediate step, which is aimed at eradicating the terrorist threat.

Under the agreement, a 15-20km demilitarized zone will be established around Idlib by October 20. Opposition sources confirmed that the Turkish-backed Free Syrian Army (FSA) is already withdrawing its heavy weapons from the zone. However, more radical groups are yet to obey the agreement.

He is giving the last vestiges of head chopping, baby killing goy golem thug takfiri trash, one last chance before ordering the Syrian Arab Army to fully engage and remove them once and for all. They had best listen and act accordingly.

One last chance to leave Syria, through Turkey. And go where?

They could go to the US,UK,EU,Saudi Arabia,Gulf States,Australia et al and spread the Export Version of American Democratic Values in any or all of those countries :)

Yes, or face death. They brought on themselves.

Not Australia, how about keeping them in Turkey since Erdogan is their leader.

Its not the 1st time that Australia would have been the dumping ground for criminals anyway and I am sure your big four banks would employ them John :)

Australia is a good place to send criminals.

That’s what England did in the past

Australia is a historical natural habitat for all criminals. For the term of their natural life :)

That was 200 years ago, since then Australia has become civilized and undesirables are not permitted to enter.

There’s nothing civilised or desirable about Australian foreign policy.

They have been fellateing the neocons since 2002.

Probably right, may explain why the Australians don’t have the same problematic issues as other western countries such as the US, UK and EU. Must be the luck country.

Alaska is most suited for the headchoppers and Zionists. Both need to learn swimming and ice skating.

They will face their demise if they dare try and defy the SAA and the Syrian people. Some of these were defectors who foolishly took up arms with the zionist janus farcical mercs working to unseat the Syrian President. They have brought whatever effects they will suffer upon themselves. Most of them will die out of their own pig headedness. They are in no position to dictate terms any longer. Neighboring Countries don’t want them either.

From where they have intruded in to Syria. Assad have not invited them on dinner.

They can go anywhere where the neocons and zionists can’t give them weapons to overthrow a sovereign nation. Personally, I think they should go to Israel. They’d fit right in.

All the headchoppers and their masters are doomed. Idlib will be freed along with eastern Euphrates valley and Golan.

Keep counting your ? once you finish counting that will happen gd luck

London, Paris, lots of heads to chop in Europe.

who cares,Syria is for Syrians only

There is no doubt that Syria will liberate all its lands from US sponsored Wahabbi headchoppers and Zionist scum, including the Golan.

Turkey was one of the biggest players in creating ISIS together with Qatar. Financing them and buying stolen Syrian oil. I wonder why Erdogan changed sides and “allied” with Russia. Maybe he was promised gold by IFUKUS but instead received a coup orchestrated by US.

He figured out midway into the Satanic Zionist plan that he was being used as a useful idiot for the Jews and was being set up to be thrown into the wolves. The Jews had convinced him that he was going to get an Ottoman Empire if he cooperated with the kikes but he soon realized he was actually getting a Kurdistan right on his border with the next step being the break up of Turkey itself. He had no choice, it was a matter of survival.

They actually did a good job promising Erdogan everything. Look how happy Erdogan look, while they f.cked Turkey behind his back………………………………LOL. 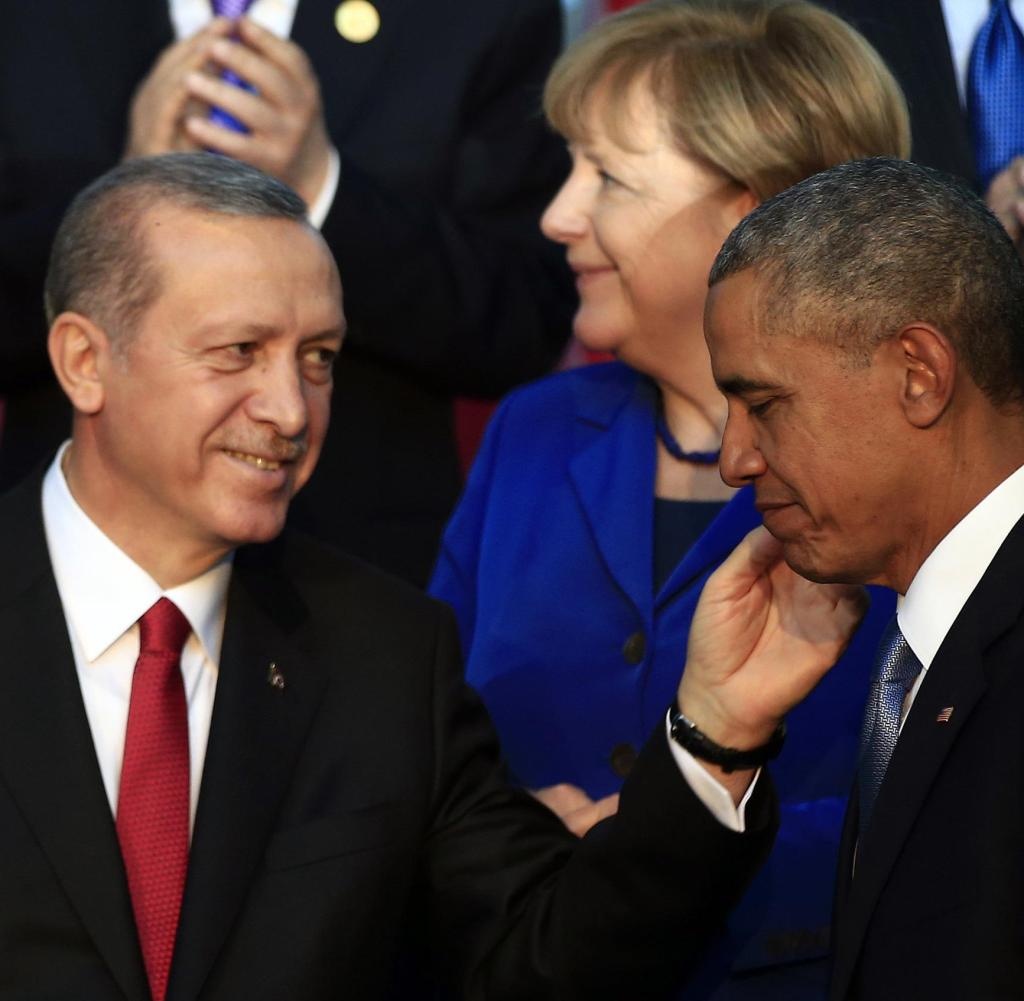 Erdogan and Obama are definitely flirting in that shot.

Assad is correct and what he should also be stating and adhering to is in regards to the Syrian Constitution, he should stipulate that the Constitution will not be rewritten until the war is over and all uninvited foreign occupational forces are gone, till then the current Constitution will remain. That will piss off the anti-Assad movement.

The Idlib arrangement actually sounds like a good plan. Congrat to Russia/Turkey/Syria!

Incredible our Western governments finally revealed themselves with such a disgusting rotten soul behind their white angel human rights faces. All for sale.

Hello .I’m curious what you all think about this YouTube, Israel Live News.

He’s positing that perhaps Israeli is benefiting from Russia’s decision re the downing of their plane, bringing in S-300s, notably allowing the Syrian military to operate them. Hence, Washington is then compelled to increase the shipments of F-35 jets, the whole package it entails. Good for the US economy as a certain externality, beneficial to the aristo- (and) corporal crasies of both Washington, and associated mafia dons across the western world. It’s so damn sad what’s become of the US and also Europe. What to speak of MENA and large parts of Asia. What they tried to get off the ground in Russia of the 90s. What could have been. It’s really pathetic and shameful, not only of the elites and their ilk have wrought across the planet over the centuries, but what the citizens and serfs allowed for themselves and sometimes valiantly, enthusiastically surrendered over their sovereignty and allowed so much crime and terror take hold throughout society.

That’s what’s very troubling for me, the latter. It’s heartbreaking. I love humanity. I don’t like what’s been going on, what my fellow citizens have let on and empowered the beast for so long. I don’t like to see so much hate, as Peter Gabriel sang. There’s no justification or excuse. We should all be very advanced and evolved; most notably, civilized (that includes the elite class among society and from afar.)

We deserve better! I sometimes wonder the gravity and immensity of the collective sadness, hurt, intransigence, traumas, real or imagined, injustices, hate, psychopath. I understand all the qualities found within the Godhead Itself is also manifested throughout the material universe in the microcosm.

Therefore it is my honest question, “Is God a psychopath? The most powerful, diabolical, intelligent psychopath? Just a curiosity. How to explain for all the cruelty and pain we see man dishing out or receiving from nature.

in the mean time you are on my lawn doggy.

Who pissed in your cheerios today?

You’re alright. I needed a good slap in the face to kick out the week here. It’s a cereal.

his question is:”What benefit Israel will receive from Russia selling S300s to Syria”

the answer is “None”.

Then you could take all Israelis and jews around the world and write bibles or produce days of videos to try proving that in fact there could be some benefit, and come up only with either crazyness or utter idiocy.

Thanks for your insight. He’s trying to appear like he knows something we all don’t know. Ego. Unsubscribing.

I wrote back when it first came out that the DMZ agreement was just another temporary deconfliction agreement of the type that the Syrians have used repeatedly elsewhere. It defused all of the noise and threats that the terror supporters were making about humanitarian issues, including Turkey. And if the Turks can implement it with less bloodshed by getting their terror proxies to cooperate. Great. If not, then the Syrian government coalition has used the reprieve to do other things, and will resolve the Idlib issue themselves if they have to.

I agree, it’s temporary. Because the Turks will purge HTS and establish a satellite state there.