On March 4, Syria’s President Bashar al-Assad told reporters that the Syrian Arab Army (SAA) will continue its military operation against the militants in the East Ghouta pocket. The president also stressed that the SAA will also work to evacuate the trapped civilians to the government-held areas.

When asked about the Western allegation regarding the SAA use of chemical weapons, Assad said that these allegations are a part of a the Western “dictionary of lies,” and described it as a “mere blackmail” that the West resorted to strike the SAA.

“Certainly, the West is working from the very first day of the war in Syria to have a justification for launching a full-scale war on the country [Syria], but I emphasize that this [chemical] weapon does not exist and that this lie or deception cannot pass,” Assad said.

The president went on and described the US-led coalition as “ISIS’ air force” and questioned its war on the terrorist group while answering another question about the collation’s war crimes. Assad also accused the West of openly supporting different terrorist organizations including the al-Nusra Front, now known as Hay’at Tahrir al-Sham (HTS).

“All the masks that existed at the beginning of the war no longer exist, everyone is playing its role clearly, the West supports ISIS now, the West is defending the al-Nusra Front, and ISIS and similar extremist and terrorist organizations without any shame under titles that are no longer convincing even for their public opinion,” said Assad.

Assad’s statements confirm that the SAA and its allies are going to complete their mission in the East Ghouta pocket despite attempts to prevent this by the West and the mainstream media.

This is how a leader expresses himself, without any sign of fear and intimidation,
with a well-drawn plan, and very sure of himself.
God bless Assad and the brave and enduring Syrian people, undoing all the plans of their wicked and infamos enemies.

I have watched a few of Assad’s interviews, he seems quite soft spoken, but logical and sharp as a tack. was much impressed.

Exactly so. I just wish more Americans would watch his interviews. I think they would come away with a different view of the situation.

The western media won’t put al-Assad on the news because he is an articulate and educated doctor – this image does not conform to the ‘mad-dogs of the middle east’ easy caricatures the US has repeatedly presented of non compliant regional targets since early1980’s, of Khomeini, Qaddafi and Hussein.

Google is offereing you 98 dollars every hour to complete some jobs off a home computer … Labor for only few hours and live happy more time together with your family … Anyone can apply this specific job!last Sunday I bought a great Land Rover Defender after just making $7473 this-past/four weeks .it’s actually the most comfortable work however you will no longer forgive yourself if you don’t hop over to it.!dx523m:⇌⇌⇌ http://GoogleCoreHomeComputerJobs/getpaid/98$/per-hr… ♥r♥y♥y♥u♥♥♥e♥f♥♥t♥♥q♥o♥♥♥n♥♥d♥♥♥x♥♥♥c♥♥t♥r♥r♥♥z♥♥♥r♥♥k♥♥g♥♥♥e♥♥♥c♥p♥♥♥a♥♥♥t::!kw052q:gy

There is a line in the 1982 Midnight Oil song US Forces that goes
“Divided world the CIA, who controls the issue”
That’s the key, they control the media, so few westerners know the truth.
The Internet is the only medium they don’t control, but they are working on that.

So is my friend, and in the end Assad turned out to be a bone something hard to chew
by the decrepit wolves of the west.

It is also impressive how very much under control and calmly he reacts when confrontend with one blatant lie after another by reporters which are not uncommonly very much in love with themselves. He even lets them finish their pointless accusations. I don´t know whether I could stay that calm.

There are no such thing as ”War against terrorists” But there is opponents with different opinion then yours and perhaps even different goals. The US invented this thing called terrorism and in all reality it’s only the sheep who believe in it.

The truth is there are no terrorists in Syria nor anywhere they are said to be. There are however rivals and people who probably have different opinion and different goals and to put it short basically a rival to your agenda.

Assad is basically being a parrot here and using an outdated card.. It’s like drinking milk that has expired years ago it’s bitter and dosen’t taste anything but bad. This is what it makes assad comes off like an expired individual. Someone who lives nearly 2 decades ago

Best to ignore the babbling buffoon.

What a dumb Troll you are. A slave to your stupidity. “What’s in a name?
That which we call a cretin. By any other name would still reek of
stupidity.”

no my friend, we must to read his answers and comments, he is the perfect example of usa point of view, we need him to explore their ambitions and goals

This is what happens when a troll has no brains at all.. Did trump replace your brains with his smelly shit ?

OK… than why USA is still having a war in Afganistan? What USA is doing in Syria?

We all know the truth… the neoliberal quest for global full spectrum dominance and a general desire to destroy and humiliate anyone who dares resist them.

Yes, we do but it was funny to see what that guy posted. He alwasy advocated US’s “war against terrorism” and now he claims there are no terrorists, only “opponents with different opinion” :)

He’s a Muppet, a cretin and a half arsed troll

opium is the answer

Waiting for Israel to tell it what to do.

“There are no such thing as ”War against terrorists” But there is opponents with different opinion then yours and perhaps even different goals. ”

Remember AQ? They were the land redevelopment specialists who initiated a mass urban renewal of Manhattan back in 2001…. But sure, lets just accept they are not terrorists…

You are the worst of all trolls shlomo . . a low I.Q. welfare recipient who has been hired by the state to produce these insipid boiler room comments. If there are no terrorists in Syria, please go there for a vacation. It’s not that far from Haifa / Tel Aviv. They will receive you warmly and might even put on a little head-chopping show for you . . with you as the main event . .

You are living in alternate universe. But there is that saying about democracy: everybody has a right to his opinion, including the retarded. So go ahead.

Are you an experiment or something ???

Is this fucker saying that behead people in public squares is not terrorism???

The White House just accused Russia of slaughtering civilians in Syria. Of course American bombs only kill terrorists even when they bomb schools and hospitals and orphanages and kill scores of women, children and elderly…they were all terrorists. (Dark sarcasm of course).

Posted this about 7 hours ago on a different SF thread. Just popped up on my screen. The White House has accused Russia of
“killing civilians” in Ghouta. If it has happened and I hope that it
hasn’t. I commiserate with the victims families, However, it would never
have happened had the fucking Yankee neo-con thugs unleashed these
head-chopping mercenaries in order to get their fucking NWO. The Syrian
Government and its leader survived the initial onslaught, buckled a bit.
Got themselves up, fought back spoke with their friends who came to
their aid to try right the wrongs which were visited upon a peaceful
nation who never wanted to be in a NWO and turned into slaves and
serfs. .The Yankee MIC has been murdering 10,000 people every week for
the last 20 years and they are brass necked enough to accuse Russia of
killing civilians. Every living former Yankee President should be tried
for their crimes against humanity and Vps, Secretaries of State,
Defence, etc. Then there are the Brits, the Frogs, the Izzies and the
rest of the spineless rats, which would have to include the coalition of
the willing.

What a Statesman President Bashar al-Assad is. As cool as a cucumber while the Yanks and their acolytes slither out from their snake-pits speaking with forked tongues as they spread their malicious poison. The truth is unfortunately only known to a small minority, however, the day is not too far away when it will be revealed for all to see. Then we will have real revolutions taking place in the USA, Britain, France, Germany and the rest of the treacherous nations that aided and abetted their vile agenda.

The US is playing a strange double role in Syria, that of the arsonist and pseudo-fireman. Except in the case of Syria, the arsonist has lit the fire, then moved into a part of the building and began shooting at the genuine firemen, while still trying to rally small groups of demented pyromaniacs to continue setting fires and destroy the building so no one else can live there. . 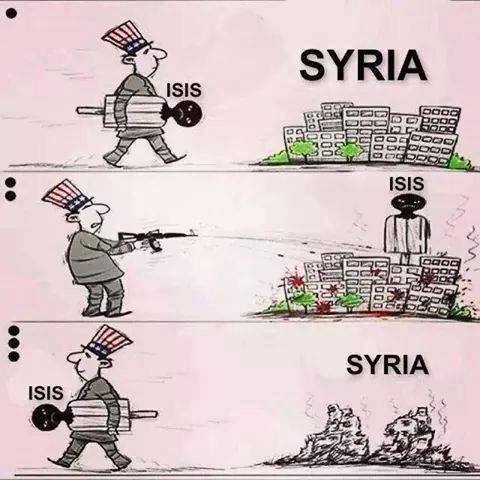