How, the Washington uses US economic power to implement its policies in Asia. 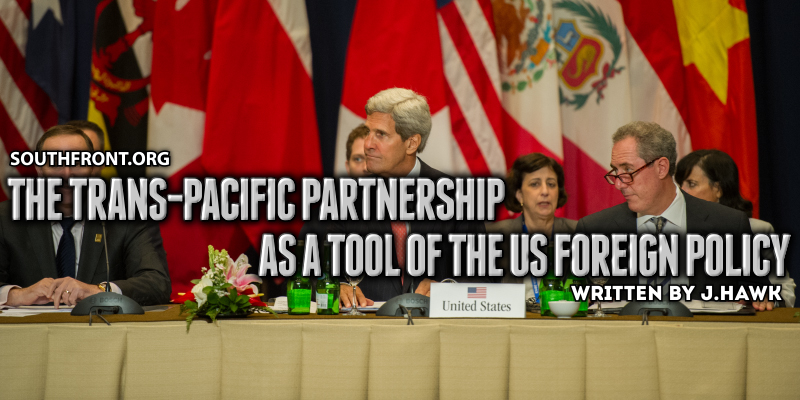 This article is written by J.Hawk exclusively for SouthFront

The renewed conflict between the Russia and the West that is manifesting itself in Ukraine as well as Syria and other places around the world also has an Asian counterpart in the form of a nascent Cold War between the West and China. However, the two conflicts should not be considered in separation as they are part of one coherent whole. They represent part of two parallel conflicts in which Western powers participate. The first is the preservation of the centuries-old Western hegemony over the international system, the second is the preservation of the US dominant role over its own supposed allies. The fact that both of these conflicts are occurring at the same time places individual countries which are ostensibly in US orbit in a difficult situation because US policies are not merely aimed at weakening the international power and role of Russia and China, but also to strengthen US control over its own allies.

In economic terms, both West and East consist of a mixture of states. While most Western powers are labor-rich but resource-poor economies heavily dependent on imports of natural resources and on foreign markets for their manufactured goods (Germany, Japan, France, S. Korea, etc.), they also include a number of countries which are resource-rich, including Australia, Canada, and of course the United States. By the same token, while Russia is a resource-rich country, its increasingly closer ally China is resource-poor. The fact that Russia and the US are both resource-rich while China isn’t, however, has a great deal of impact on how the US deals with both countries and its allies in their politically relevant neighborhoods.

Thus, in case of Russia and Europe, the US policy appears to have as its long-term objective the subjugation of Europe through cutting it off from Russian resources by using the conflict in Ukraine as a wedge to drive between Russia and the EU. It is no coincidence that the countries most interested in introducing and extending sanctions are the ones which are either most eager and potentially able to replace Russia as a raw materials supplier (US, Canada, and Australia, though also Sweden and Norway), and countries least dependent on Russian resources (the UK, but also certain underdeveloped countries of E. Europe, including Poland).  Conversely, it is Germany, France, and Italy who are most afraid of the conflict continuing because it threatens not only to increase the cost of the resources they need but also to deprive them of the market for manufactured goods. Even as the US exports to Russia have grown since the introduction of sanctions which hit mainly the EU’s trade with Russia.

In the case of China the situation is slightly different. China, unlike Russia, is not a raw material supplier but rather a country that requires steady supplies of such resources from nearly all of its eligible neighbors, including Russia, Australia, and New Zealand. The US policy in relation to China and China’s US-friendly neighbors therefore has to follow a different strategy than in relation to Russia. It’s not about isolating US vassals from Chinese resources (since China itself lacks them), but rather to reserve that market for itself to the detriment of Australia, Canada, and New Zealand. While, ideally, the US would likely prefer to drive a wedge between Russia and China in order to restrict its supplies of natural gas and other resources to China, in practice that appears to be highly unlikely. However, since the US economic growth strategy is focused on exploitation of its existing or still-to-be-discovered natural resources, it not only puts the US in competition with Russia over markets, it makes China the natural recipient of US resources (including food) to the detriment of such traditional suppliers as Australia. The brewing conflict in the South China Sea, in particular, is probably intended to have the effect of forcing South Korea and Japan to choose US protection (with the “price” of protection being an unfavorable trade arrangement with the US).

Therefore the US is attempting to drive a wedge between its Pacific allies and China while retaining a relatively benign relationship with that country in order to continue its own trade relations. It would appear the US is pursuing the strategy through a variety of measures. One is to increase its military presence in the region which will naturally affect local tensions and harm trade relations among the affected parties. The other is TPP, the trans-Pacific free trade area which is intended to cover the US and most of its regional allies but exclude China. The TPP would have the effect of fostering trade between the US and its allies, though at the expense of their relationship with China.

Indeed, there are already indications of resistance among US Pacific allies similar to the opposition to the US policy concerning Russia. It is evident, for example, in the ouster of Australia’s Prime Minister Tony Abbott, a staunch supporter of a militarized US-Australian posture in the Pacific and of US military presence in Australia, and the difficulty the US is experiencing in convincing even Japan to join the TPP. Furthermore, a number of Pacific countries have already joined the China-led Asian Infrastructure Bank which is an indicator they have little confidence in US motives. As well they should. The US is not the same generous ally it was during the original Cold War, when it was genuinely afraid of the spread of Communism which compelled it to boost the economies of Pacific Rim countries. There is no such ideological threat in sight today, neither in Asia nor in Europe, which means the US is far more willing to sacrifice the economic interests of its allies in both regions of the world. That is ultimately what will make the US efforts to create unified anti-Russian and anti-Chinese blocks in Europe and Asia, respectively, akin to the Cold War-era NATO and ANZUS alliances, rather unlikely to succeed.

Nevertheless, in both Europe and Asia we are seeing the spectacle of the US attempting to subjugate its “allies” by using the specter of the “Russian threat” to intimidate them into sacrificing a great deal of their sovereignty to the US. It remains to be seen whether the countries so targeted are able to resist, however, at the moment the US strategy appears to have run into serious problems, in large part due to the Russian Federation appearing as the more responsible international actor interested in preserving stability, in contrast to the adventurist US foreign policies.

Tags:asia, china, eu, russia, the us