At least it is clear; it’s explicit. The “We’re America, Bitch” formulation by an American official strips away the humbug of soft power. It’s not about ‘democracy’ or ‘freedom’: the global universal order never was. And, President Trump, to his credit, makes no bones about it: Why apologise over American power? It’s use it, or lose it – and America is still strong enough to get its way: to remain the Dominant One, he asserts. China begs to differ. It has already surpassed the US in 2013 in purchasing power parity GDP terms, and now feels history on the move: China is about to resume its former ‘self’, and standing as the primordial Culture (as it believes it always was), occupying the very middle of the world. The material articulation now, of this rediscovered ‘self’, being the Belt and Road Initiative (BRI), encompassing a ‘community of shared destiny’. But the latter’s external political expression is reflected more by the (originally) Russian formulation of ‘Eurasianism’ and multipolarity, which dates back to the 1920s.

Plainly, multipolarity stands in direct opposition to western universalism, and to ‘end of history’. It is not anti-western per se, but it is directly opposed to the western utopian projects that have attempted to slice all that is human down to a ‘single size fits all’, model society. The Russian Eurasian notion is of different cultures, autonomous, and sovereign, that precisely denies universality and hegemony, in principle. The idea rather, is of a grouping of ‘nations’, each reaching back to its primordial cultures and identities – i.e. Russia being ‘Russian’ in its own ‘Russian cultural way’ – and not being coerced into mimicking the westernisation impulse. What makes such a wider grouping feasible is that cultural identities are complex and storied; it escapes the prevailing obsession to reduce every nation to singularity in value, and to a single ‘meaning’. The ground for collaboration and conversation thus widens beyond ‘the either-or’.

President Trump ostensibly should be perceived to be in the basket supporting Italy and Europe’s cultural re-sovereigntisation – at least this is what Steve Bannon suggested after a recent visit to Italy, where he soughtto present the new Lega/M5S Italian government as the embryo of a nascent pan-European uprising, against the liberal-progressive (globalist) Establishment. Bannon characterised this ‘embryo’ as a “pivot to Trump”. A Russian thinker and author, however, also visiting Italy at the same moment, saw Italy’s new orientation quite differently – as the seeds of this multipolar, Eurasian ‘idea’ emerging in Europe.

It may be true that Trump is committed to blowing over the Liberal European ‘world’, as Bannon contends, but the deep paradox here is that the US President seeks to achieve its deconstruction, and to restore American raw vigour, through using the very tools first developed by the Liberal Establishment for making the US-led, globalist world. There is a basic contradiction to being against the Liberal Establishment at home, yet using the same pernicious tools externally, to re-build domestic America. It seems the Russian visitor was closer to the mark, than Bannon on this point.

President Trump, it appears, intends to ‘go nuclear’ against China, against Iran – and (who knows), perhaps Germany too, adopting as his own, precisely the ‘ways’ of an Establishment – which Trump disdains: dollar hegemony, exceptionalist claims to US global legal jurisdiction, and the right ‘to do’ regime change (i.e. in Iran) where and when the US pleases. For many – and certainly for Russia and China – this is as much a mire in need of draining, as any Washington equivalent.

David Stockman, a former Congressman and US Budget Director notes in respect to China:

“Peter Navarro, the very architect of … trade war [has said, following a 400-point plunge in the US market index] there are no plans at all to restrict foreign investment in the US: Donald Trump only wants to safeguard American technology and foster “free, fair and reciprocal trade” … Navarro was spinning a pack of unadulterated lies. In fact, with respect to investment restrictions, the Trump Administration is fixing to activate an obscure and rubbery 41-year old statute called the International Emergency Economic Powers Act of 1977 … It will be used to block prospective investments in “industrially significant technology” by companies which are 25% or more Chinese owned.

Needless to say, that will open a bottomless Pandora’s box for Washington intervention and meddling in virtually any China related business deals outside of the buggy-whip industry. The implication is that the Donald is setting up an Investment Czar to stop Americans who own technology from selling it to any foreign party – not just the Chinese, according to Secretary Mnuchin – if some pointy-headed GS-15 deems it to be a sensitive technology.”

And in respect to Iran,

“In the view of veteran observers of the oil industry”, writes Esfandyar Batmanghelidj, Trump indeed “has ‘gone nuclear’. Speaking during a background briefing on Tuesday, a senior state department official announced that the Trump administration wants to completely eliminate imports of Iranian oil by its current customers. The official told journalists that, during a tour of countries that has already begun with a visit to Japan, US officials will be “requesting that their oil imports go to zero, without question.”

This Treasury War is already causing pain in China (see here – where a Chinese think-tank warns of potential financial panic), and the US campaign to halt completely Iranian oil exports, of course, will adversely affect Iran – even if China and India disregard US secondary sanctions, and continue to purchase Iranian oil (as they may). It seems that the US is doubling down, and the only thing that may cause President Trump to think again is if there is a substantive fall in US markets of 9% or more on the S&P (see here), in the run-up to the US November midterms.

Against this background of Trump ‘going nuclear’ on China and Iran (two of Russia’s key allies), Presidents Trump and Putin are scheduled to meet on 16 July, in Helsinki. We do not know the agenda, but the speculation that the key transaction will be that of Trump seeking Russia’s facilitation for his ‘the Deal of the Century’ – in return for a broader Syria understanding between the parties – seems plausible. Such an American ‘concession’ over Syria is an easy ‘give’ for Trump – It amounts to little more than a recognition of the reality, simply that the R+6 forces have won the war. Even the US beltway, tacitly concedes that this is the case.

The constituents to the ‘Deal of the Century’ remain unknown, and Russia’s final attitude to it, therefore is unknown too. But generally, in advance of its publication, Russian diplomacy has been wary, and suspicious, on the basis of the titbits that have leaked (the Russian Foreign Ministry was wholly in the dark earlier this year). Lavrov and Bogdanov both have expressed the view that the US position on Jerusalem dangerously exacerbated tensions across the Middle East.

Likely, Moscow will have reservations about any agreement that manifestly fails the test of garnering Palestinian acceptance, and will not want to be seen to be a party to imposing an outcome on a defiant Palestinian population. More seriously, Moscow may worry that if the US proposals are rejected by the Palestinians, the Israeli leadership will simply ‘pocket’ any merits for Israel, ignore any earmarked for the Palestinians, and simply annex more land. This may create instability across the region, or ignite violence. Possibly both. In short, it is not an easy commitment for Russia to undertake.

If President Putin is asked simply to invite and urge PM Netanyahu and Abbas to attend the World Cup concluding ceremony on 15 July, so that they might meet there – that should not pose any problems for President Putin, even if he might be sceptical that Abbas would agree to meet Netanyahu. Abbas knows the mood on the Palestinian street is wholly hostile to what they understand to be the outlines of the US proposals, and especially to any suggestion at all that Jerusalem not be the capital of the Palestinian state.

What else might President Trump ask of Russia: that it compel Iran and Hizbullah to withdraw wholly from Syria (as Israel demands)? It simply would not be possible for Russia to offer such a commitment, nor could Preswident Putin practically enforce it.

Might Trump ask Mr Putin to sever relations with China and Iran? What? Throw over two strategic multipolar Russian allies – in order to cast Russia’s lot in with the US unipolar hegemon? That would be a strange choice.

And what might Trump offer Putin? Talks on de-escalating a new weapons race? No problem. An end to sanctions on Russia? No way: it is Congress that controls American sanctions – and its penchant is for increasing them, not reducing them. A solution to Ukraine? Difficult.

If the room for substance is really not so great, is there any point to the meeting at all? Well … Yes, it delivers a kick in the pants to the Anglo-Establishment that has put every obstacle in the way of such a meeting. Both Putin and Trump may draw some considerable satisfaction from this point alone. Maybe too, Putin will be able to give his fellow President an insight or two – especially on Iran (to set against Trump’s top national security and foreign policy officials’ jaundiced view of the world).

These are the Ingredients for attacking countries they HATE; Ingredient for a COLOURFUL, COUP AND ILLEGAL OCCUPATION.1. Demonize the Government 2. Pay protestors to destroy government property and refer to terrorists assets/proxies eg MEK led by Maryam Rajavi as “moderate rebels”/ oppositional forces” 3. Run the Propaganda campaign on social media 5. Interfere with the constitution of the OPCW SO, they can blame said country eg Iran without awaiting EVIDENCE evidence 6. Do chemical attacks False Flags. 7. USE FAKE DISTURBING photos recycled from last operations in Libya/Iraq/Afghanistan etc to elicit cooperation from the world 8.Then BOMB countries without any UN consent.=COLOURED COUP in Iran; All coordinated between UK Foreign Office/BBC/US STATE DEPARTMENT/US Embassy/USAID/CIA/MOSSAD agents.

9. Explain that these actions are absolutely necessary for humanitarian reasons.

Those of us who deplore the US Empire of Chaos and Usury can be consoled that ever since man walked this earth ALL Empires, big and small have rotted in their own exceptionalism.

The United States of America will also wither away or be consumed in wars that they cannot win.

“… ALL Empires, big and small have rotted in their own exceptionalism”
Yes, but it happened in BLOOD and suffering for the Crowds:
“When the rich make war, it’s the poor that die”
__ Jean-Paul Sartre 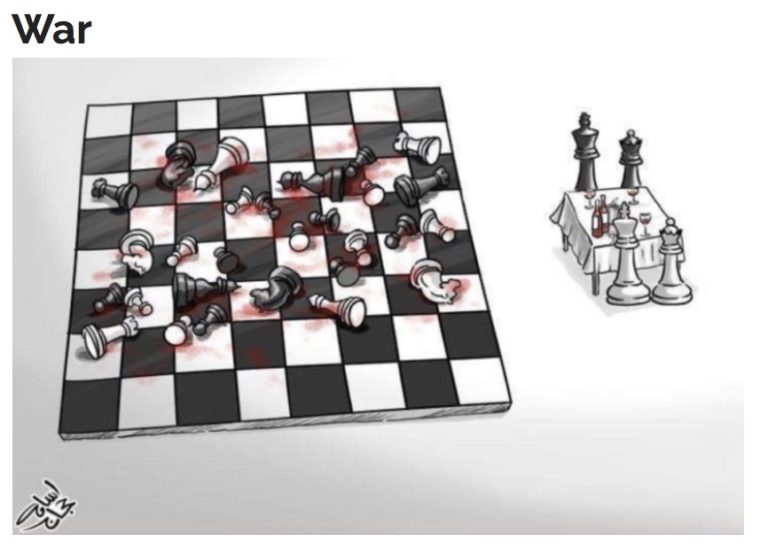 Yes, I absolutely agree.
The chessboard image you show is a very potent one.

Why does a deal with the U.S. have to include at least 2 possibly 3 losers, why can’t my country act like a normal country?

It’s not as if Russia, China, Iran, the Palestinians, Yemenis, or Venezuelans pose any threat to the U.S. We just can’t feel good about ourselves unless we are grinding someone into dust. It’s really pathetic. The world must tremble at the sight of the U.S. or there is hell to pay.

Well…I clicked the click bait title. By the fourth paragraph I have concludes that the author is flailing about, tossing together sentences (much like a salad) to foment and disturb the deepest gizzards of the reader.

Is it
“TRUMP ‘GOES NUCLEAR’ AGAINST IRAN AND CHINA, WHAT’S NEXT?”
intelligent headline or maybe not?

” As Trump ‘Goes Nuclear’ Against Iran and China, What’s Next? ”

This guy is dvmber than Boris Yeltsin and Dubya-jr taken together:)
“Goes nuclear” :)))))) Well… Russia is missing on the list and he has all he needs to f*ck up his Yankee-Empire: 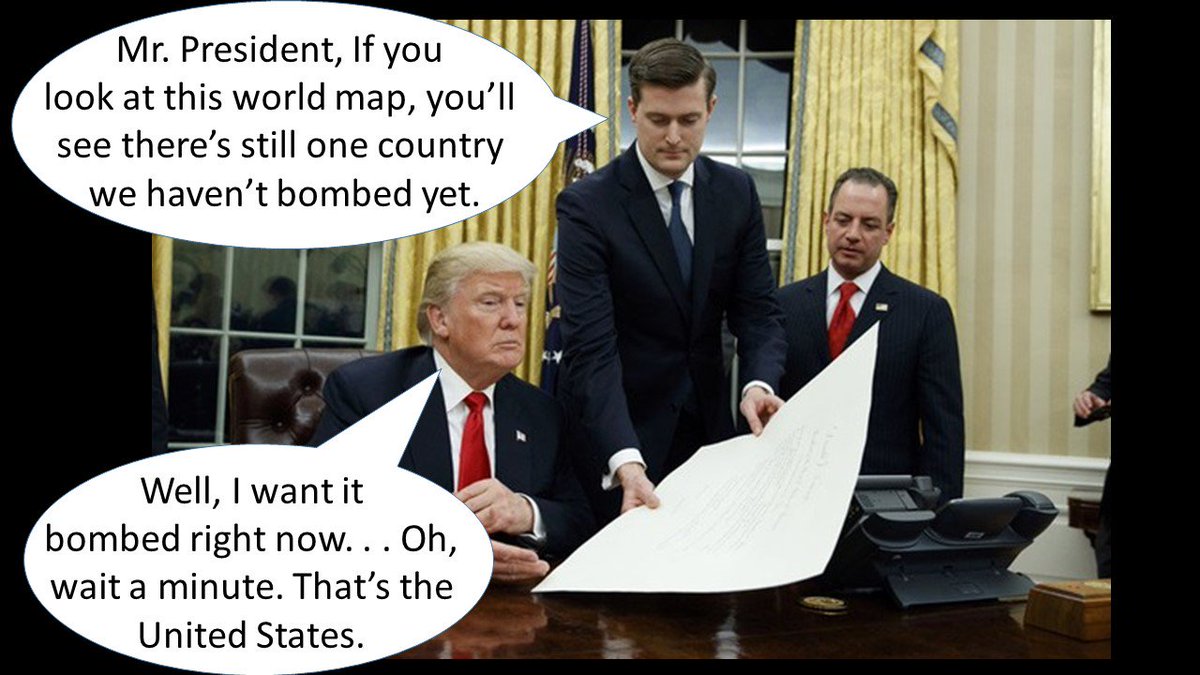