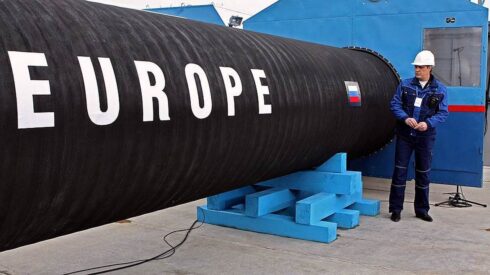 Although today was the deadline for EU diplomats to determine the specifics of the Russian oil price cap, we pointed out earlier just how “great” discussions were going with Poland rejecting a proposed cap of $65 per barrel as being too soft, while Greece refusing to consider anything below $70.

EU oil price cap discussions going great: Poland rejected proposed price of $65 per barrel as being too soft, while Greece doesn’t want to go below $70.

Meanwhile, amid the growing discord, in typical European fashion – where nobody has even looked at the math ahead of time – the entire concept of a price cap was clearly meaningless as explained in “The Ridiculous Reality Of The Russian Oil Price Cap Debate In One Picture.”

Which is why it wasn’t at all surprising that on Friday, European Union diplomats suspended talks on capping Russian oil prices, as Poland and the Baltic states objected to a proposal they consider too generous to Moscow.

Confirming none planned over weekend. Nonetheless a variety of EU sources still think a deal will come in the coming days.

As Bloomberg reports, diplomats had expected a deal to be done on Friday night but positions remained entrenched and the talks were postponed to Monday.

they need 48 hours to learn math

As previewed earlier this week, the bloc has been locked in a fight over how strict the Group of Seven-led price cap should be. Poland and the Baltic nations are outraged at a proposal to cap Russian oil prices at $65 per barrel limit, as the level is above the rates Moscow sells crude now, making the entire price cap discussion completely meaningless and purely an exercise in virtue signaling.

Poland is demanding additional sanctions, a review mechanism, and a price below the market level, according to a senior diplomat. 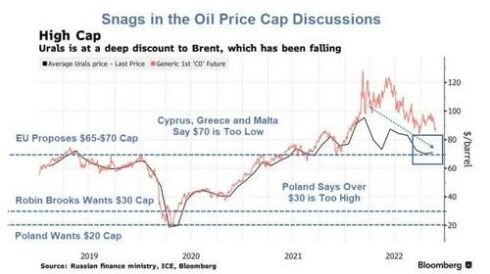 And as always happens when Europe has to reach a unanimous decision, with Poland and the Baltic states digging their heels in, the spat has laid bare the fundamental tension at the heart of the price cap idea. Countries are being forced to choose between two priorities that are almost impossible to resolve: trying to choke off revenue to Russia and avoiding potentially painful spikes in the oil price that could damage the global economy.

“If you put the price cap too high, it doesn’t really bite,” European Commission Vice President Valdis Dombrovskis said in an interview on Bloomberg TV. “Oil is the biggest source of revenue for Russian budget, so it’s very important get this right so it really has an impact on Russia’s ability to finance this war.”

On the other end of the spectrum from Poland are shipping nations like Greece, which favor a higher level that will help keep trade flowing, and boosting state revenues derived from quietly helping Russia break the oil embargo by turning a blind eye to an entire industry of ship-to-ship transfers that has taken Greece by storm.

The talks have been fraught because at $65, the cap is above the prices that Russia is already accepting for its crude from ravenous buyers such as China and India – a level which is heavily discounted to global benchmarks.

Such a “cap” would allow Moscow to argue that it’s business as usual; at the same time, the Kremlin had said it would refuse to sell oil to anyone signing up to the cap – but on Thursday appeared to hint it could soften its stance.

Still, Europe can only kick the can so long: the Dec. 5 deadline is looming, at which point EU sanctions on Russian oil are set to kick, and the disruption to the market will likely be greater if the price cap isn’t in place as all Russian oil exports would be suspended, unless of course Europe stops being a vassal state of the US State Department and decides to do away with the Russian sanctions entirely (for an objective assessment of who holds the upper hand in Europe, read Ambrose Evans-Pritchard with “Putin has another gas shock for us: the deindustrialisation of Europe “.

The EU sanctions would bar access to insurance and services for any ship transporting Russian oil. The cap allows access to those services, but only if the crude is purchased below a certain price. The US proposed the price cap earlier this year as an alternative to EU sanctions that were so strict they risked shutting down swaths of production.

The US argued that a spike in prices caused by EU sanctions could eventually help Putin — as well as being ruinous for the global economy.

Oil prices have fallen in recent days, partly on signs a deal could keep Russian oil flowing, easing the pressure on the global market. Then again this is Europe, and anything that is seen as a consensus outcome will never happen…

Bourla is directly responsible for more deaths of israelis than all the terrorist attacks put together over the past 75 years. Mothers are having stillborn dead children there too. Israel needs to arrest him and bring him to Jerusalem for trial for crimes against humanity and genocide. Truth must be told.