Ever worried that you may have made a mistake or tactical error? No doubt, but next time stop and compare the situation with that of Pyotr Pavlensky. Having nailed his balls to Red Square and climbed onto the roof of a psychiatric clinic naked in order to chop off his earlobe; one would think he would find it difficult to take his self-destruction to a next level. But Pyotr has outdone himself by setting fire to a door of the FSB headquarters, whilst accompanied by two journalists to take photos of the arson attack. The following article originally appeared in RT:

`Performance artist from St Petersburg, Pyotr Pavlensky, has set fire to one of the entrances to Russia’s Federal Security Service (FSB) building in Moscow to protest its “never-ending terror”. The artist was quickly arrested and is now facing vandalism charges.

Pavlensky showed up at the FSB headquarters on Moscow’s Lubyanka square in the early hours of Monday with a canister of petrol. He was accompanied by two journalists, who were also taken for questioning and later released as witnesses.

Pavlensky splashed petrol on one of the historic wooden doors of the building, then used his lighter to set fire to it. No significant damage occurred as the fire was quickly extinguished.

The shock artist later posted a video of his nocturnal doings explaining his actions,

“The burning FSB door is a gauntlet thrown by the society in the face of danger of terrorism. The Federal Security Service functions by means of never-ending terror and holds power over 146 million people,” he said.

The fire was quickly extinguished and Pavlensky was arrested and questioned. Police have launched a criminal investigation into the act of vandalism. If found guilty, Pavlensky could spend up to three years behind bars. 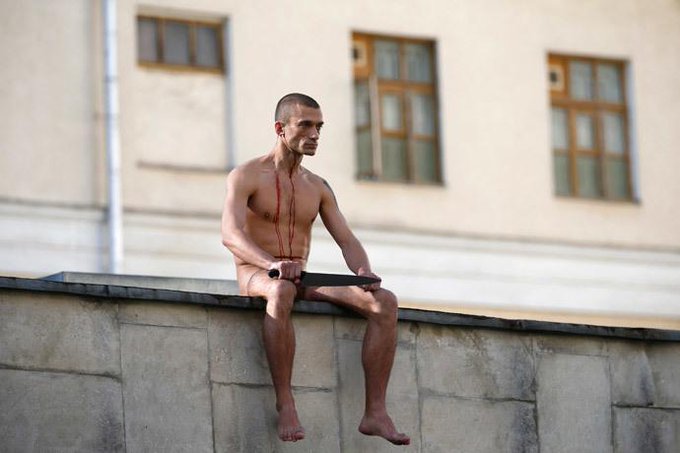 Pavlensky has made the headlines before, for performances blasting the country’s “repressive regime”: he wrapped himself, naked, in barbed wire in the middle of St Petersburg, and nailed his scrotum to the Red Square in Moscow.

In 2014, Pavlensky was charged with vandalism for building and consequently setting fire to mock barricades made out of tires in central St Petersburg.

In 2012 he sewed his mouth shut to support fellow performance artists ‘Pussy Riot’.

In autumn 2014, after publicly cutting off a bit of his ear, he was ordered to undergo a psychiatric inspection. The examination found him in perfect psychological health. According to his lawyer, it was his 6th mental state check-up – and in every single one he had shown good results.’ (Introduction by Nenada)