The Iraqi military has foiled a rocket attack on еру Ayn al-Assad airbase in the western province of al-Anbar, where hundreds of U.S. service members are stationed.

According to Brigadier General Yahya al-Rasul, a spokesman for the Iraqi Joint Operations Command, a unit of the army’s 7 Division found three Grad 122mm rockets, which were attached to a timer, in the area of al-Dulab. The rockets were directed towards Ayn al-Assad airbase.

“The unit was able to stop the timer only 15 minutes before the launch,” Gen. al-Rasul said on February 2. The attack was likely planned by the remaining ISIS cells in al-Anbar. The terrorist group launched several attacks on Ayn al-Assad in 2014. However, the Iraqi military and the US-led coalition managed to fully secure the strategic airbase by 2015.

Last December, U.S. President Donald Trump made a surprise visit to Ayn al-Assad airbase to celebrate Christmas with American troops there. The visit was widely criticized by Iraqi politicians and activists because Trump didn’t meet with any senior Iraqi official.

Some disgruntled ISIS running around Anbar province?
Ayn al-Assad airbase is huge, also home to elements of Iraqi 7th div.
When ISIS held the Euphrates area years back, they where never able to get close to it. The 7th did their job well. 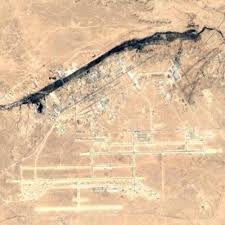