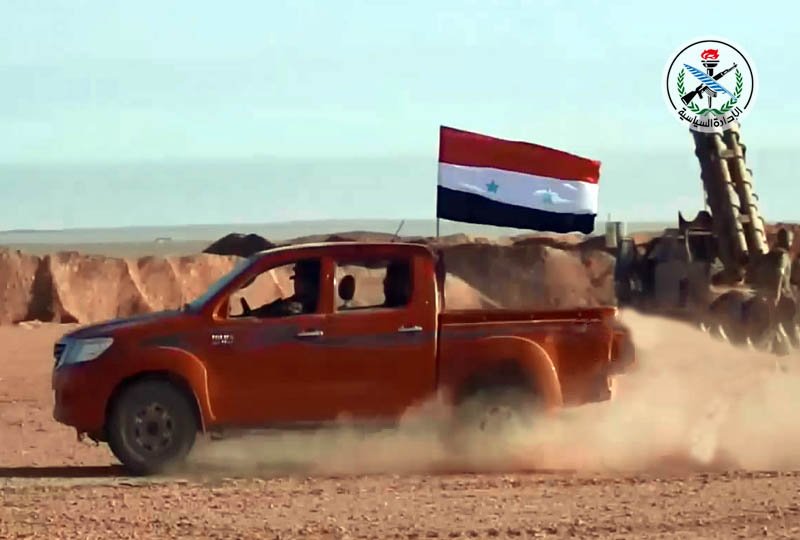 Units of the Syrian Army and its allied forces have liberated 100 km2 from ISIS terrorists in the countryside of Palmyra in the province of Homs, the Syrian Defense Ministry said in a statement on June 13.

According to the statement, government forces have successfully advanced northeast and south of Palmyra inflicting a notable damage to the ISIS manpower and military equipment.

Now, government forces are storming the area of Arak and developing momentum in the direction of the T3 airbase.

Nice development but still we didnt know about yellow, for black and green thats the end of them especially black……lets paint syria red again

If true, that would be impressive.

Sorry, my map was from 5 days in the future. ?. This map i sent 5 days ago is corect from today…

Good work by the Syrian Military. There’s no mention of Arak and T3, have these been taken?

Some facts why Syria is in this situation regarding Palmyra.

The Russian air group allowed approx 4500 terrorists to capture Palmyra v2 by driving unhindered across the desert from Mosul region into Syria in December 2016.

The 4,500 convoy of terrorists would have used approx 800 vehicles, “Pickup Trucks”, 6 terrorists per truck.

Not one single truck was targeted whatsoever.by the Russian Air Group whilst the Terrorist convoy drove across approx 250+ Km of highway with no checkpoints whatsoever.

This indicates that the Russian Military is allowing terrorists to control certain areas and regions in Syria.

What about the Americans? both countries (in theory) possess sufficient intelligence and satellite technology to address issues of this magnitude. I think leaving aside the conspiracy theory Russia simply doesn’t have enough Military resources to cover the vast Syrian Desert.

The maps showing where ISUS was*…The ISUS were never really in numeric to hold such territory. Their power is declining fast as towns and tribal groups have the word ISUS is running away, Making deals to run. SAA and allies will continue to make large area advances. So far….US with their FSA Slaves have not occupied T2 Airport to my knowing. That was a concern they could occupy T2 abd pull another 50 klm exclusion Zone con….bomb everything SAA or Shia Militias bring up towards Deir Ezzor City and South. It’s possible Empire has conceeded this recent round of the Old Masonic game. They will occupy and influence Via Kurd lands and whatever FSA turf they can hold. Iran’s Offshore Banking Mullahs know all this is moving towards broader war with Iran. Qatar and possibly Kuwait signaling they want to be in Iran economic sphere Is players choosing which side of the game they risk with. Empire attacks via proxy and direct,…with global media and what’s left of global law Being manipulated. Nations are forced to play,…it gets serious…as Libya is example FSA and Kurd have signaled that Shia Militias are threat and will be attacked. The game in Syria will evolve this direction. Israel is also forced to play….they will tantrum like a child,…thinking they are the Controller side. At some point in the future. ..Israel will see Lebanon 2006 with greater influence Against them. The Masonic game has burned Europe down in 2 World wars, Pitted North against South in US Civil War. Masonic Lodges started the US Revolutionary war. https://www.corbettreport.com/interview-1160-james-perloff-on-the-false-flag-heard-round-the-world/ History sold to the public is Victor write the History and deceive as to workings.

Qatar is interested in exporting their oil and gas which cannot go via Qatar – Saudi – Jordan – Syria – Turkey route because of Russian’s blocking move in Syria.

The Qatar – Saudi – Iraq – Turkey route cannot be used because of the Kurd blocking move.

The next best thing is for Qatar to work with Iran to get their oil and gas via a Qatar – Iran – Turkey pipeline.

This is the reason why Turkey is on Qatar’s side.

The UK has also shifted to Qatar’s side.

The US/Israel plans for Syria,Iraq and Iran are reasonably evolving to ? IE. ..Assad must go and certain pipeline routes becomes. …. ?

The chaos on the ground suggests no pipeline routes are going in anytime soon. A larger scale war with Iran is possible, …with Suez and Persian Gulf traffic under Military security… Ban on shipping,….Shipping Insurance goes thru the roof. Market speculation on resources.

It’s in Russia’s interest the ME not be a secure energy provider to Europe. To Eurasia/Asia is OK. Qatar possibly going over to Non US/British security /energy signatory Adds to the decline of USD $ and oil …. Russia’s Central Bank remains Rothschilds. ….suggesting Rothschild is playing Both sides as Eurasia /OBOR increases it’s world leverage vs the decline of Empire.

Brad Isherwood You make a lot of good points, there is too much to answer. So mainly Qatar.

The Sputnik article is good regarding controlled chaos in the ME which will now include Qatar and Iran.

Qatar is making good money on LNG exports so its better to meet Saudi demands and be a normal GCC member rather than embroil with Iran and face chaos or war with the Saudi – GCC Terror Axis.

If Iran falls into chaos it will cause the fall of Mr Assad’s government and allow the Arab – Turk takeover of Syria, pipeline will be built.

Russia has plenty of Military resources available which sit idle gathering dust or getting polished without being used. Or maybe as Solomon Krupacek says Russian equipment is mostly useless.

Regarding monitoring the Syrian Desert, this can be done by use of drones which are low cost and have low running cost.

The drones fly backwards and forwards over the desert highways monitoring the traffic and sending video to a command center in a safe area.

If there is any suspicious traffic, example 800 pickup truck convoy then air fighters are sent to investigate or deal with the threat. Which as you know is not being done.

Intel Communication has been one medium Russia has to give Syria and it’s Shia Militia Allies zenith real time information. Ex…US Combat aircraft from Jordan,Erbil – Iraq,Incirlik, … Russia could send warnings to Syria and allies of possible threat to their forces. This Intel competition has been key in ISUS/FSA-TAKFIRI kook gangs knowing who To hit where and when to move. I would agree that Russia has controlled the Tempo of operations in Syria since 2015. For me….Russia not willing to put Airborne divisions in back in 2015 was red flag The expanse of Syria with limited Roads and having ISUS/FSA already overrun Syria’s borders. ..as SAA lost the Iraq border in 2015. That to me indicated the conflict would be slow March….high Attrition rate on SAA,allies and their military equipment. US stuffing TOW and MANPADS in with little response from Russia signaled the Conflict would continue in high attrition ratio. Russia’s MIC is playing the game just as US/Euro MIC.

You need to do much more research and catch up before spouting such unrealistic BS. Look at the map: https://cdn.almasdarnews.com/wp-content/uploads/2016/12/Cz1fCUsWQAArweB.jpg

During December 2016 and consider the other actions taking place such as in Aleppo which was urban war fare street by street in a very large city. It has become very apparent that minds smarter than you or I have engaged and turned what was a hopeless situation employed by some of the wealthiest and powerful countries and intelligence forces in the world.

George King Yes agree with you.

I believe those desert areas the 4500 terrorists were crossing (from Mosul / Iraq, Raqqa & Deir Ez Zor towards Palmyra were under air surveillance by the coalition forces (US, UK etc)?? Russia was nowhere near I seem to remember Russian and coalition air forces each tried to keep to their sides, apart from that, the Russians were busy assisting the SAA in Aleppo in their final phase. Also, as you might well remember, as soon as the Russians came to support the SAA back in 2015, they immediately got rid of the rolling ISIS oil line between Iraq/ NE & E Syria towards Turkey, whilst coalition forces watched the oil moving to Turkey without a bat of an eyelid??

What part did you forget about the coalition forces?

They are Syria’s enemy, they cannot be trusted, they are the “Terror Axis” countries.

After 75,000++ air sorties by the US, UK, France, NATO, Turks, Arabs, etc., with precision guided missiles, IS are still in place, trained, armed and logistics supplied from the “Terror Axis” countries.

Anyone watching BBC TV News or Sky News in November / December 2016 was regularly informed 2 to 3 weeks prior that the US kept the road out of Mosul to Syria open so IS could flee into Syria.

Russia and Syria should have been watching all the roads into Syria.