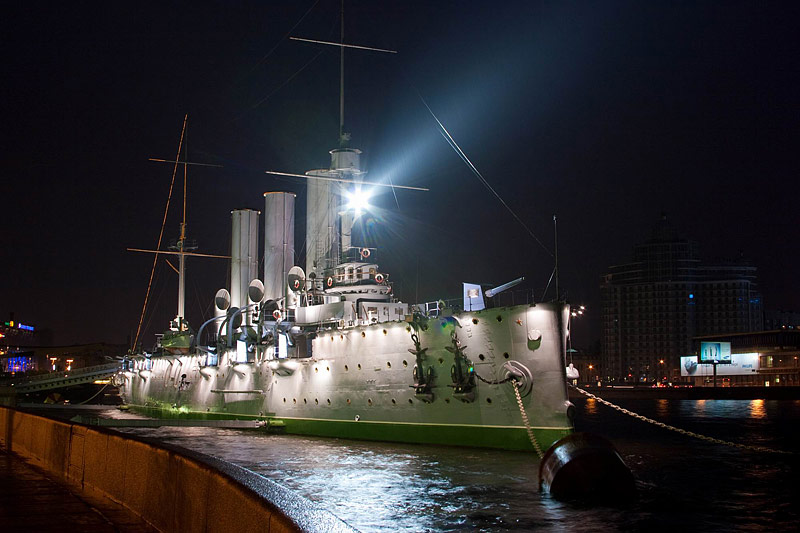 The legendary armored cruiser Aurora will be returned to its historic place to the Petrovskaya Embankment in St. Petersburg in the night from 15 to 16 July, the TASS news agency reported, citing representatives of the Kronstadt Ship Repair Plant.

According to the press service of the plant, as of today, the cruiser is almost 100% ready; work is completing, and the official ceremony of the handover to the Russian Navy will be held on July 15.

“On the next day, on July 16, residents of St. Petersburg will see the armored cruiser at the place of its historic parking. Now the preparatory works are holding there,” representatives of the Kronstadt Ship Repair Plant said.

Currently, Aurora is situated at the landing pier of the Kronstadt Ship Repair Plant. Repair work, which began on September 21, 2014, is ending now.

The city has provided the Ministry of Defense of the Russian Federation with 127 square meters of the riverfront. This area will be used as a harbor for the armored cruiser Aurora for the next 99 years, the Russian Weapons information website reported.

Aurora is a 1900 Russian protected cruiser, currently preserved as a museum ship in St. Petersburg. Aurora was one of three Pallada-class cruisers, built in St. Petersburg for service in the Pacific. All three ships of this class served during the Russo-Japanese War. Aurora survived the Battle of Tsushima and was interned under US protection in the Philippines. One of the first incidents of the October Revolution in Russia took place on the cruiser Aurora. In 1922 Aurora returned to service as a training ship. Assigned to the Baltic Fleet, from 1923, she repeatedly visited the Baltic Sea countries, including Norway, Germany and Sweden. On 2 November 1927, Aurora was awarded the Order of the Red Banner for her revolutionary merits. During the Second World War, the guns were taken from the ship and used in the land defence of Leningrad. The ship herself was docked in Oranienbaum port, and was repeatedly shelled and bombed. On 30 September 1941 she was damaged and sunk in the harbour. In 1944 Aurora would, despite the vessel’s state, become the first campus and training vessel of the Nakhimov Naval School. After extensive repairs from 1945 to 1947, Aurora was permanently anchored on the Neva in Leningrad (now St. Petersburg again) as a monument to the Great October Socialist Revolution. In 1957 she became a museum-ship. On 22 February 1968 she was awarded the Order of the October Revolution, whose badge portrays Aurora herself.