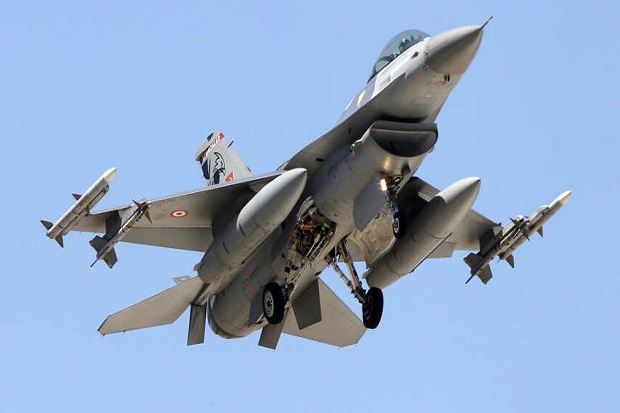 On midday September 30th, the Armenian Defense Ministry spokesperson Shushan Stepanyan said that Azerbaijan had employed Turkish F-16s in the NE and then S directions of the defense line.

Today, the enemy employed Turkish F-16s in the NE and then S directions of the DA. At this moment, intense fighting continues along the entire battle line. The DA has noticeable achievements in several directions. Manpower & military-equipment losses of the enemy are increasing.

She also reported that the Defensive Armenian army had achieved significant success in various directions.

This goes directly in contrast to the claims on September 29th, that Turkish F-16 fighter jets had already been deployed on the battlefield and had even downed an Armenian Su-25.

As such it is unclear if these reports are also accurate, since it wouldn’t be the first time.

Earlier, Armenia reported that it had downed a helicopter, but used a fake video to prove it.

Separately, the Azerbaijan side released several videos showing its successes against Armenian forces.

The video below shows a strike, in the aftermath of which at least 13 bodies can be counted.

Armenian artillery shelling the positions of our units was destroyed by Azerbaijan precision fire, according to the video.

Video footage of enemy military equipment destroyed in the morning of September 30th.

Finally, the Armenian side released a hype video that they would win the war.

“I declare to Armenia and Armenians, France will play its role.”

“I regard Turkey’s political statements as thoughtless and dangerous,” Macron said at a press conference in the Latvian capital Riga. “France is still extremely concerned about the” bellicose “statements that Turkey has made in recent hours, convincing Azerbaijan that it will recapture Northern Karabakh, and we do not intend to put up with this,” he stressed.

“I declare to Armenia and Armenians, France will play its role,” Macron stressed.

The qualitative advantage is so obvious from the videos. Apparently informational war has a result already.

Where do I see that “FRANCE PLEDGES SUPPORT TO YEREVAN?” It is Armenian propaganda. If that happens, Turkey will hit anyone head-on. Another NATO partner, so be it.

France will never play any military role. Azerbaijan has international support to take back its territory and kick out the aggressor.

What did France do when Armenia occupied several province of Azerbaijan? France did nothing.

France pledges support to fried frogs. Now Macron is talking about starting an investigation to verify if Azerbaijan really started all this.

Come on, this is what you say when you don’t have a pair to get into the arena. Erdogan will be emboldened by this frog charade and will start to press hard against Greece too.

If France and friends really mean business, it is time to start bombing the shit out of Turkey. Obviously it will never happen and, one day, we will wake up with turkish troops in Rome!!

Someone is crying foul. Azerbaijan has too much airforce. All those drones are killing us. Help! Help! Help! My Russian brothers and my French brothers…..

Turkey is committing another modern genocide in 21 century again!

Cry! Cry! Cry! My men are dying and dying quick…

I like those tank buster drones. So easy to take out those tanks and artillery pieces. We can see clearly those soldiers and the dead ones after strike. Those videos are real. Not like the Armenian video, which look just fake.

With the war going this way, there is no way for Armenians to fight. Just surrender yourself and go back into Armenia. Return N-K back to its rightful owner. Get the refugees back to their homes.

Time to die you terrorist scum !!! No one here supports Azerbaijan !!! GLORY TO ARMENIA !!!

The Objective
Reply to  James Adams

There are many supporters of Azerbaijan. Just that we don’t comment much. We’re really enjoying the show. Someone called Turkish drones inferior. Well, Ask the soldiers who’re lying dead from those drone strikes.

The beginning video, the bird and the music is like copycat of Game of Thrones video. It just makes me sick for its plagiarism.

There is no single thread stating that France pledges support to Armenia. Fake and day dream….

Armenian Defense Ministry spokesperson Shushan Stepanyan said that Azerbaijan had employed Turkish F-16s in the NE and then S directions of the defense line.Madam,please change your Cpu,we are living at internet era,anyone can control F-16 existence from flightradar24.com…Bad acting can’t be helped if the lie is terrible..

She is not even good at lying….

I dont think open source flight tracking works if the aircraft flies with transponders off, correct?

BTW I do not believe the Armenian claim that Turkish F-16’s are involved, the Armenoid depressed secretary has already been caught in one obvious lie regarding the downed crop-duster they said was an Azeri military helo.

In fact it doesn’t work at all. There is no way to know when/where a military aircraft is in the sky. Other than having access to military radars obviously.

Military air traffic can be tracked by civilians if the aircraft has ADSB-out functioning; of course this can be disabled by the pilot, so as they say, absence of evidence is not evidence of absence…

you don’t go to bomb a city with your transponder on!!

also, some military aircrafts are stealth and cannot be seen by civilian radars

I was addressing your incorrect statement “There is no way to know when/where a military aircraft is in the sky. Other than having access to military radars obviously”

Your poast is disinformation; military air traffic CAN be tracked by civilians without military equipment. You should suffer correction with dignity instead of chimping-out. Thanks.

except the context is the war in NK

France has voiced verbal support, but is not in a position beyond that. Turkey has already condemned the French announcement.

French President Emmanuel Macron on Wednesday condemned what he called Turkey’s “reckless and dangerous” statements backing Azerbaijan it its bid to take back the breakaway region of Nagorny Karabakh.

You know what Macron done one of Turkey’s air defense in Libya, Macron is silent, compared to Erdo bark, bark and bark until now.

I know Putin wants the global Ziocorporate terrorists as business partners for Russia, but he should be reminding France that Armenia is no place for the French or any Western Ziocorporate regime to be antagonising Turks for any reason, would also serve to remind the Armenian pro-EU regime that their defense depends on Russia, not EU Zioterrorists, which would get lost in the Caucasus mountains long before they can even reach Armenia to aid the regime they and the CIA helped install.

Iran is arming Armenia, we’re arming Azerbaijan. Wherever the mullah operate, we will operate against them.

It is amazing how much the mullahs regime fears the secular Shiite neighbor from the north.

Russia is Arming Armenia. Not Iran? You really think Turkey and Azerbaijan will support an Israeli state? really?

Armenia will win this war and they will remember who armed them. Your time is coming.

Doesn’t matter, in an amount of years you all will burn in hell. Then you will remember how you fucked up this world, but there nobody there will give a damn about you crying “holocaust”.

It’s not against Armenia, as I have explained. We need Azerbaijan for the coming war against Iran, they are our true enemy. I’m sorry if it hurts Armenia, but Azerbaijan and Israel have a long cooperation and I hope both countries can solve this conflict between them.

Azeris are traitrors…like turks…if u ever go to war with iran ..azeris probably will help iran instead of you…while Armenias are honorable fighters…my country is an ally of yours…id suggest you guys improve your relations with armenians and not the ORCS!

won’t happen. For the same reason the S-300 is not active in Syria.

Its active. They only dont want to risk a tactical nuke on Damascus like it happened in Beirut.

You’re a smart guy. You know exactly why the S-300 is inactive. No disrespect to anyone.

Again, turks think they will be left alone to invade another country. But they didn’t took Libya, they couldn’t drill for oil in Mediterana, the Syrian pie is shrinking and Turkey is becoming a nuisance for everyone. But in the end, Turkey will be eaten by Russia and France with the blessing of US, with some big help from the oppressed kurds living in Turkey (around 20% of the Turkey population, in fact).

Turkey is a terrorist state. Turkey = Daesh, and no doubt about this. The thing is that Armenia became a Russophobic country – blame US for that, and ask US to help now. All states suffer because of the US – nazi ukraine, russophobic georgia and armenia now.