This report of attempt to capture city Shushabad by surgery striking by drone aeroplane Bayraktar TB 2, which I telled you befour! If not gnawing where please to clickering on https://southfront.org/shusha-remains-out-of-reach-but-azerbaijan-keeps-pushing-from-all-sides/

We all very excitation at drone plan, and drawing lots to go on first drone. My dear freinds Abu Recep al Idlibistani and Abu Tayyip al Qaedi get honour of climbing first drone, and they’re eyes full of tears that must have bean of joy! Our Idlibistani jihadi so bravely that even if they lose draw of lots, like these two, they as happy as though they winned!

So Abu Recep and Abu Tayyip fixation rockets on belts, rockets fitted to wings of aeroplane drone, and then with guns in hands and headchopping knifes between teeth they take off! All of us watching as drone lift highly and higherly into sky.

But then disastrous! Somehow undoubted sabotage agent in pay of evil bearded colour revolution dictatorial Abu Pashinyan al Armeni sneakering on to drone base and sabotage drone wings, make weak. Suddenly both drone wings brake off under weight of Abu Recep and Abu Tayyip! They fall all way down to martyrdom, but so bravely we hear them cheering all way. At least we think it cheering.

Also even grater disastrous is that drone crash, and Armenistan get chance to claiming it shot it down, as big propaganda claim as big as capture of Azerbaijanistani capitalist Baku. So all air surgery strike plan stoppage until new drone with stronger wing brought. Until then we taking rock climbing lesson on broken village wall.

another butthurt Armenian in LA or Moscow, instead of fighting on the front he is asking Russians to fight for them.

What you saying Armenistani? You Armenistani! Genghis certificated instructor level Uighuristani headchopper! I run training coarse in headchoppering! You can joining if you want! Payment only one quarter goat a day.

Fascinating isnt it, but one thing do I know, Ruskies, this will one day come and bite your ass, mark my words, because you are and have shown to be rotten to your bone marrow, and have no credibility nor integrity left anywhere in your body or soul, it is, an revelation, if you had any doubts about Putin/Russia that should be now be completely erazed, I knew this would come one day into the light, and now it has, thank the lord for removing the shroud that clothed the vision, pure evil, is what I beholds, you didnt debate the stategics in Syria witch already then showed the treason, by siding with the Turdians, siding with ISISrael, where both benefitted from their pattsies, the ISIS/Whatever, and the sham war against them is to somehow think we are dumb enough to belive Putin/Russians are doing what they can, by dropping some bombs, while the back Turdians/ISISrael/ZATO/ISISI is their war on Armenia.

You must never ever again call your self christians nor humans, no human would sink to this debts when it comes to throw anyone under the buss, like Putin/Russia have done, and to then whine and try to deflect it with drivel makes it to me much worse, I can respect an enemy, much more than an traitore like the Russians are to day, shown us their true face, pity for those than think otherwise, because you have been blinded by people and sites like SF.
Never again talk about treaties, like they mean something, never again talk about respect of other nations intergity and suverenity, because you have non, never again say anything about international laws nor regulations because you have shown it your self you have non as to follow them in real life.

But this, right now, is the effect of treason, the coming wars and civil unrest in the caucasus and the Russian rim states will come and then it will dripp into Mother Russia, I am not sure I will be alive when that happens, time lines arent that easy to predict, but one thing do I see already, the downfall of Russia, because of treason, and the obvious ignoring of allies witch you claim you have, and like the UssA, once you have them by their balls, you trun everything around, like in Syria and Libya, the wars before that, we do know now why you didnt lift an finger, its become obvious.
You will reap what you saw, Russia, and no God will be at the side of traitores and oatbreakers, hypocrits and bigots, may you rott in hell, you will, but I know you dont belive that, I dont even care if you do or not, I know it is coming, and the enemy, like in the UssA, is within.

Its with an heavy hart I write this because I never expect Russia to fal this deep into the dark, its not about hate, nor am I angry, its just like watching a brother comitting an grave sin and you know you have to say something truthfull, and it will brake your hart.
This song I link to is beautiful, but its also an warning, never forget that Ruskies.
“Ой, да не вечер
https://www.youtube.com/watch?v=PwGMO9Y56B0

another butthurt armenian in LA or Moscow, instead of fighting on the front he is asking Russians to fight for them.

The most effective weapons in the Azer arsenal are Pashinyan and the
rest of the Soros coup leaders not air power. They got ride of all the
best Armenian generals intelligence officers etc. totally sabotaged the
army and air force.

If the USSA had the leadership of the Taliban and North
Vietnam betraying their own solders the USSA would have won both of those wars as easily as Azer is winning this one..

You
go Pashinyan hero of Azerbaijan!!! I hear they have cleared the way for
Azer to take Yerevan and they will all get medals from Azerbaijan.

Azerbaijan is making a new medal just for them called “hero’s of Azerbaijan and destrouyers of Armenia”.

For Putin, with a kiss from Erdogan.

Fog of War
Reply to  hvaiallverden

Scaathor
Reply to  Fog of War

Stupid Armenians… they bit the only hand in the region that might have protected them, yet they want to blame Moscow for their own geopolitical stupidity and utter lack of strategic foresight???

Ataturk-Hitler-Stalin – Who remembers the Armenians?

God-Justice-Truth – We do, and we won’t forget those who betrayed, crucified, and genocided
the Armenians, ever, the First Christian Nation.

Fog of War
Reply to  Stev60

” the Armenians, ever, the First Christian Nation. ”

Arent the oldest Christian monasteries and churches in Ethiopia ?

I am Romanian! We fought this muslim goat lovers of the mohamad the PAEDO for a looong time with namely the ottoman SCUM “empire” ! They will always remember Vlad the Impaler, Stefan the Great and Michael the Brave! We used to impale them on spears,cut their dirty empty muslim “heads”,poison the waters they drink,piss on their dead stinky muslim rotten “corpses” and set them on fire plus maaaanyyyyy other TREATS! :) We could go there in NK and DO this World SCUM again with no issues! The PROBLEM is that my beautiful GREAT Nation is now under the rule of the DIRTY, GENOCIDAL anglo-saxonkhazarian capitalist-fascistempire!!!! The SCUM western capitalist-fascist SHIT corrupted our people mind and hearts,our will to fight for the RIGHT cause,distorted our perception of To Be and replaced with the capitalist To Have and artificially placed on the top of the Nation docile sheeple as “leaders” who does nothing but serve the poisonous Empire who PARASITE My GREAT NATION and the rest of the World! My ancestors are the Great DaciansThracians the ones who RULED the whole Balkans up to Poland today ,Ukraine ,plus Hungary today plus down to Turkey today….The Great City of Troy (western Turkey today)was our lands too .When Greeks invaded it 2800 years ago my ANCESTORS flew to what is called Rome today and found it! Romullus and Remus sucking milk from the mother wolf(our Dacian God) were My People! (My grandfather was Romulus too). Then the Roman Empire grow Great and had fraticide wars with Dacia (my home in flesh and spirit) and we invaded(with the Romans) Anglo Terra (uk today) mixed with the barbarian wikinngs and gave them the latin language they do speak today….in few words Our Great History, Ancient and Sacred sound so… Wonder why we are called “Romania” today???? This comes from “romanus” which mean “citizen of Rome” in latin. By the way we the Romanians still we carry in our language at least 30% of what’s so called”latina vulgaris” which is the mother of modern Latin which was created artificially in order to make difference between the rich and working class Romans . God will sort this out! Amen

If you idiots wanted Russian support, you needed to stick your colours to the mast and not play the smart arse dickheads with your flirtations with NATO.

But you didn’t. You told Russia to take a hike and started sucking on NATO cock. Now you reap the rewards. Your new buddies NATO did absolutely NOTHING to protect Armenians while the Turks happily assisted their fellow Muslims.

Pashinyan is 100% responsible for this debacle. He alienated the only power that might have stood up for Armenia, and now you idiots need to own up to your stupidity and act accordingly.

NATO doesn’t give a flying fuck about you clowns. It just wanted to use you as a club to whack the Russians. Your only value to them was as pawns, willing and ready to be thrown under the bus… 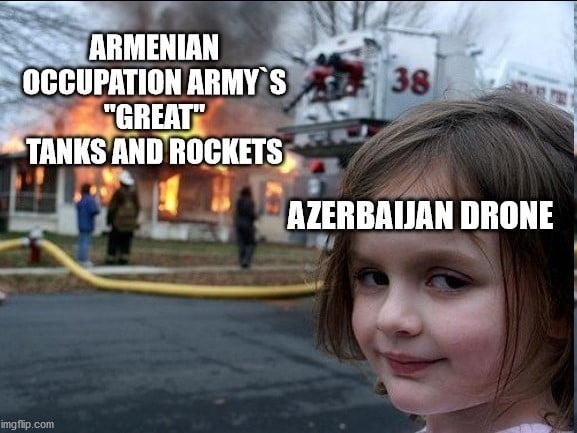 SF has provided decent reporting from both sides, while often unreliable—in this I reject partisans. this killing and destruction benefits nobody; zero natural resources and little arable land–good for Israel turk economies–both floundering…they do need to sell somebody their drones