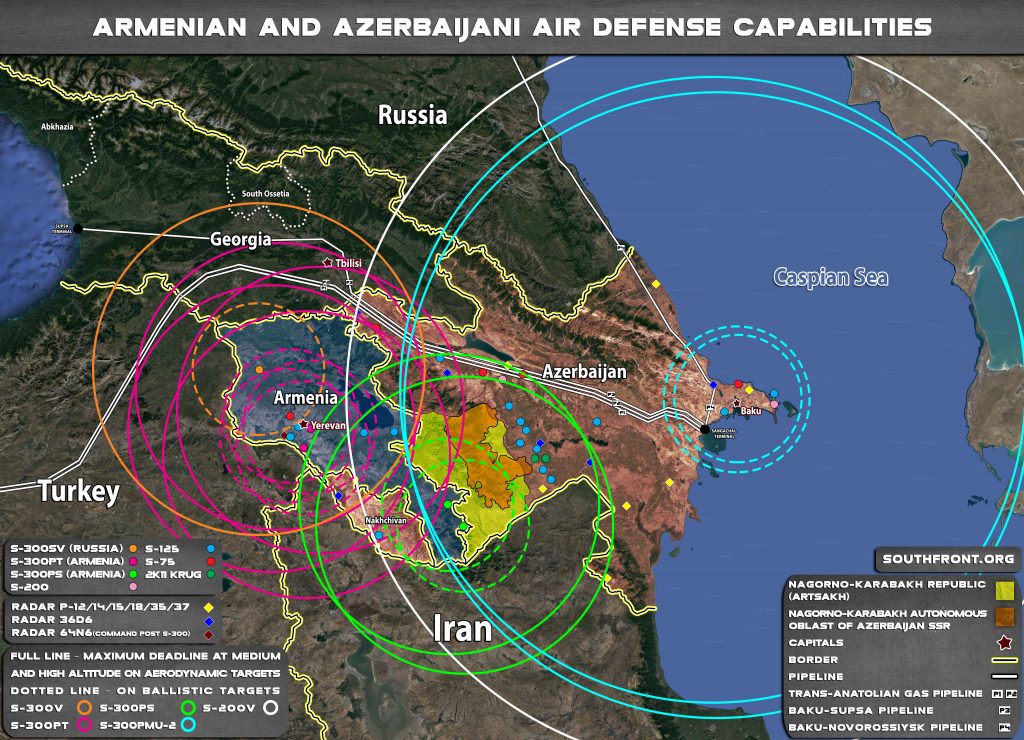 Azerbaijani air defense system is equipped with systems and radars of various types, capable of inflicting losses on its enemy, covering strategic facilities not only on the territory of Azerbaijan but also far beyond the borders of the republic. The anti-aircraft complexes and systems of medium and long range are deployed around military and industrial centers, aiming to prevent aircraft and combat helicopters attacks. They also have anti-missile potential.

During the Soviet period, the air defense of Azerbaijani territory, or rather of its oil fields, was of great importance. That is why a large number of military air defense facilities were established there. 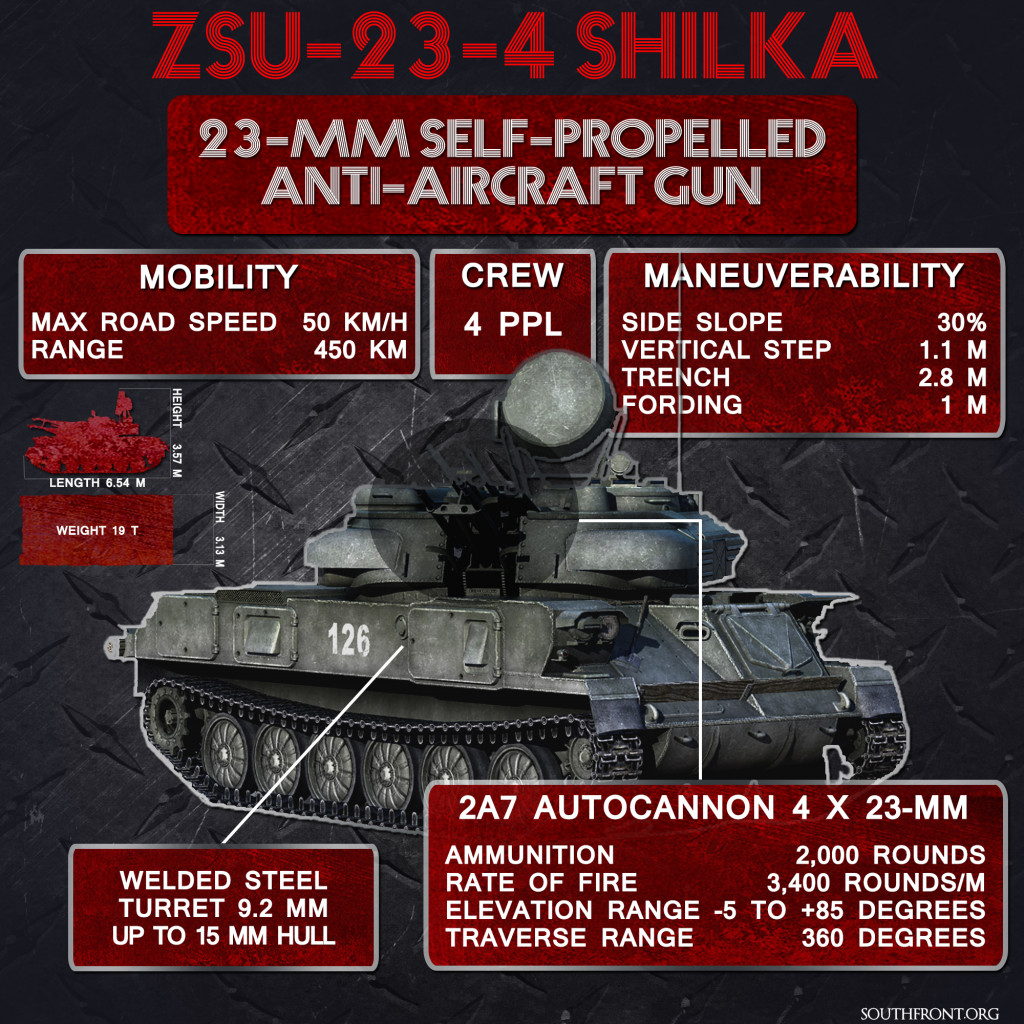 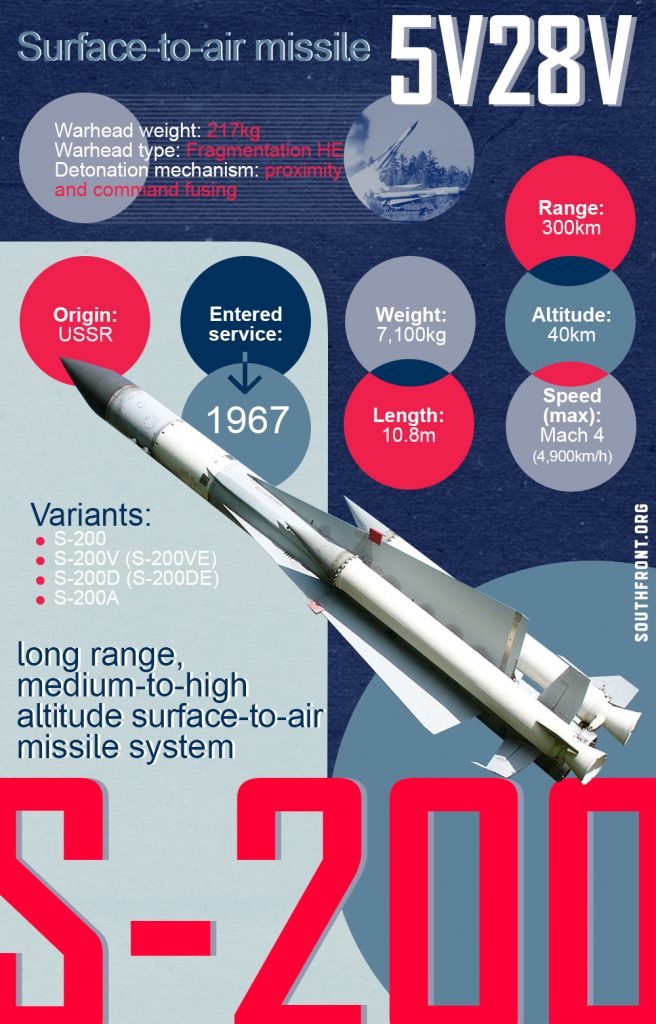 After the collapse of the USSR, С-75М2 / М3 medium-range complexes, low-altitude С-125М / М1, long-range S-200ВМ were in service with the Azerbaijani units in the Ayaty and Mingechaur regions.  Military medium-range air defense systems “Krug”, around 150 “Strela-2М” and “Strela-3”, 12 combat vehicles “Osa-AKM”, about 6 Strela air defense systems -10SV, and around 50 ZSU-23-4 “Shilka” were also inherited from the Soviet Army. 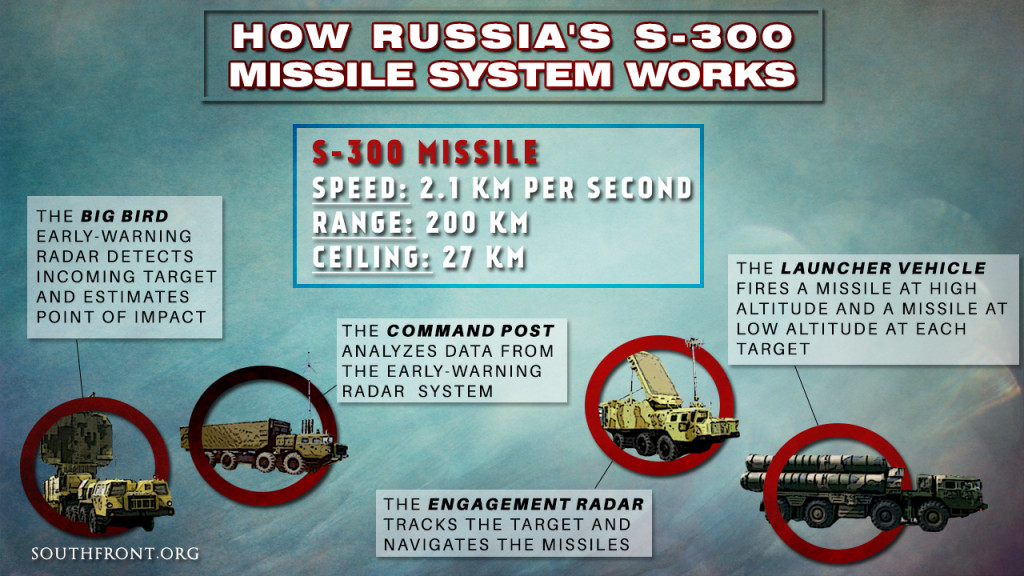 In 2012, Azerbaijan started purchasing of two C-300PMU-2 “Favorit” C-200 divisions from Russia, deployed in the western and eastern suburb of Baku. Two C-35ВМ anti-aircraft divisions of the long-range air defense system were spotted east of Baku. Azerbaijan also has in service at least one Russian-made division of the Buk M1-2 air defense system.

Baku is actively cooperating with Turkey and United States that are especially interested in data obtained by Azerbaijani radars on the Iranian, Russian borders and over the Caspian Sea. 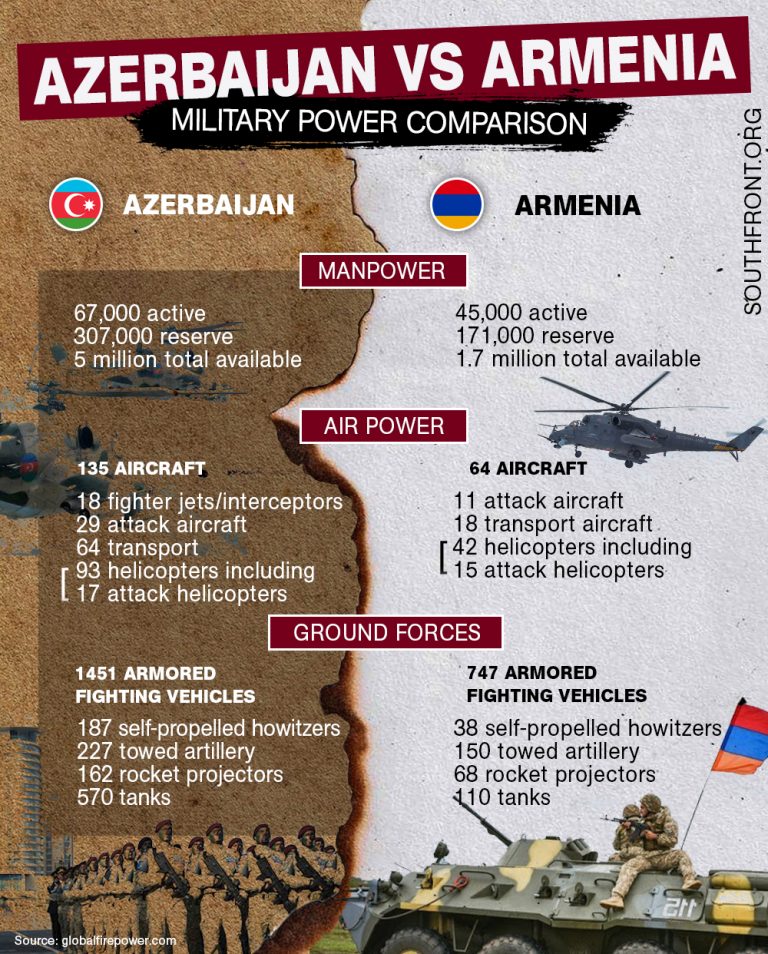 The comparison of Armenian and Azerbaijani military forces proves the Azerbaijani advantage. 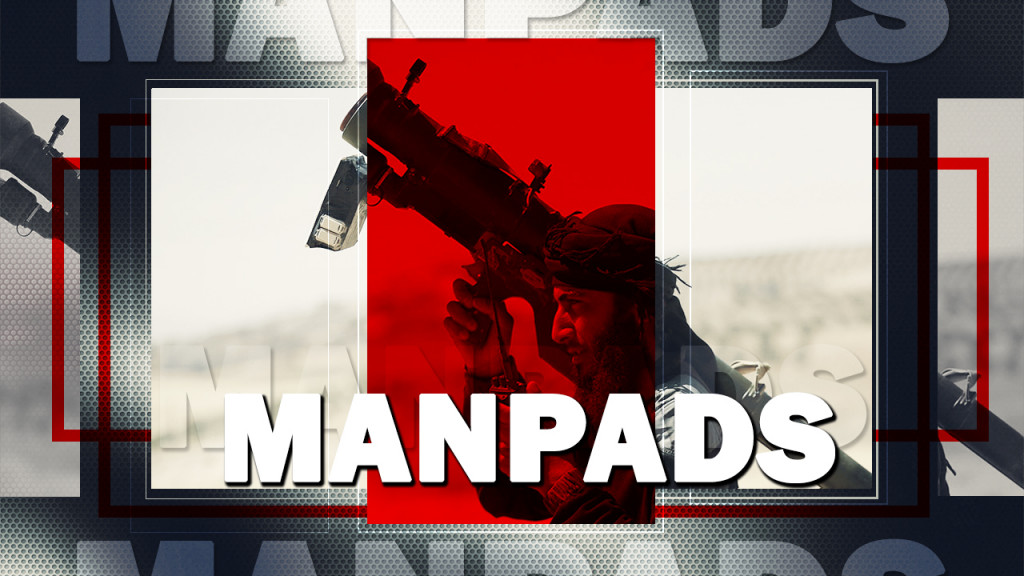 The current escalation of a military conflict in Nagorno-Karabakh unveiled that the air defense systems deployed in Armenia are not effective enough against Azerbaijani UAVs. On the other hand, they pose a real threat to manned military aircraft.

If Azerbaijan strengthens its air defense forces with international supplies from various countries, Armenian systems are Soviet and Russian-made.

In December 2015, Russian Defense Minister Sergei Shoigu and his Armenian counterpart Seyran Ohanyan signed an agreement on the formation of a “United Air Defense System” in the Caucasus. According to this agreement, the Russian and Armenian established the unified leadership of air defense and airspace control facilities and real time exchange information. 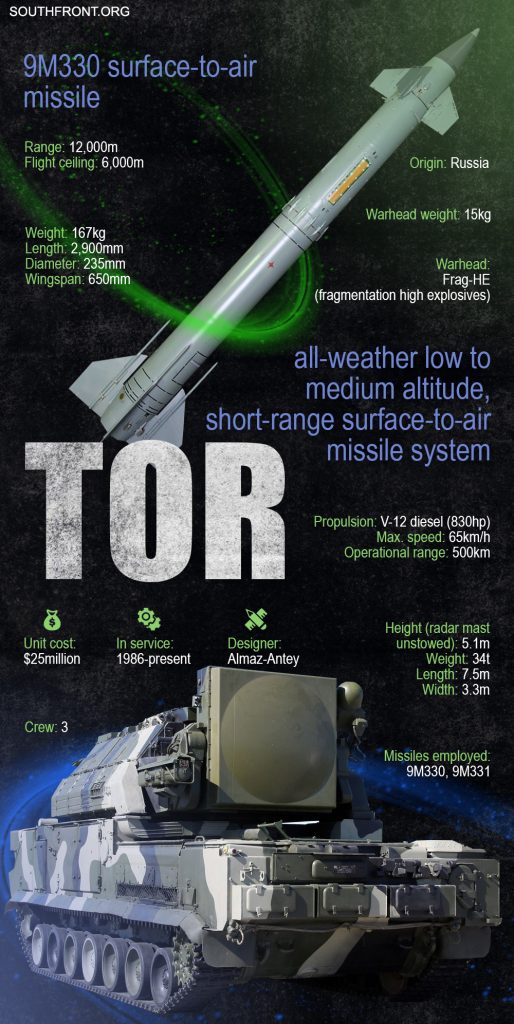 In 2019, Armenia announced that it had acquired the Tor-M2MK air defense systems from Russia that were first demonstrated in 2013. In 2017 it was deployed by the Russian military.

It seems that in the on-going military conflict, the Armenian leadership has relied on a military partnership with Russia. However, Russian military that is stationed at the Gyumri and Erebuni bases carries out a defensive mission and has no obligation to protect the territories of disputed region of Nagorno-Karabakh.

That’s for Israeli SS troops to protect them from children throwing stones at them.

you have been questioning yourself from right to wrong so much that became a nutcase. talking about Azerbaijan dude

Then why did you mention an Israeli system then in the first place you slowmo muppet?

You don’t really understand the English language, do you Slowmo.

The article is talking about the air defense of both side, though mentions only the Russian made systems, though Azerbaijan also has Iron Dome. Maybe they are made to catch the stones as you mentioned, but they are still there and for a proper article needs to be mentioned. Did my comment go through your dumb skull now, Mr. WrongAllTheTime?:))))

Take it up with SF, if they didn’t mention the system, then Azeri’s don’t have it you muppet.

Have you got that Randy Dude, now go play with some kids, like your Dad played with them.

That is why I wrote that comment, to take it up with SF. Then somehow you magically showed up with unrelated comments. Do yourself a favor and get lost. U r not smart enough for this conversation yet.

So take it up with them you stupid 3skinned arsehole.

Do humanity a favour, kill yourself and your whore Mom.

I am taking it up. You wrote on my comment thread, not other way around. How dumb are you?:))))

It’s not “your” comment thread you prick, it’s SF.

You Yids want to claim everything, without ever owning anything.

You commented under my comment. so yes it is my comment thread. you are welcome to do so if you don’t want to create your own thread, but don’t come crying when I prove you wrong. Right is not Wrong, you are wrong:)))

Go fuck yourself you 3 skinned clown.

hehehehe, you got angry. love it. write something else, give me more material.

He he he, you fucking goats again!.

Fingered, that’s what you normally do to kids.

Good to see you can’t stay away.

i love you too much, how could i leave you

I knew you were gay, but I’m not here to replace your favourite goat, so try your Turkish buddies.

They always have a spare goat or two.

leave the goat, i want piece of your ass:))))) I will make all the wrongs right for you

You just left the goat you got pregnant, and already dreaming of new and better things!

You can dream, but goats are the highlight of your life, forever.

Outside of fucking your kids.

I am coming after your ass. you will drop so many soaps with “uuups” shy face

Sure you are, why don’t you take a holiday to Galicia, meet and thank those heroes who fucked then burned your Grandad, lol.

They made soap out of him, you must be thinking of him soapy.

Galicia is still sanctioning you, and new Voldemort sanctions from Galicia coming as well. So no beach walks with you, but lets cuddle under the snowy nights

It hasn’t snowed here for 2 years Randy Pube, dream a new one.

Stick to your goat, at least you can tie him up.

I will bring snow for you. well, technically for your tight cute tushy.

Sure you will, if you can steal just 200 more goats, you might be able to afford a bus to an airport.

i will steal 400goats for you. your tushy is priceless for me

Here I am keeping you from your goat.

Bye bye now, wash yourself, for once in your life.

no need to wash, will leave it for you to taste, i know you are kinky and will love it

don’t leave, i need you, i need piece of your fine cute tushy, lets get funky together:)))

When are you coming, and I don’t mean up your goats ass?

Half of Turkey has already promised to come over, but no sign of them.

I will come so hard, convulsions one after the other

I don’t need to know what you are doing right now with your goat, though I wouldn’t blame him from convulsing with you stuck up his ass.

Your Moms ass never recovered from dropping you.

You were shat out ffs.

Maybe you are Turkish, as they all threaten to call, but like the cowards you are, never do.

doesn’t matter where I am from, what matters is where i will be. behind you and inside you at the same time, it will be amazing

Listen dickhead, isn’t it about time you got on your donkey cart and headed over here?

All talk, no action.

Just shut up and get over here you snivelling little prick.

Is that why you keep the soap around Randy Pube, to remind you of the family?

it will be a soft soap, ill use it like a lube on you. i think you are still tight, but not for long. im coming for you

Can’t wait to cut you into little pieces and post you home.

You do love the dirty talk, hears some words you often hear, Baa Baa .

i not only talk the talk, but also walk the walk

And you are as dumb as shit.

Iron Dome has never been sold abroad you dipshit.

You should know that, you live in it.

Any evidence of your stupid claim that Israel managed to sell Iron Dome?

Of course not, you lying prick.

Oh you want declassification of information on Israeli weapons sales? good luck with that:))))

Just you to prove that you know what you are talking about, but obviously you are a clown who just post BS without any knowledge at all.

your sentence doesn’t make any sense. care to edit or write again?

No difference, you never make sense. It’s because you’re a clown.

you shouldn’t drink so early in the morning

You shouldn’t drink at all, you desert people should stick to water.

we will drink together, lets do it

I don’t drink with goatsuckers, and you wouldn’t know what beer tastes like.

The desert people drink the piss from the skins they cut. Real men keep their skins, and drink beer.

beer tastes like piss, just colder. hot in the desert though. come on lets share a pitcher together. though im sure you prefer a holy water

That’s what your Dad told you it was, beer.

He was just getting you pissed, before riding you.

Is your ass still sore, though by now you are well used to it.

i am indeed used to it. it was amazing, i will show you the same pleasure. come to papa, i will fly you to the moon

You can’t fly to the moon you schmuck.

You need a Russian rocket. Like your buddies in Idlib get often.

tell me about your russian rocket, is it long? is it hard? is it thick? lets fly together

This war is about to resolve on ground fights…

What the hell is this? Are you trying to spam? Find another place for this!

Tajikstan, Serbia and Belarus (CSTO members) could form an ideal observer and peacekeeping force for the conflict so that both warring parties (Armenia and Azerbaijan) can gather their thoughts and resolve matters.

This war has a tendency to spillover and escalate to parts unknown. A sad tale for all humankind to ponder upon in the coming decades…