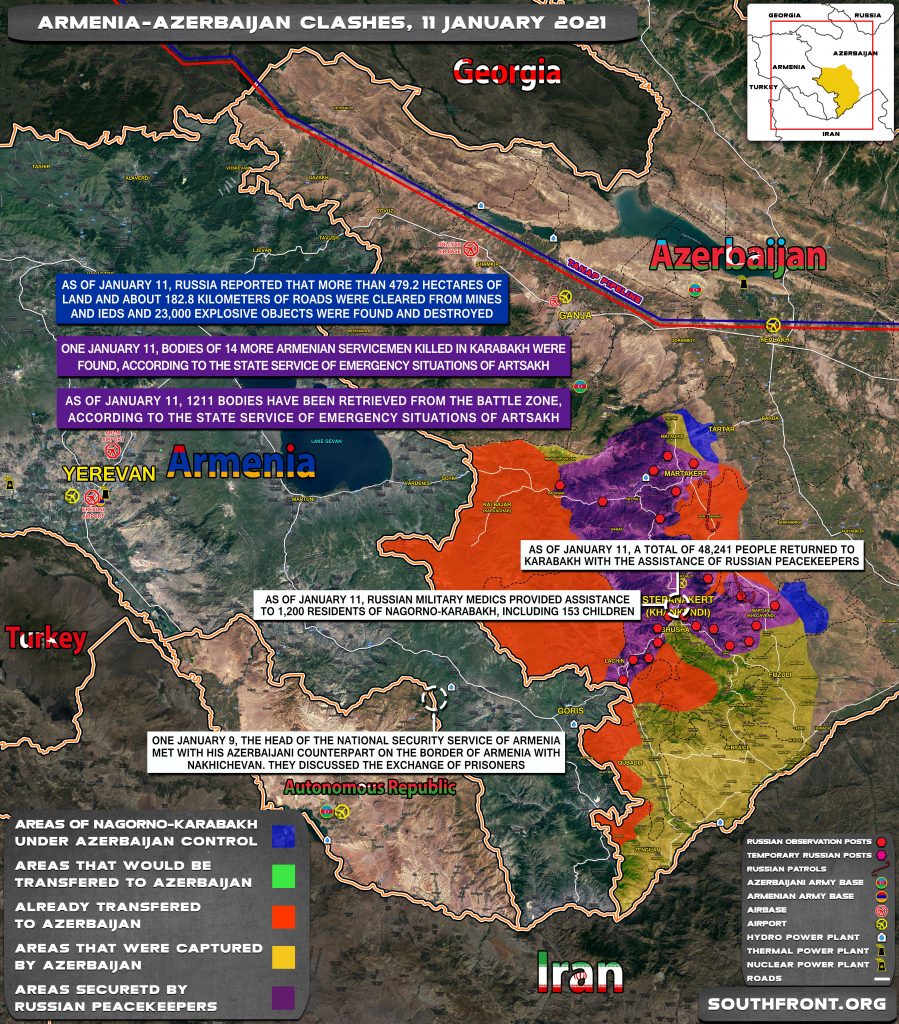 Armenia will get a railway connection with Russia through the territory of Azerbaijan, Azerbaijani President Ilham Aliyev revealed following the trilateral talks between the leaders of Azerbaijan, Armenia and Russia in Moscow on January 11.

In his words, the opening of communications in the region meets the interests of Azerbaijan, Armenia and Russia. Aliyev said that he hopes that neighboring countries will also join in the creation of transport corridors in the region.

The trilateral working group on the Nagorno-Karabakh region will present a list and schedule of measures for the development of transport infrastructure on that territory, according to a statement published following the talks of Azerbaijani President Ilham Aliyev, Armenian Prime Minister Nikol Pashinyan and Russian President Vladimir Putin.

The the working group will submit a list and schedule for the implementation of relevant measures for approval by the parties at the highest level by March 1, 2021. These measures will involve the restoration and construction of new transport infrastructure facilities necessary for the organization, implementation and security of international transportation through the Republic of Azerbaijan and the Republic of Armenia. Co-chairmen of the working group will be the deputy prime ministers of Azerbaijan, Armenia and Russia.

Russian President Vladimir Putin added that he thinks that the settlement in South Caucasus will be beneficial for relations between Moscow and Baku and contribute to the settlement of the conflict in Nagorno-Karabakh in general.

“I hope very much that settlement efforts in South Caucasus will be beneficial for our bilateral relations,” he said during talks with Ilham Aliyev. “I am convinced that this settlement will make our ties even closer, making it possible for us to build our relations on a more systemic basis not only in the economic but also in the humanitarian sphere.”

“Relations between Russia and Azerbaijan are now developing quite successfully,” the Russian president noted, adding that it is especially applicable to economic aspects as the two countries “have a lot of common areas of work and a lot of converging economic interests.”

“The major event of last year was the difficult situation and its difficult development in Nagorno-Karabakh,” Putin said. “I would like to express satisfaction that we have managed to stop hostilities, to stop bloodshed.” He also noted the role of the Russian peacekeeping mission, saying that the “situation is generally normalizing.”

“It is of paramount importance that today we have signed a joint statement resting on the commitment to a lasting resolution,” the Russian president emphasized.

The reopening of transport links in the region is one of the key provisions of the Russian-sponsored Armenian-Azerbaijani ceasefire. At the same time, the implementation of the deal itself still faces some difficulties and the real ceasefire in the area will be not possible without the Russian peacekeeping mission.

The status of Nagorno-Karabakh still remains the key source of contradictions between Yerevan and Baku.

Slick.Like i said best leave it to the real statesmen to get things done right,musk fanboys harden the fk up!

Wuld be great to see this evolve to include Iran and link the Caucasus and Caspian basin to the Persian gulf and Indian ocean, overland routes through central Asia will be a risk as long as the US/ISIS Ziocorporate terrorists are dealing heroin and destroying stability in Afghanistan.

Wuld be great to see this evolve to include Iran and link the Caucasus and Caspian basin to the Persian gulf and Indian ocean.

It did already happen as Russia, Azerbaijan and Iran signed a deal for new modern railway linking Iran and Russia through Azer. Its why Azer got the green light to attack Armenia from Iran and Russia in the first place.

I didn’t know fairytales were real until I read this. Put down the bottle

Wow I guess you can’t read.

Armenia will get a railway connection with Russia through the territory of Azerbaijan, Azerbaijani President Ilham Aliyev revealed following the trilateral talks between the leaders of Azerbaijan, Armenia and Russia in Moscow on January 11.

They had a very well established network in China during the opium trade and they ran the Chinese Communist party in the beginning.

So they still have some influence there.

Armenia under Soros was following very anti Russian and Iran policies are you not aware? They were fed up with the Zio Armenian Soros puppet government. Azer saw their chance and improved relations with Iran and Russia to get the green light to get their lands back.

When revisionism goes wrong. Stay off the drugs son. Green light lmao! And also Iran had no dog-fight in this. Azerbaijan has defense treaty with Turkey while Armenia with Russia. These were territories illegally held by Armenia and Russia couldn’t intervene due to the legal status of Azerbaijan since it was Azeri lands. The Land was taken back by force from the Armenians basically who refuse to surrender it by talks. Russia’s defense treaty with Armenia extends only into proper Armenia not NK

Wow another one who is really dumb that imagines they are smart.

https://www.azernews.az/business/109949.html 9 March 2017 12:07 (UTC+04:00) By Amina Nazarli Railway delegations of Azerbaijan, Iran and Russia met at a tripartite meeting in Moscow on March 7 to sign a memorandum on of cooperation in the field of railway transport.

The sides considered general tariff for the railway for 2017. Following the talks, the three parties signed an agreement to reduce the railway transit tariff.

Sure this is great diplomacy? They get a link to Russia but they will lose N.K.

Did that to themselves.

Yes their government is idiotic and criminal, like many others but they were all alone with no one coming to help. Where as Azerbaijan had big brother Turkey and behind Turkey NATO. This wasn’t a fair fight.

The best bit cia has no powers,either way the future is with real world trades,not fake x n stocks! With russian backing diplomacy,Armenia will be far better of here on in the long term,it will all blow over sooner than later.

Putin and erdogan bringing eurasia right to europes doorstep,no going back here on in.enjoy the show: