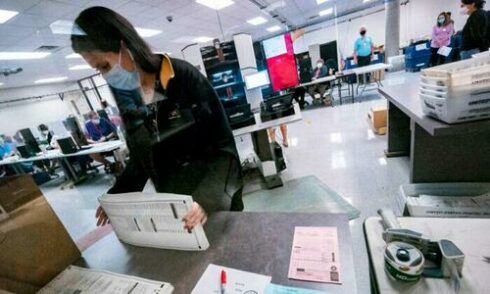 A report compiled by 11 RNC lawyers who witnessed widespread issues in Arizona on Election Day 2022 reveals that Maricopa County had far more problems than they are reporting.

The 11 attorneys visited 115 out of the 223 vote centers in Maricopa County on Election Day and found that 72 of them (or 62.61%) “had material problems with the tabulators not being able to tabulate ballots,” Sonnenklar reported, “causing voters to either deposit their ballots into box 3, spoil their ballots and re-vote, or get frustrated and leave the vote center without voting.”

Box 3 — also called “Door 3” or “Slot 3” — is a separate box on the tabulators into which ballots not counted by the machines were placed for later tabulation. Maricopa County, however, has admitted that “in some voting locations, ‘Door 3’ non-tabulated ballots were commingled with tabulated ballots,” according to a letter from the Arizona attorney general’s office to the county. -Just the News

“In many vote centers, the tabulators rejected the initial insertion of a ballot almost 100% of the time, although the tabulators might still accept that ballot on the second, third, fourth, fifth, or sixth attempt to insert the ballot,” reads the report. “However, many ballots were not able to be tabulated by the tabulators at all, no matter how many times the voter inserted the ballot.”

Meanwhile, 51% of voting centers had “significant lines,” with many voters waiting multiple hours before receiving a ballot.

A letter from Arizona Assistant AG Jennifer Wright to the Maricopa County Attorney’s Office notes that the department had “received hundreds of complaints,” including “first-hand witness accounts.”

According to the letter, some of the information is “[b]ased on sworn complaints submitted by election workers employed by Maricopa County” and “the plethora of reports from election workers, poll observers, and voters.”

The letter gave the county until Nov. 28, the day counties are required to certify their elections, to respond. -Just the News

Of note, Maricopa, Cochise and Mohave counties have all decided to delay the certification of their elections until the Nov. 28 deadline due to the irregularities in Maricopa.

By now the fake democracy uses all means ………….in order to avoid true democracy. Call them scoundrels if you like.

I call them more than that. I knew they would cheat, they HAD to.

Anyone with a legal vote got to vote! That’s a good thing. The people saved themselves from inbred idiots, good for nothing and fit for the bin from siezing power in many positions. The American people were the victims of Republican genocide during Covid and now the republican party is getting what it deserves.

A mid-term disaster for the thieves of the republican party who only want to give money to billionaires globalists the Military Industrial Complex and Israel.

The people showed these fools just what they think of them.

Dirty Dems couldn’t have won without cheating. Refer to 2016 primaries for example.

I don’t get you, the fact is both parties are the same…

Both suck Israel and are owned by Military Industrial Complex.

Under Trump, the Republican Party emerged as the Peace Party in America. During his administration, there were no wars in the world. That is not a coincidence. Trump Republicans want to improve conditions in the US, and not interfere with other nations.

Gosh, the libtards have been fiddling the votes again, LOL.

The USA is one big fubar that’s in its death throes.

The criminally insane now run the asylum. I dare say that we have seen nothing yet.

Why are comments being censored on Southfront

I’ve had a few instances where my comment would not post. Perhaps they are having a problem with the trolls and some legit postings ain’t making it.

No Peter its up and posted on the site until someone reads it and decides to remove it. Perhaps they have issues with my left of centre views

And US neocons want to export this ‘democracy’ model throughout the world! This model starts with the use of overwhelming force to subjugate weak nations.

What a fuck up america has become. Maybe it had to happen sooner or later.

I cannot say what went down in this election but I do know that election rigging actually happens. I saw it first hand in 2018 when Tim Canova supposedly lost to Debbie Wasserman Schultz. https://www.youtube.com/watch?v=_Lfg7e-sMOU

Anyone can see that US elections are severe ly tampered with. Tge US has absolutely no credibility anymore…..